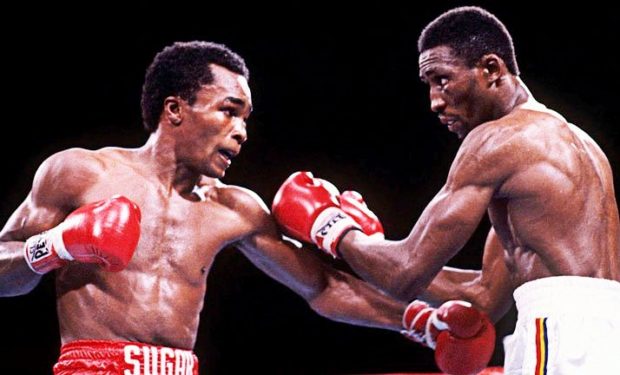 By Rafael García @RamblerRambling · On December 4, 2020

No matter how you break it down, Errol Spence vs Danny Garcia has one major thing going for it: it’s one of the best matches that can currently be made in the welterweight division. Okay, yes, we know, it’s not “the best” fight the 147 pound class can offer; that, of course, would be Spence vs Terence Crawford. And yes, Spence vs Manny Pacquiao, or Spence vs Yordenis Ugas, or Spence vs Keith Thurman, are all arguably more intriguing match-ups than Spence vs Garcia. But this is boxing, the 21st century version. You take what you can get.

Still, it’s a solid match-up and with a little luck we might get a fight to remember. And such hopes naturally turn one’s thoughts to other great tilts we’ve seen in the welterweight class. Which in turn brings us here: a ranking of the greatest scraps the division has ever seen, the biggest and best battles at 147 pounds, the cream of the crop. Here’s hoping Spence and Garcia shock us all and put on an amazing donnybrook that can take its place with these classics. Check ’em out:

12. Jose “Mantequilla” Napoles vs Emile Griffith—October 17, 1969: At the famed Forum in Inglewood, California, Emile Griffith got a shot at unified champion “Mantequilla” Napoles before a hostile crowd of over fifteen thousand. A clash of two Hall of Famers saw the Cuban-Mexican “Mantequilla,” smooth as butter, adroitly handle the aging Griffith, earning a unanimous decision and avenging the defeats of his fellow Cubans, Benny “Kid” Paret and Luis Rodriguez, at the hands of the rugged Griffith. 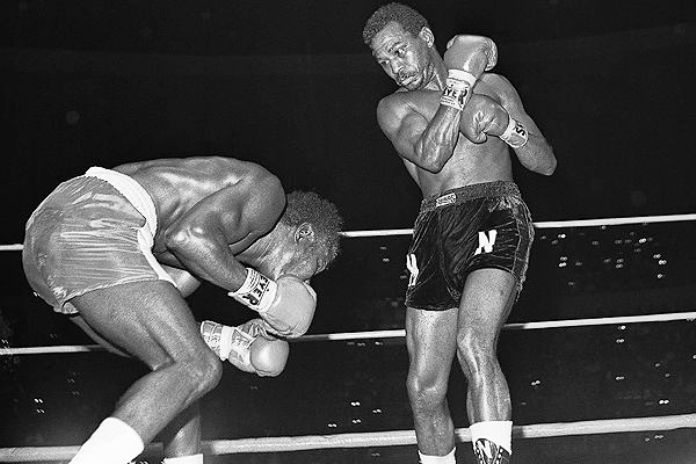 11. Manny Pacquiao vs Miguel Cotto —November 14, 2009: A sell-out crowd at the MGM Grand and millions more around the world saw Cotto and Pacquiao fight on even terms early in a fierce toe-to-toe battle. But Manny soon proved too quick and explosive for the Boricua, sending Cotto to the canvas twice before taking complete control in the middle rounds. A retreating Cotto weathered the storm until the twelfth, when the referee decided to end what had become a prolonged beating for the proud Puerto Rican. The outcome represented a historic seventh world title for the Filipino marvel and the pinnacle of Pacquiao-mania.

Paquiao vs Cotto: The peak of Manny mania.

10. Mickey Walker vs Jack Britton II—November 1, 1922: In one of the most momentous “Old Dog vs Young Dog” confrontations in the history of the sport, the 37-year-old Britton granted the 22-year-old Walker a rematch after drawing with the future great in their first fight. A packed Madison Square Garden witnessed and celebrated Britton’s courage, as he endured the ferocious assault of the determined “Toy Bulldog” for fifteen punishing rounds. The champion would visit the canvas three times before it was all over, with Walker earning the undisputed welterweight title via unanimous decision. 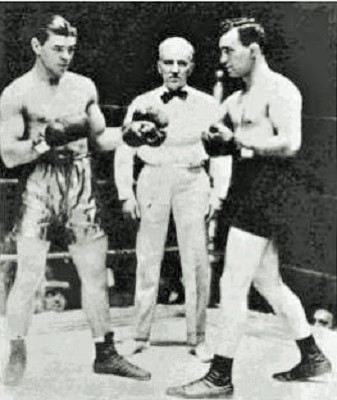 Walker and Britton square off.

9. Carmen Basilio vs Tony DeMarco II—November 30, 1955: Appearing in front of a wild home crowd, DeMarco wanted badly to avenge his previous knockout loss to Basilio. And if their first fight in New York had been a simmering engagement, the rematch at the Boston Garden was nothing short of incendiary. By the middle rounds DeMarco’s power punches had Basilio in serious trouble, but the indomitable New Yorker willed himself back into the contest, fighting fire with fire and earning a stoppage after dropping DeMarco twice in round twelve. Hailed by Ring Magazine as The Fight of the Year.

Basilio celebrates after knocking out DeMarco

8. Shane Mosley vs Oscar De La Hoya —June 17, 2000: “The Golden Boy” was looking to redeem himself after his controversial loss to Felix Trinidad; “Sugar” Shane Mosley wanted to make himself not just a former champ and a top talent, but a major attraction. Everyone in boxing knew this was a dream match between two of the best, pound-for-pound, both in their primes, clashing for world title belts. A huge crowd showed up for the biggest fight of the year and all got their money’s worth as Oscar and Shane put on a tremendous display of high-octane boxing. It was fast-paced and highly competitive all the way, but it was “Sugar” Shane who rallied in the late rounds to secure a razor-close points win. 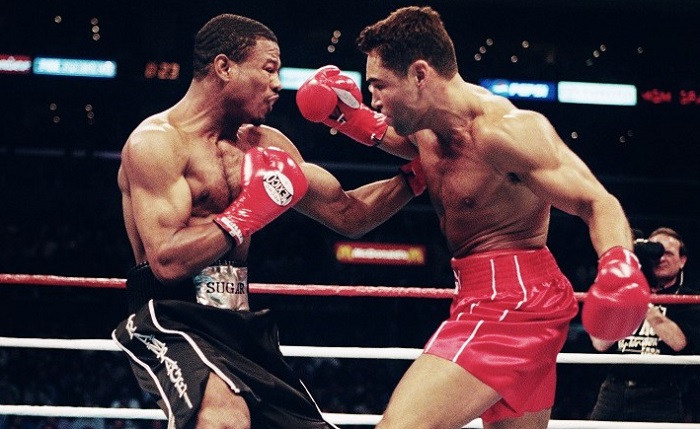 7. Sugar Ray Leonard vs Wilfred Benitez —Nov 30, 1979: A dream-match between gifted boxers, Benitez vs Leonard saw the 23-year-old “Sugar” Ray challenge the 21-year-old Puerto Rican phenom for the WBC world title on live, prime-time television. It was an intense tactical battle at Caesars Palace in Las Vegas, with the pugilists jousting for position and working to foil the other man’s attack, a task made more difficult by both combatants’ prescient reflexes and amazing counter-punching abilities. In the end, Leonard earned his first title thanks to his hand-speed advantage and excellent finishing instincts as he forced a dramatic stoppage in the final seconds. 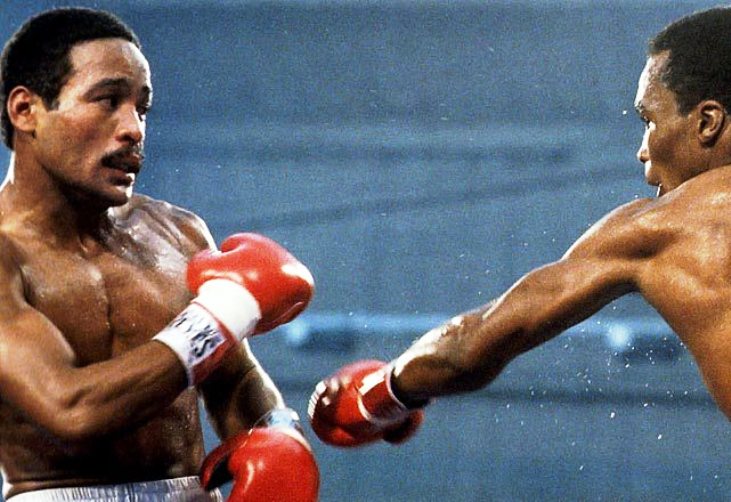 6. Sugar Ray Robinson vs Kid Gavilan II—July 11, 1949: In front of almost thirty thousand sports fans at Philadelphia’s Municipal Stadium, the original Sugar Ray defended the welterweight crown against the great Gavilan, who came up short in the rematch after giving the champ all he could handle the first time around a year before. Robinson suffered a cut over the right eye early on, which stubbornly bled throughout the rest of the contest, but in the end the class of Ray was the defining factor that earned him a hard-fought points victory over “The Cuban Hawk.”

5. Pernell Whitaker vs Julio Cesar Chavez—September 10, 1993: “Sweet Pea” and “El Cesar del Boxeo,” two of the very best of their era, matched pugilistic wits before 60,000 frenzied fans in San Antonio, Texas. Despite the lofty pedigree enjoyed by both fighters, the contest was more controversial than competitive as the gifted Whitaker clearly outboxed Chavez for the better part of twelve rounds, leaving the great Mexican confused, frustrated and reliant on the judges to grant him an infamous draw, a verdict so irreverent it even drew the ire of many Mexican fans in the Alamodome that night.

4. Barney Ross vs Jimmy McLarnin I—May 28, 1934: The first bout of the epic Ross vs McLarnin rivalry took place at the Madison Square Garden Bowl in front of more than, wait for it, sixty thousand paying customers. Making the first defense of his title against Ross, McLarnin failed to adapt to the challenger’s double whammy of tremendous activity and acute ring smarts. The verdict was a split decision after fifteen fast-paced and highly competitive rounds, the verdict crowning a new champion. McLarnin would regain the title in the second meeting, only to surrender it again to Ross in a third very close battle. 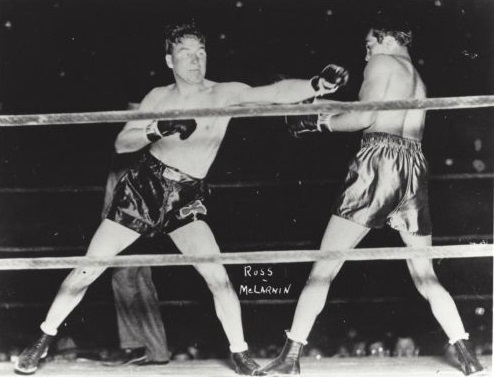 3. Sugar Ray Robinson vs Tommy Bell II—December 20, 1946: It was the great Sugar Ray’s long-awaited and overdue ascension to the welterweight throne, a truly historic match, not to mention an action-packed battle. And it was no routine coronation for the legendary Robinson as Tommy Bell was no pushover and the fifteen rounder at Madison Square Garden ranks with the toughest and most exciting battles of Sugar Ray’s amazing career. A left hook dropped Robinson in the second, but in the eleventh it was Ray who sent Bell to the canvas. Momentum shifted often in this thrilling, action-packed affair that saw Robinson take a unanimous decision and with it, the title. Finally. 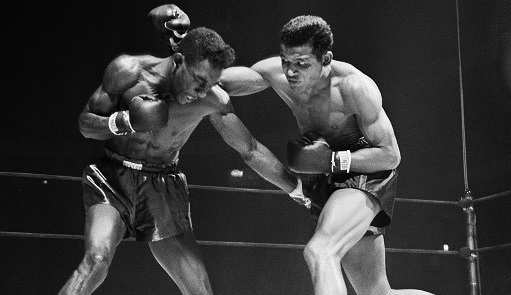 2. Sugar Ray Leonard vs Tommy Hearns—September 16, 1981: With Sugar Ray and “The Motor City Cobra” each holding a version of the title, Leonard vs Hearns was a fight to decide the one true king as well as the best boxer in the world, pound-for-pound. Hearns took the early lead, but Leonard turned things around in the sixth with a two-fisted attack and forced “The Hitman” to stick and move. Behind on points in the late going, Leonard rendered the scorecards meaningless with a withering attack in round thirteen and the bout was stopped in the following round with Hearns taking a pounding on the ropes. The thrilling clash was viewed by a sell-out crowd in Caesars Palace and millions watching via closed circuit television. 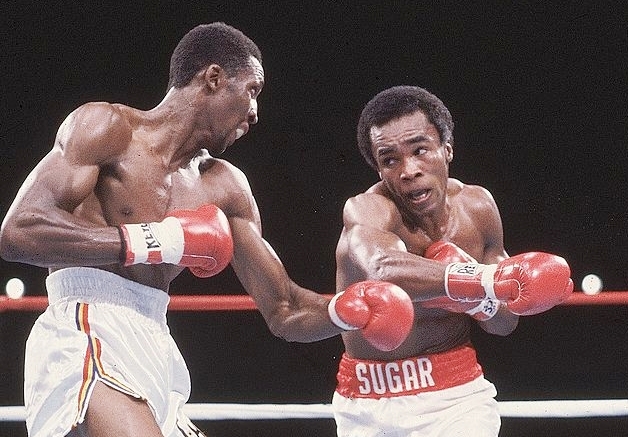 The Hitman and Sugar Ray gave fans a thriller.

1. Roberto Duran vs Sugar Ray Leonard—June 20, 1980: The first monumental “superfight” of the new post-Ali era, the most eagerly anticipated prizefight since Ali vs Frazier III, Duran vs Leonard captured the pubic’s imagination like few fights before or since. More than forty-six thousand fans jammed Olympic Stadium, and millions around the world sold-out entire arenas for the closed-circuit telecast, all eager to watch “Manos de Piedra” challenge the undefeated Sugar Ray. Surprisingly, Montrealers rooted for the wild Panamanian, not for the champion who had enjoyed such great success in the Montreal Olympics four years prior. In the end, Leonard’s courage, speed and talent were not quite enough to overcome the tactical mistake of going toe-to-toe with a Duran who was in excellent condition and driven to secure the biggest win of his career. After fifteen torrid and truly thrilling rounds, not to mention two of the very best performances ever from a pair of all-time greats, the close decision went to the legendary Panamanian. 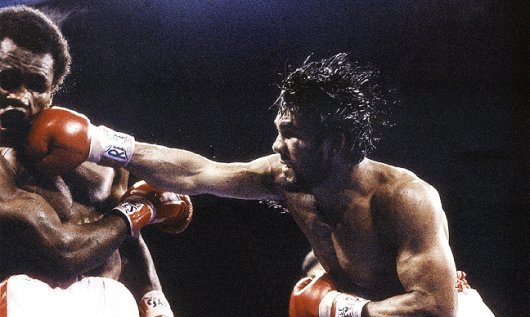