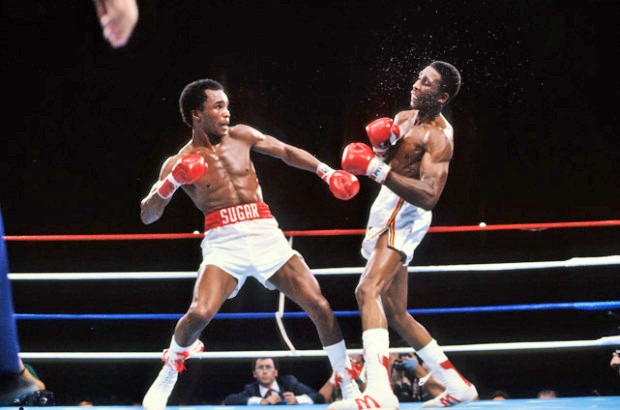 In the summer of 1981, only two boxers mattered in America: WBA welterweight champion Thomas Hearns, and WBC welterweight champion Sugar Ray Leonard. Since the previous fall, when both men won huge fights – Hearns knocking out the dangerous Pipino Cuevas; Leonard forcing the great Roberto Duran to quit — this was the biggest match boxing could offer, the contest the whole world wanted to see. 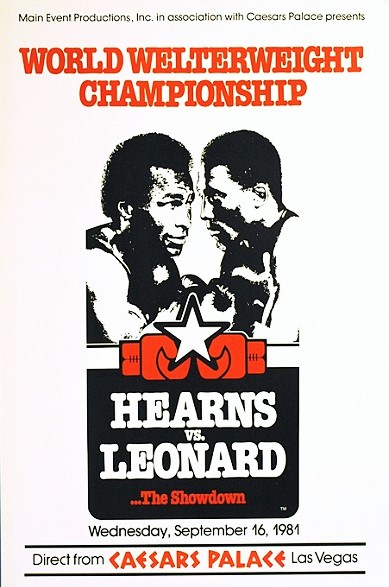 It was the classic confrontation: boxer vs puncher. Leonard filled the former category, his fast feet and faster hands thwarting even the toughest fighters, as all saw in his rematch with the dangerous Duran. Hearns was the knockout artist, the fearsome puncher they called “The Hitman.” He boasted a thunderous right hand and 30 knockouts in 32 wins.

The backgrounds and personalities of the two champions contrasted sharply as well. Sugar Ray, the Olympic gold medalist, enjoyed celebrity status, his dazzling smile selling cars and soda pop. Hearns was more stoic, soft-spoken, exuding an air of mystery and menace. A native of Detroit, his climb up the ranks, while just as fast and impressive as Leonard’s, was also more blue-collar, unaided by constant television exposure and lucrative endorsement deals. 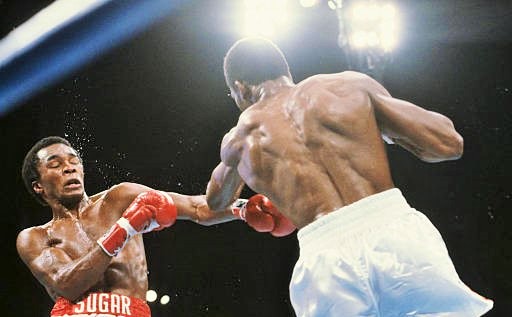 Billed as “The Showdown,” Leonard vs Hearns was finally set and few fights in boxing history aroused such anticipation. Millions crowded into closed-circuit theaters around the world while ringside seats sold for record sums. And to everyone’s delight, the dramatic battle lived up to the hype. Though not in ways fight fans could have expected. Two factors no one anticipated defined the match: not Hearns’ punching power, but Leonard’s; not Leonard’s technical boxing ability, but Hearns’. In other words, a reversal of roles. 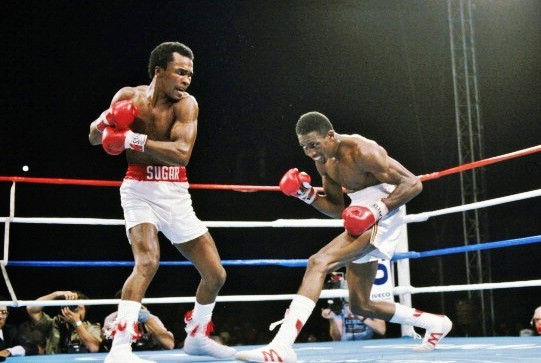 The first five rounds were razor close but belonged to “The Motor City Cobra,” his 6’1″ height and 78″ reach enabling him to land his jab and control the tempo. These rounds were an agonizing exercise in suspense as the fighters, feinting and jousting and probing for openings, tested each other, the crowd waiting to see what would happen when the stalking “Hitman” finally landed his cannon-like straight right. But in round six it was Sugar Ray who struck first, connecting on Tommy’s chin with a wicked counter left hand, and the legs of “The Hitman” buckled. For the rest of that round a stunned Hearns was battered with power shots, Ray landing vicious hooks to both head and body. 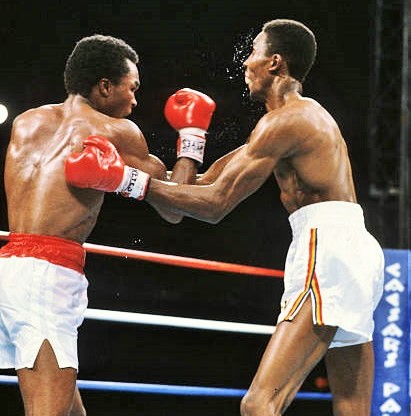 If round six was a bad dream for Hearns, the seventh was a nightmare. Now showing little respect for Tommy’s power, Leonard pursued aggressively and early in the round took a huge right from Hearns. Nothing happened. Instead, Sugar Ray just kept coming, throwing heavy shots to the body to set up a beautiful uppercut-left hook combination that had Hearns reeling about the ring again. An overhand right almost put Tommy down and the crowd in Caesars Palace went berserk as Leonard chased and pounded his hurt opponent from corner to corner. 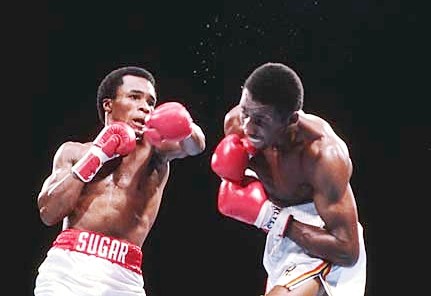 Thanks only to Tommy’s fighting heart, the knockout didn’t happen. And now it was time for the trainers of these two champions to play their parts in this unlikely drama. While the highly experienced Angelo Dundee anchored Leonard’s corner, Hearns’ trainer and manager, Emanuel Steward, was a relative newcomer on the big-time boxing scene. Boss of the Kronk Gym in Detroit, Steward had trained Hearns since he was a kid, had taught him the fundamentals, and now he urged him to abandon the ring style of the knockout artist to go back to them. “You’ve got to be the boxer now,” said Steward. “Get on the bicycle. Stick and move.”

The next three rounds were a strange sight to anyone even barely familiar with the natural styles of the two fighters. Instead of Hearns stalking, it was Leonard. Instead of Leonard moving and staying one step ahead of the dangerous puncher, it was Hearns. The surprising fact borne out by this complete reversal was that Leonard’s power, often underrated, proved just as deadly as The Hit Man’s. But now Sugar Ray had fallen victim to the puncher’s common mistake, looking for the one big shot instead of working the opponent and letting the knockout come naturally. Plodding after Hearns, and again having trouble getting past those long arms, Leonard allowed The Motor City Cobra, who just a few minutes ago looked finished, to regain his momentum. 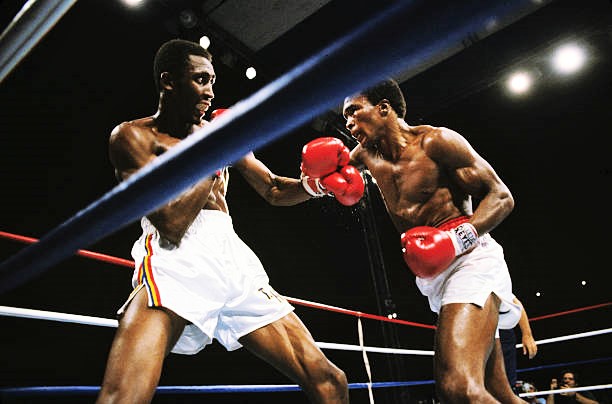 By the tenth, Tommy’s strength and confidence had fully returned and in the eleventh he took control, dictating the terms behind that long, snapping jab and finding openings for the right. Near the end of the round a right lead followed by a sharp left jolted Leonard, punctuating a round which signaled another plot twist in this unpredictable drama. In the twelfth the crowd was chanting “Tommy! Tommy!” as Hearns pursued, while Leonard, his left eye badly swollen, appeared tentative, confused, his face bearing the wide-eyed look of a lost man scrutinizing a bus schedule. At the end of the round, Hearns marched with obvious confidence back to his corner while Leonard trudged wearily back to his. 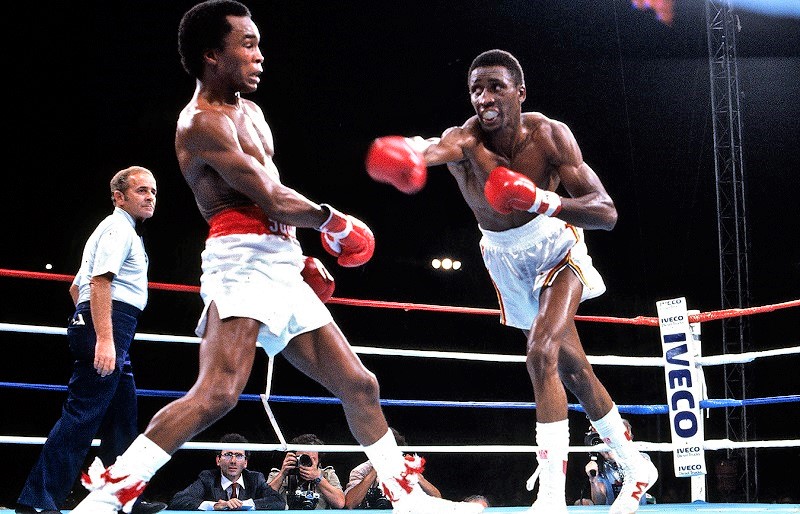 Now it was time for Angelo Dundee’s pivotal scene and yet another turning point in this dramatic struggle. The trainer of some fifteen world champions and a peerless cornerman, Dundee laid it on the line in terms Leonard could not ignore: “You’re blowing it now, son, you’re blowing it. … We need fire and you’re not firing! You’re blowing it … Ray, you’ve got to be quicker! You’ve gotta take it away from him! Speed!”

And with that, Leonard sprang from his stool to start round thirteen, no longer tentative, but taking the fight to Hearns with urgency and eventually landing a crunching right hand over Tommy’s low left. For the first time since the seventh, Hearns’ legs buckled and Sugar Ray didn’t let “The Hitman” off the hook. An astonishing, rapid-fire flurry of twenty-five unanswered punches had Hearns dazed and staggering. He fell through the ropes twice before the round ended, and it was courage alone that allowed him to survive.

In round fourteen that same courage kept Hearns on his feet though in fact he had nothing left. Sugar Ray was landing shots at will and beckoning to referee Davy Pearl, who finally did step in to raise Leonard’s hand. No one questioned the stoppage. “When I didn’t hear anybody shouting at me from Hearns’ corner,” said Pearl, “I knew I had done the right thing.” 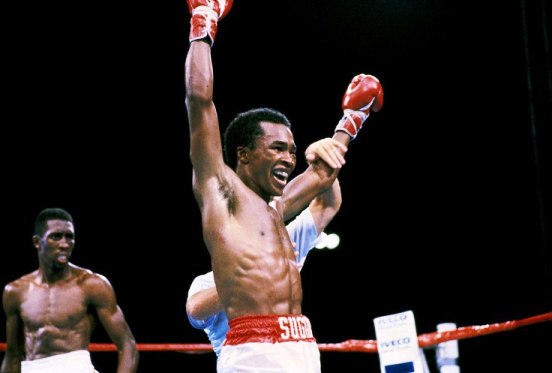 In terms of twists and turns, it was a drama worthy of Sophocles, and the excitement and action demanded a rematch. Unfortunately for Thomas Hearns, and boxing fans everywhere, it would be eight long years before these two great talents clashed again.            — Michael Carbert 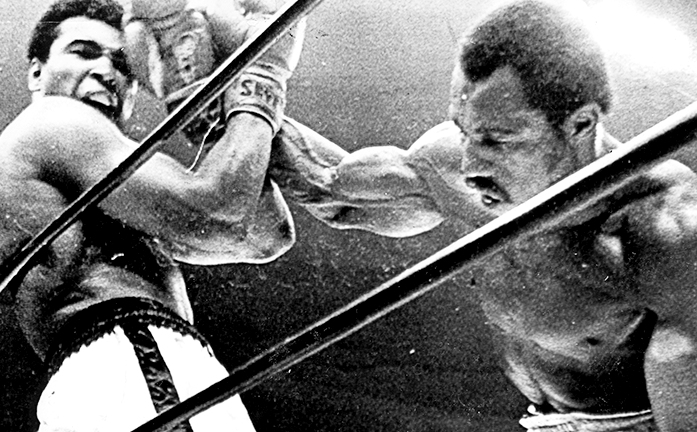 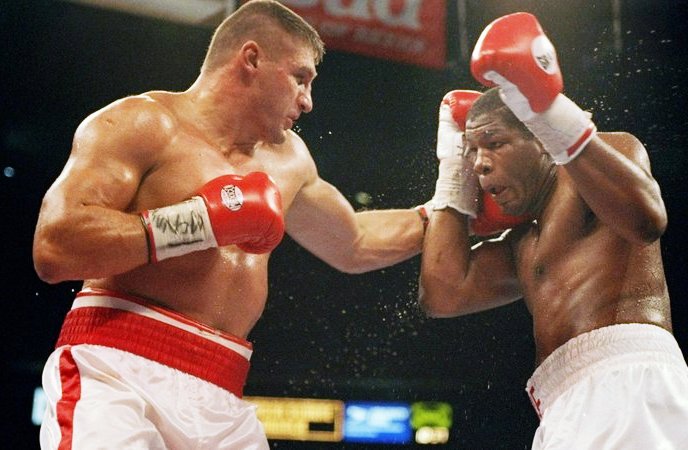 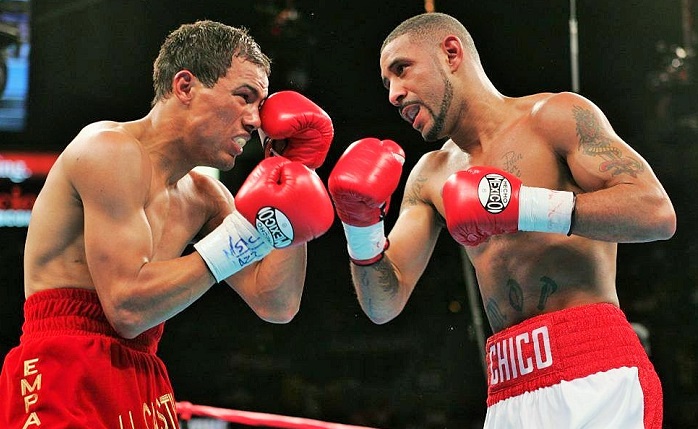