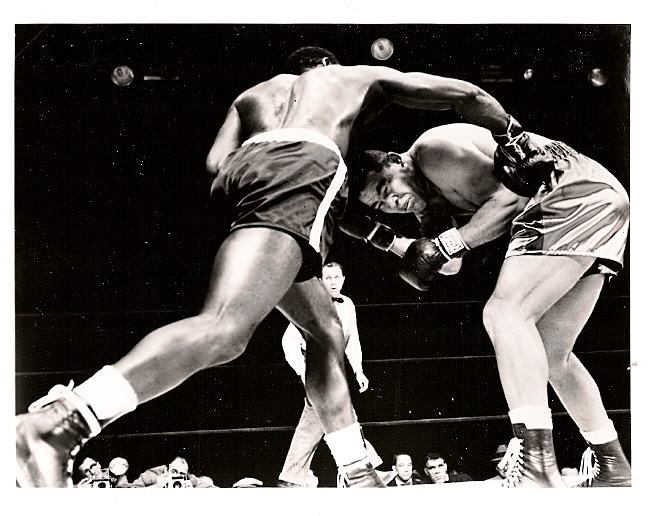 There’s little doubt that Ezzard Charles is one of boxing’s most underrated champions. A skillful technician, he holds wins over a long list of great fighters and he surely deserves to be better recognized for his achievements. However, the problem was that Charles’ reign as heavyweight champion of the world followed that of a living legend, the enormously popular Joe Louis.

It was a chance encounter with Cuban featherweight sensation Kid Chocolate that first made Charles want to be a fighter. It was August of 1932 and the ‘Kid’ was due to face journeyman Johnny Farr in Charles’ hometown of Cincinnati. The young Ezzard was so impressed with the beautifully tailored suit worn by the famous champion that he decided then and there he wanted to be a prizefighter.

It wasn’t long before Charles found a new idol though, one he felt better represented him, one he could relate to on a more personal level. Enter Joe Louis.

Louis, like Charles, had faced many of the same struggles growing up as a young black man in America and he had proven that despite the obstacles, the glory and the riches were attainable, at least if you were a fighter. He was an idol for so many black kids of the time, Charles included. Charles’ love for “The Brown Bomber” inspired him to spend countless hours listening to fights on the radio and in 1936 he decided to join a local boxing gym. Little did the young Ezzard know, he would forever be linked with his boyhood idol when all was said and done.

By 1948 Charles had more than proven himself a master boxer. He had the footwork of a dancer, threw his punches with pristine technique and speed, and if he wasn’t the most powerful of punchers, his excellent timing enabled him to knock out his share of opponents. Despite not getting a shot at the title in the lower weights, his heavyweight campaign gave him hope. He was scoring wins over men much bigger and heavier and soon there was talk of a showdown with the great Joe Louis.

After a win against fellow contender Joe Baksi on October 12, 1948, Charles was asked his thoughts about the possibility of a fight with the champion and his response was more befitting a boy who idolized Louis rather than a man who was a contender to his crown: “I don’t know about Louis. I’d have to be in better shape for the champ than I was for this thing. Then, too, you know how I feel about Louis. I’d rather not meet him. Cause after all…well, he’s the champ, that’s all.”

In March of ’49 Louis decided to retire and turn to the work of promoting fights. In conjunction with Jim Norris and Arthur Wirtze, he set up the International Boxing Club. The idea was to create a monopoly and own the rights to all heavyweight title fights. In order to designate a new champion, the I.B.C signed four of the top contenders to contracts, Gus Lesnevich, Jersey Joe Walcott, Lee Savold and Ezzard Charles, and then held a tournament to decide Louis’ successor.

Ezzard Charles became heavyweight champion of the world on June 22 in 1949 when he won a unanimous decision over Jersey Joe Walcott but few fans were overly pleased about it. Charles lacked power, they said; he’s too careful, they said; he’s not really the champion, they said. In fact, Ezzard Charles was a more than worthy champion; he just wasn’t Joe Louis.

Charles made three defenses of his title, against Gus Lesnevich, Pat Valentino and Freddie Beshore but it was even clearer now that the public just wasn’t all that keen on the new champion. The Lesnevich fight drew a poor crowd, the fight against Valentino, the first in the Bay Area since Jack Johnson beat Stanley Ketchel back in 1909, saw Charles introduced first and heavily booed by a pro-Valentino crowd, while the Beshore fight set a record for lowest attendance at a heavyweight title bout, with just over six thousand people turning up.

Louis, the people’s champion, had been busy himself. He was officially retired but fighting exhibitions with impressive regularity and according to all reports, wasn’t exactly taking it easy on his opponents. It was becoming apparent he was ready to make a comeback, a fact all but confirmed on the night of December 7, 1949 when Louis and Pat Valentino took part in a ten round exhibition in Chicago.

With Charles sitting ringside, Louis took the fight to Valentino and, according to a New York Times report, could have easily put Valentino away early but chose to send a message to Charles instead: “To experienced observers, it was apparent from the fourth round that Louis could have finished Valentino any time he decided to open up. When he finally did, Louis poured in deadly punishment at his old-time speed and precise timing.”

Afterwards, when asked whether or not he thought Louis would return, Charles replied: “Joe is certainly going through all the motions of a man who is going to stage a comeback. I think he will.” Six months later, it was official: Joe Louis was back and he wanted his crown. The public wanted to see their hero back in the ring, while Ezzard Charles was keen to show them he was the true heavyweight king.

Louis was favoured by odds of 2-to-1 on fight night and, despite his time out of the ring, he was confident of a victory when he spoke with James P. Dawson of The New York Times: “I don’t feel this is a comeback. I just feel I took a short vacation from the title and during that time I was boxing between fifty and sixty exhibitions. I will enter this fight in excellent shape, the best I have been since the war. I expect to win by knockout.”

Louis may have felt he was in his best shape since the war but the scales said otherwise. He weighed in at 218 pounds, the highest of his career, while Charles weighed 34 pounds lighter at 184.

Most of the boxing fraternity expected a Louis victory. Former champion Gene Tunney , claiming that Joe’s advanced age meant little, went on record saying that Louis would win by knockout in five. “If Jack Dempsey is not the greatest fighter who ever lived, then Joe Louis is. There is no reason to think, because Louis is 36, that he has not retained the skill and power that he had when he retired.”

One fighter who was a little less inclined to pick a winner but was even less sure of a Louis victory was Sugar Ray Robinson. He spoke with the New York Times a week before the bout. “Ezzard Charles is the most underrated fighter I know. Charles is in superb fighting condition. I refuse to go out on a limb in predicting what the outcome of his fight with Louis will be but I’ll say this much, Ezzard looks very good to me.” 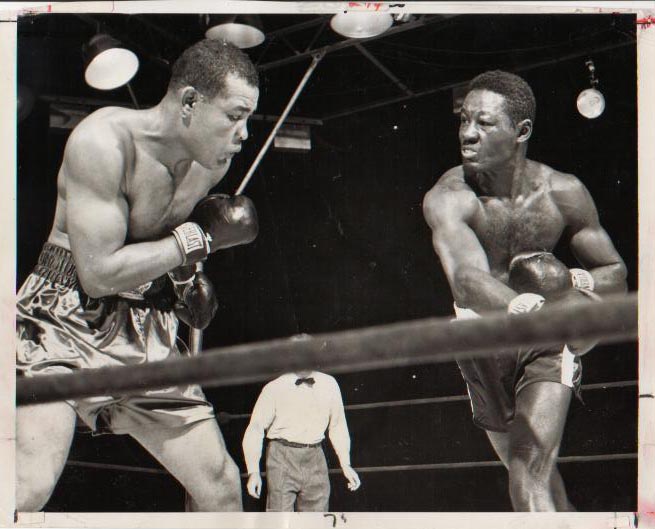 On September 27, 1950, Ezzard Charles did what so many before him couldn’t do: he out-boxed, out-maneuvered, outlasted and won a decision victory over the great Joe Louis, becoming the only man to go the full fifteen rounds with “The Brown Bomber” and win.

The match itself showed just what a master of The Sweet Science Charles was as he bested Louis in every facet of the contest. He beat the ex-champion to the punch while slipping the big bombs from Joe, punches that many before him had struggled to avoid. His footwork befuddled the bigger man and kept him off balance for most of the fight. He even had the Bomber in serious trouble and on the verge of a knockout in round 14, but Louis held on. The judges scored it unanimously: 10-5, 13-2 and 12-3.

Louis, whose face was swollen and bloody, refused to come to the microphone after the bout and was clearly heartbroken by the outcome. Charles, on the other hand, was jubilant. His comments however, showed his humble side and he was quick to praise Louis, who he had idolized all those years ago: “I’d like to give thanks to God for giving me the strength and courage to win the fight, and since I won the championship I feel very proud about it. I’ll try and do my very best to keep it as clean as the previous fellow who just stepped down.”               — Daniel Attias 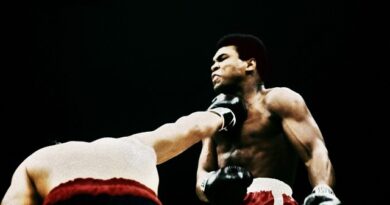 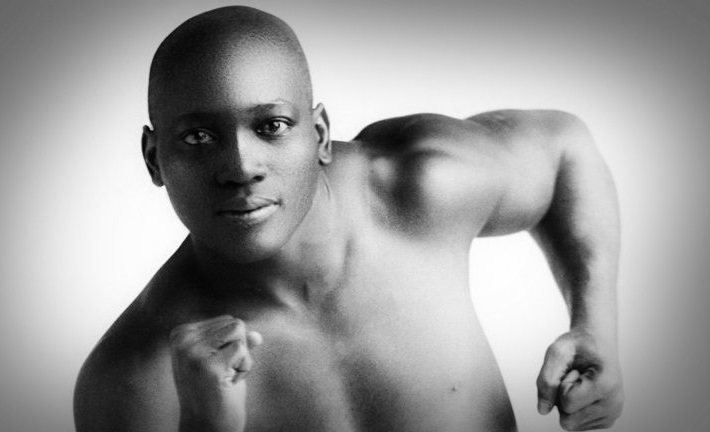