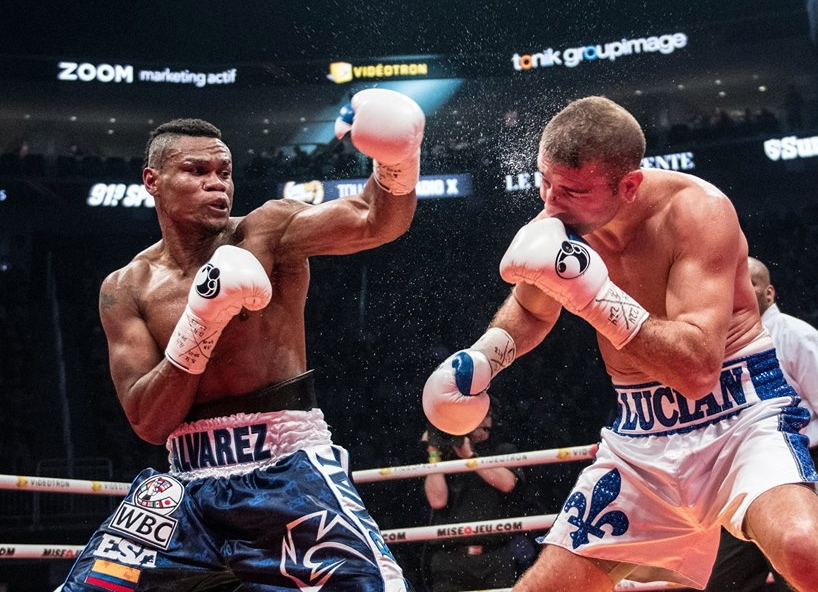 Lucian Bute vs Eleider Alvarez was a fight no one saw coming and one that promised to provide answers to a pair of burning questions: Could Alvarez finally deliver an explosive performance to cement his elite status? And was this the last stand for Bute, a former super middleweight champion and one of Montreal’s most beloved fighters?

Well, both questions were answered in a fight that saw Eleider Alvarez knock Lucian Bute out at 2:22 of the fifth round in front of a stunned audience at the Videotron Centre in Quebec City.

While this match between two sometimes cautious fighters had the potential to be a stylistic bust, it got off to a positive start with Alvarez shooting his straight right hand at the southpaw Bute within the first 15 seconds. Bute looked to connect with his patented left hook/uppercut to the body, but Alvarez, who has been tentative in the past, was clearly in rhythm.

As rounds two and three unfolded though, Bute started to spend more time on the front foot. He also began to find a home for his straight left hand upstairs, and he was able to mash left hooks into Alvarez’s belly in the clinch. After his uncharacteristically brash start, Alvarez suddenly seemed content to fight in retreat and attempt to lure Bute into a right hand counter.

Feeling confident after a fourth round that saw him outwork Alvarez, Bute seemed to be wresting control of the fight after landing consecutive straight left hands. But then, less than a minute into the fifth, everything changed. Alvarez, who started the stanza on the attack, caught Bute napping and landed a cannonading overhand right that badly wobbled the Romanian. Alvarez pounced, connecting with yet another spearing right hand and a follow-up hook grazed Bute as he collapsed to the canvas.

Bute, brave as ever, gamely tried to rise, but his legs were jelly and the referee wisely called a halt. And just like that, the match that no one saw coming came to a violent conclusion in a way no one had predicted. For Alvarez, the win was clearly cathartic, as he’s lived in Lucian’s shadow for years and he can now look forward to a big showdown with Adonis Stevenson. As for the former IBF super middleweight champion and the fighter who has carried Montreal’s boxing scene on his back for years, his fighting future, if there is one, is completely uncertain.

Bute was supremely classy and respectful of Alvarez at the post-fight press conference, acknowledging his foe’s strength and skill while thanking the fans, who have unconditionally supported him for over a decade. However, though he made it clear that he needs a substantial break to assess his future, Bute asserted that he isn’t concretely considering retirement in wake of this defeat. “I was in the fight,” Bute said. “I felt very comfortable, but he caught me with a good right hand. This can happen in boxing.”

That said, with a child on the way and a record of 1-2-1 since his loss to Jean Pascal, one has to wonder where Lucian Bute goes from here. Indeed, the argument might be advanced that he was fighting above his natural weight and that he could still be a factor at 168 pounds, but the evidence is thin. That Bute can still hang with the likes of James DeGale and Badou Jack is a testament to his abilities, but he’s at the stage now where the state of his career is mired in existential questions about its ultimate purpose.

Promoter Yvon Michel echoed as much, stating that he is advising Bute to take a lengthy hiatus and contemplate his next move. He also reminded the assembled media that no one can deny Bute’s myriad accomplishments, and he made sure to clarify that the former champion was ahead on two of the three scorecards at the time of stoppage. And yet, the proceedings carried a sombre air, which was entirely expected given the respect everyone has for Bute.

The evening, though, belonged to Eleider Alvarez, who finally delivered the explosive performance fans have been craving. At the presser, an ebullient Alvarez talked about how he relished the pre-fight pageantry, remarking how listening to the Colombian anthem, which he hadn’t heard before a fight since his amateur days, provided added motivation and reminded him of the fight’s magnitude. 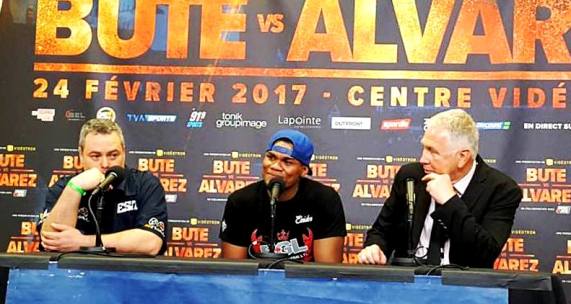 In the ring after the fight, Alvarez talked about the significance of this win for his family, as this was a career-high purse for the contender who has seemed to be stuck in neutral for years. That, however, is no longer the case because Alvarez produced a best case scenario victory, scoring his first stoppage since June of 2015. Bute was the naturally smaller and older man, and the only way Alvarez could have used this fight to burnish his elite credentials was to dominate. Mission accomplished.

As ever, credit is due to Yvon Michel and his matchmakers for putting on an entertaining undercard, which featured a pair of slugfests and some showcase bouts for emerging prospects.

2016 French Olympian Christian M’Billi (2-0) may only be 21, but he has the finishing instincts of a far more seasoned fighter, especially with his punch distribution between head and body, as well as his managing of distance. In his second fight in as many weeks, M’Billi made it two-for-two in both wins and stoppages, halting Jesus Olivares (5-4) in three punishing rounds.

Much like his pro debut, M’Billi started slowly, absorbing shots off his high guard while he established his left hook to the body, which he consistently doubled up. He also appeared unable to miss with his overhand right, punishing Olivares with the thudding shot repeatedly until the referee mercifully intervened. M’Billi may leave himself open at times and load up on his punches with youthful exuberance, but he’s a legitimate bluechip prospect.

Dario Bredicean (12-0) scored a dominant eight-round unanimous decision over a game Alejandro Torres (9-2-2) in a bout that featured slick boxing and a steady increase in aggression from the Florida native as the fight wore on. The southpaw Bredicean started the contest working behind a long jab, which he shot well to the body. Dario hurt Torres with a left hand downstairs in round three, and he would follow that up with a cuffing shot to score a knockdown in the ensuing stanza, although it could have been ruled a slip.

Bredicean did well to target the smaller Torres’ chest and midsection to avoid getting caught reaching, and he began to time Torres with check right hooks as the Mexican launched desperate attacks. The seventh was Bredicean’s best round, as he blasted Torres into the ropes with a straight left hand, throwing lead lefts and hurting the Mexican again to the body. Although he couldn’t score the stoppage, Bredicean was in complete control.

Local hero Sebastian Bouchard (15-1) outpointed Gustavo Garibay (13-8-2) via clear unanimous decision in a bout that settled into a repetitive cadence: a wild Garibay gamely applied pressure, only to swing at air as Bouchard peppered him with right crosses, head-rattling counter left hooks, and sweeping body shots. Bouchard also did well to slip punches to his left and walk Garibay onto stinging right hands, although the Quebecer was perhaps too content to box off his back foot in rounds seven and eight.

Both Adam Braidwood (7-1) and Eric Martel-Bahoeli (11-7-1) deserve immense credit for their heavyweight slobberknocker, which saw Braidwood score a stoppage in the fifth round despite a nasty gash over his left eye that prompted a brief intervention from the ringside physician. The action started to intensify as early as round two, but it boiled over in an absolutely surreal and wild fourth stanza.

With a flurry of punches Braidwood backed Martel-Bahoeli into the ropes and then shoved him clean through them, prompting an admonishing from referee Alain Villeneuve. Braidwood then tattooed Martel-Bahoeli with a battering ram right hand and pressed for the stoppage of his cornered foe. Martel-Bahoeli rallied, only to get clocked again, which prompted him to turn his back and slump over the ropes just as the round was ending. In an odd scene, Villeneuve carried a drunkenly swaying Martel-Bahoeli back to his corner.

The official end, and the end of Martel-Bahoeli’s career, would come at 2:01 of the next round, when, following an initial knockdown, Braidwood connected with a left hook thrown akin to swinging an axe, which chopped at Martel-Bahoeli’s chin. Martel-Bahoeli stumbled halfway across the ring and face-planted, giving the charismatic and gregarious Braidwood a victory that has put him on plenty of people’s radars.

Lastly, fan favourite and all-action warrior Francis Lafreniere (15-5-2) is now both the IBF International and WBO NABO middleweight champion after edging past the savvy and gritty Uriel Gonzalez (15-2-1) via split decision (98-92, 96-94, 95-96) in a brutal contest that featured hellacious in-fighting, multiple momentum swings, and non-stop pressure from the dogged Lafreniere.

One could actually make a compelling case that Gonzalez landed the cleaner, more eye-catching shots, as the Mexican did an admirable job of throwing combinations and maintaining distance for key flurries as the bullish Lafreniere waded inside. Lafreniere, though, was able to set up shop in the trenches and rip thudding body shots and his spearing right uppercut. After perhaps conceding the first two rounds, Lafreniere employed more effective upper body movement and wobbled Gonzalez in a neutral corner in the third. Not to be deterred, Gonzalez found a home for his counter left hook upstairs, and he was able to land that same shot underneath Lafreniere’s right elbow, painting an angry red orb on the Quebecer’s rib cage.

The sixth round was absolutely breathtaking, as both men unleashed seemingly impossible torrents of power punches. Both boxers found themselves on the back foot, only to rally and reverse the tide. Lafreniere was buckled along the ropes, but he countered with a windmill overhand right that got him out of trouble.

With the bout hanging in the balance, the difference down the stretch, and in round ten in particular, was Lafreniere’s unwillingness to take a backwards step. Lafreniere actually started his rally by landing a hip shot on the referee’s blindside, and he spent the rest of the final round throwing combinations with his head against Gonzalez’s chest. A strong case could be made for a Gonzalez win, but there was no controversy here. Francis Lafreniere worked his ass off and pressed the action, making him a deserved victor in a brutal and very close bout.

But back to Lucian Bute and Eleider Alvarez for a moment. Many have mixed feelings about all-Montreal match-ups, as the city’s boxing scene, while blooming, is not at the point where fans are eager to see the loser of a local showdown get discarded. This, however, is the encouraging stage our great fight city has reached.

So, while it’s tempting to lament what we’ve lost in seeing Lucian Bute struggle to rise from those brutal Alvarez right hands, let’s focus on all he’s given us and how without him Montreal would not be on the precipice of a new boxing Golden Age. And, more importantly, give Eleider Alvarez his due. The much-maligned Colombian produced a career-best, statement performance when he needed it most, and, in what amounted to a true trial by combat, proved that now — at this specific moment in time — he, not Lucian Bute, is the Montreal fighter ready for his close-up on the biggest stage. Bring on Adonis. 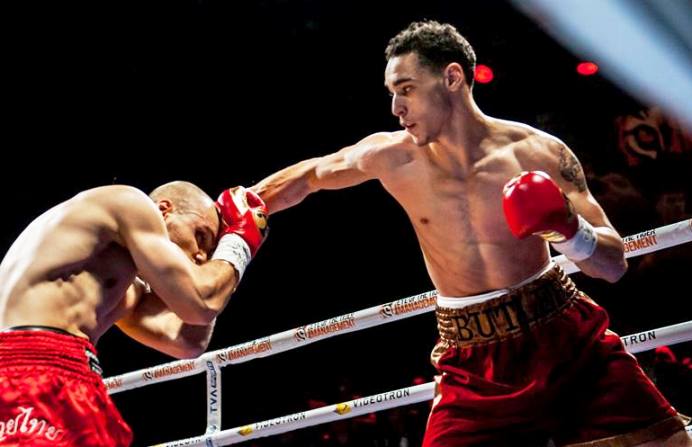 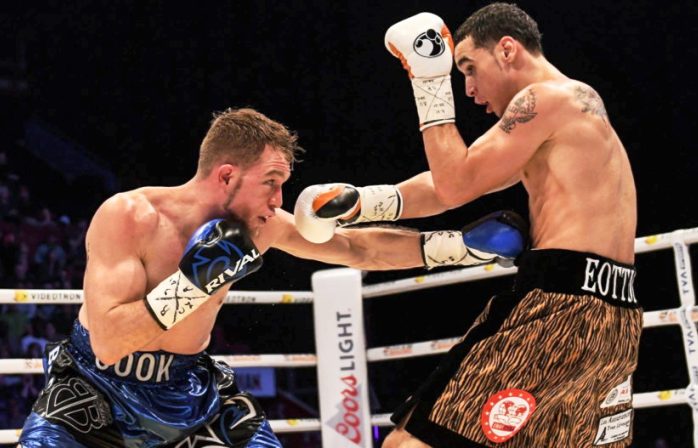 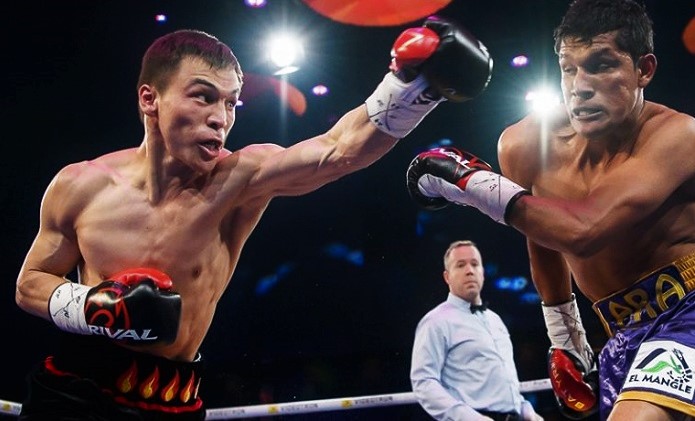