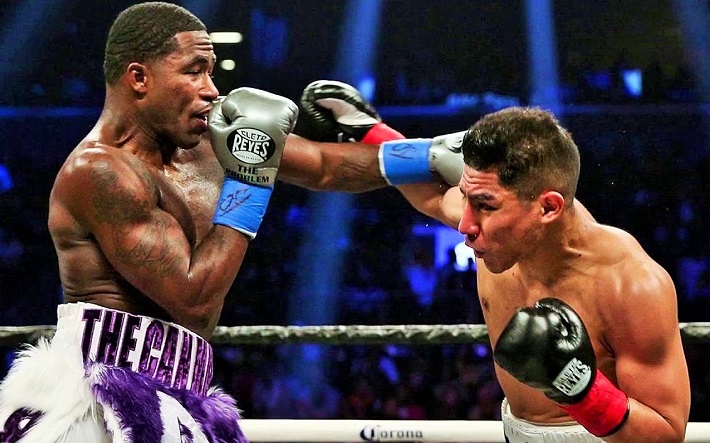 Khan vs Lo Greco
Amir Khan finally returned to the ring yesterday–following a high-profile KO loss to Canelo Alvarez, a bone-graft surgery on his right hand, and appearances on a dancing reality TV show in his native Britain–to demolish embarrassingly overmatched Canadian Phil Lo Greco in a 150-pound catchweight fight. And all you need to know about the proceedings is that reading this will take you longer than finding and watching a clip of the demolition job, the severity of which had many on social media questioning whether Lo Greco was an actual professional boxer or someone randomly picked from the packed Echo Arena in Liverpool, where the “bout” took place.

That’s why we’ll just skip right to the question of what comes next for Khan, who celebrated his victory over what’s at best a C+ opponent with all the brio of someone who just earned an Olympic gold medal. But never mind, at this point of his career Khan is all about cashing out on his name, which still carries heft, especially in the UK. Allied with promoter Eddie Hearn–who also promotes Kell Brook–Khan’s priority is to make a fight with “Special K” a reality.

The bad news for those still interested in that now over-marinated encounter is that the haggling over it, haggling which has been going on for at least a couple of years, will continue for the foreseeable future, given that Khan will be competing at 147-pounds, while Brook has already moved on to 154. So on top of money demands, ego-clashes and everything else that needs to be resolved to make a high-profile bout a reality, the weight is now a stumbling block. The truth is if these two fighters hailed from anywhere but Britain, barely anyone would give a damn about their potential fight anymore, but UK fight fans are loyal to a fault, and therefore Khan vs Brook (or will it be Brook vs Khan? Yet another thing to sort out), will do brisk business if and when it happens.

Broner vs Vargas
For years now, every time I watch a Broner fight my mind wanders back to this extract from Bill Hicks’ bit on Billy Ray Cyrus: “I know y’all love Billy Ray Cyrus. Don’t lie to me! I’m talking to the women here. Yeah, bullshit! You do. He sold 5 million albums and now all the guys here bought ’em? Fuck you!”

Broner does big ratings every time he steps between the ropes, and while few hardcore fight fans would admit in public to being fans of “The Problem,” the ratings prove we all tune into his fights, partaking as we do in some kind of collective exercise in masochism, all of us walking one more time that familiar, desolate alley which leads to nothing other than self-loathing and shame.

But last night, thanks to a fortuitous combination of matchmaking and luck, fans could, for once, enjoy watching this unabashed douchebag perform. In front of almost 14,000 paying customers at Brooklyn’s Barclays Center, Adrien Broner met former titlist Jessie Vargas in a 144-pound catchweight fight, the catchweight being due mostly to Broner’s refusal to make 140-pounds, a weight for which his frame and skills are much better suited, as well as his desire to fight drained welterweights instead of full-fledged ones.

But Jessie Vargas spoiled (sort of) Broner’s plans of a triumphant return following his pathetic performance against Mikey Garcia last summer, as Vargas came out of the gate firing a long, stiff jab which Broner had no answer for. Vargas kept the tempo up for most of the first half of the fight, dictating the terms and keeping Broner at the end of his accurate shots, with “The Problem,” as so often before, inactive for long stretches of time and showing zero ability to adapt to his opponent’s tactics. While Broner managed to land a few clean shots each round–the kind of punches that, to paraphrase Al Bernstein, were sending lightweights to the canvas–they carried nowhere near the power required to put Jessie on the defensive.

If Broner’s power can’t carry him to victory, he’s seldom able to come up with a plan B. It’s hard to win rounds on counter-punching if you refuse to let your hands go once you’ve been tagged, and this was pretty much the story for the first half of the bout. Fortunately for Broner and his fans, Vargas started fading in the middle rounds and his fatigue allowed Broner to take over the fight and walk him down in several spots down the stretch. Towards the end of the ninth round, in particular, it seemed as if Broner was a mere couple of punches away from sending Vargas packing, but the bell intervened, and both men made it to the final bell on their feet.

The official result was a draw, which seems a fair outcome given the way the bout transpired, but which will doubtlessly result in an unnecessary rematch, one that Al Haymon’s PBC and Showtime will drum up as if it was the greatest event in the history of the sport. Regardless, fans were treated to an entertaining scrap last night, and we should at least enjoy that, even if it had to be followed by yet another cringe-worthy, asinine, xenophobic diatribe from Broner in the post-fight interview, the details of which you can find on Youtube if you really care about such things.

Gervonta Davis and Jermall Charlo
Both Davis and Charlo scored impressive wins in the undercard to Broner vs Vargas, bolstering their cases as elite talents at super featherweight and middleweight, respectively. But it also has to be said that both found little resistance from their opponents, Jesus Cuellar and Hugo Centeno. Not only are we bundling Davis and Charlo together in this recap because we’re running out of space, but also because they both showed similar attributes in dispatching of their adversaries: focus and patience, yes, but more importantly, tremendous speed and fight-ending power.

Their knockout wins will keep their names buzzing for the foreseeable future, and the hope is that we see them back in the ring as soon as possible, although the PBC has the worst track record in keeping their fighters active and relevant. Davis, having lifted a belt in his win over Cuellar last night, might not be able to land a match with Vasyl Lomachenko–given that “The Matrix” is moving up to the lightweight division–but could end up fighting a unification bout against the winner of the upcoming Tevin Farmer vs Billy Dib fight. Meanwhile, with his win over Centeno, Charlo has positioned himself as the WBC mandatory to Khazak boss Gennady Golovkin. Given the still ongoing string of mamadas that has driven the middleweight narrative for years now, it’s anyone’s guess whether that intriguing matchup will ever actually take place.

Cinco de Mamadas–Encore
And speaking of the middleweight division, two major news stories surfaced this week involving the two biggest names in the division. First off, the Nevada State Athletic Commission confirmed what everyone suspected, that Canelo Alvarez will be suspended from boxing for six months, retroactive to the date of his failed tests back in February, and not even a nominal monetary penalty was imposed on him. This means that the annual Quince de Septiembre Vegas bonanza should proceed unimpeded–probably in the form of a rematch with Gennady Golovkin–and everyone can go back to pretending PEDs is not a problem in boxing anymore.

And although it’s true the NSAC will be testing Canelo to make sure he doesn’t eat any more Clenbuterol-seasoned food-truck tacos, they were courteous enough to give him advance notice of the exact dates on which he can be expected to be tested before his next bout. This sounds to us exactly like a teacher giving his student the answers to the final exam but, hey, what’s the point of expecting anything else when it comes to Canelo and the powers-that-be?

News number two is that Golovkin finally has an opponent for the Cinco de Mayo card he insisted on keeping, and that is none other than Vanes Martirosyan, a career super welterweight better known for dropping decisions to Erislandy Lara, Jermell Charlo and Demetrius Andrade. The bout will take place at Carson’s StubHub Center and will headline a card which will also see the return of Roman “Chocolatito” Gonzalez following his devastating loss to Srisaket Sor Rungvisai in their rematch of last year. Under different circumstances this would be a decent there’s-nothing-else-on-TV card, but given the fact that it’s Cinco de Mayo, and that much worthier rivals were vying to become Golovkin’s opponent–not only the aforementioned Andrade, but also Sergiy Derevyanchenko (one of his mandatories), and even super middleweight Gilberto “Zurdo” Ramirez–this feels like a huge letdown.

This is especially so coming from a fighter who became one of the biggest names in boxing by espousing the philosophy that he’d fight anyone, anywhere, anytime. That he was in it because he “respect box”, not for business. That he wanted to give fans “big drama show”, and not showcases or exhibitions. That he wanted to build a legacy that would allow him to stand shoulder-to-shoulder with the greatest middleweights of all time. Taking all this into consideration, his team’s selection of Vanes as a replacement for one of the biggest nights of the boxing calendar reeks of everything he and his team said they stood against. Further, Golovkin knows how hard it is to climb the boxing rankings based on merit alone, and so his denying that shot to an up-and-comer who already earned it, like Derevyanchenko, is yet another stab to his credibility.

That being said, most of the “soft” fights Golovkin has taken in his career have been more due to difficulty in securing worthy opponents than due to opportunism. And even though this time feels different, the Canelo debacle and the time constraint it imposed on him make it seem harsh to not give Golovkin and his team the benefit of the doubt. But the truth is Golovkin’s team made an effort at every turn to take the easiest possible fight, all with the ultimate goal of keeping the flame of the Canelo rematch alive. 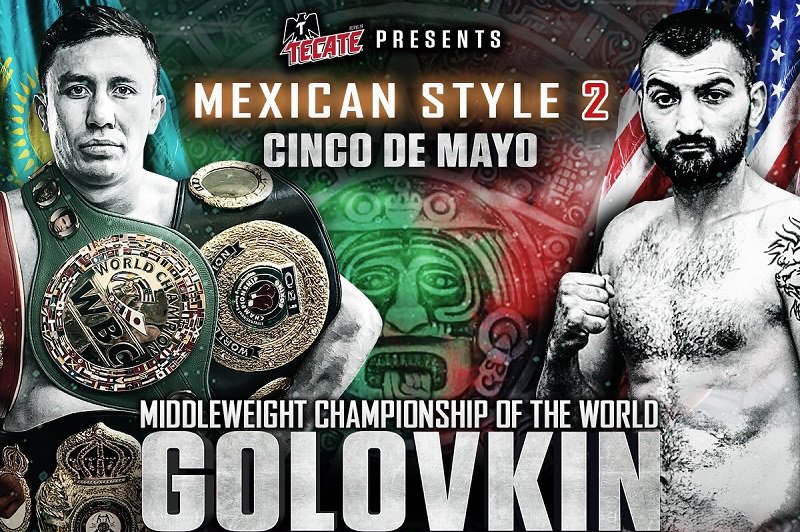 The NSAC made them move out of Nevada once their chosen opponent–one Jaime Munguia–wasn’t approved because of his lack of experience. Then they low-balled Gary “Spike” O’Sullivan–not an elite talent by any means, but at least a middleweight–who then quickly moved on. And then someone in Tom Loeffler’s office managed to pull the name of Vanes Martirosyan out of the furthest recess of their mind, blasting it all over social media after two years of exactly no one having any reason to type his name, and somehow coming up with the narrative that the guy’s a draw in California.

And yet, word on the street is that the StubHub on Cinco de Mayo will break the attendance record that Golovkin himself set when he fought Marco Antonio Rubio back in 2014, using a pricing scale that sets you back $750 for a ringside seat. Maybe we really do not know shit about boxing around here after all. What was that we were saying about boxing and masochism?            — Robert Portis 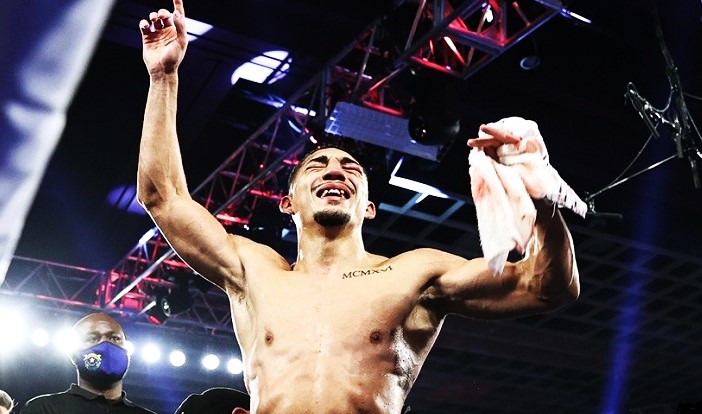 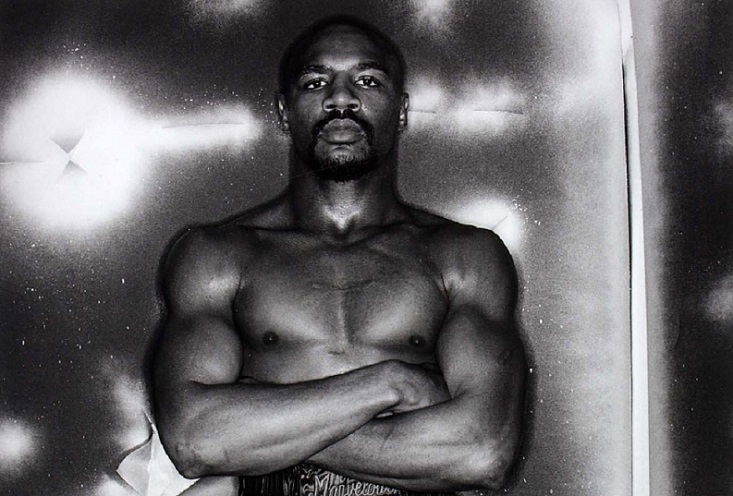 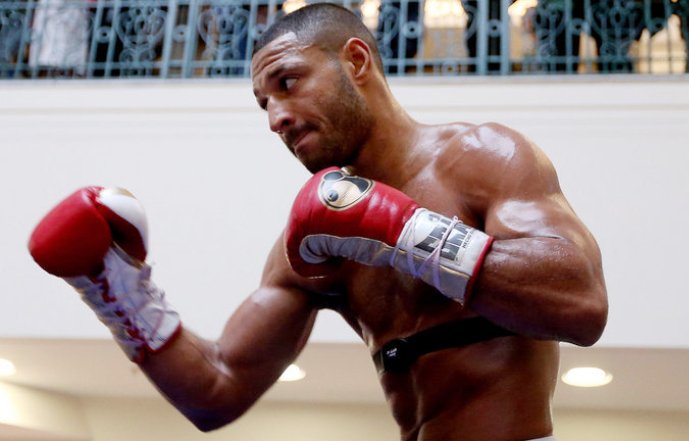