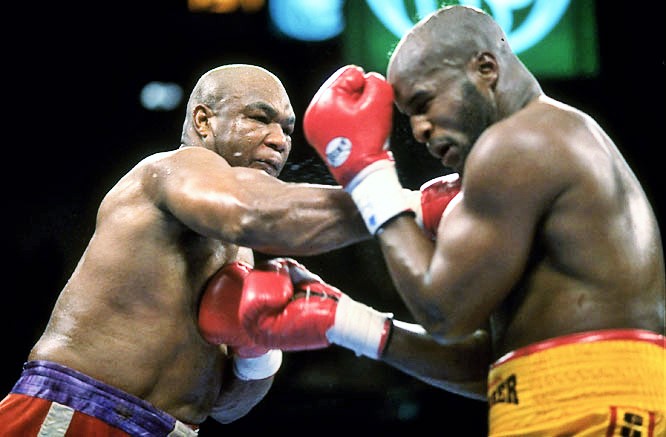 It was on this day in 1994 that the “impossible dream” was fulfilled. At age 45, former heavyweight champion George Foreman became the oldest man to win the heavyweight crown in the seventh year of a most unlikely comeback run. The fight itself has become part of boxing folklore and is marked by, among other things, the contrasts between Foreman and Michael Moorer, two men from different generations, with markedly different backgrounds and personalities. But if you look closer you will find some intriguing similarities. A young Foreman in fact shares some significant resemblances to the seemingly dark nature of the young Moorer, who will certainly go down as one of the most misunderstood of heavyweight champions.

But if there’s a misperception about these men, there’s an even more profound misunderstanding about the night they clashed for the heavyweight championship of the world, about an outcome that, in retrospect, shouldn’t be so shocking. More than a few boxing historians have noted that the 45-year-old version of Foreman was, at least in some respects, a better fighter than the 1970’s version, that in an imaginary match-up between the two, the older man would win. If we allow that to be a possible truth and look at Moorer vs Foreman from that perspective, than his great victory becomes something less than astonishing. It also allows us to acknowledge that it was something more than a one punch knockout.

Foreman was born in Marshall, Texas and raised in Houston, one of seven children, and from the age of five had no father at home. Young George soon became a product of the streets, and while far from being free of the demons which haunted him for much of his youth, finding boxing instilled a sense of discipline and his talent carried him all the way to an Olympic Gold Medal at age 19. As a professional, Foreman’s rage manifested itself into fearsome displays of punching power. When he knocked the undefeated heavyweight champion Joe Frazier down six times en route to a second round knockout, Foreman instantly became the most feared heavyweight champion since Sonny Liston a decade prior.

While “Big” George’s reign was short, it was solemn and dark, hardly engaging the press, fans, or even fellow opponents, as he mowed down the likes of Jose Roman and Ken Norton with seeming ease. Before he faced former champion Muhammad Ali in Zaire, many worried for Ali’s well-being, including novelist Budd Schulberg who predicted that “George could hurt him badly.” Broadcaster Howard Cosell stated that “the time may have come to say goodbye to Muhammad Ali,” and The New York Times predicted he would be knocked out in the first round.

Contrary to expectations, Foreman was outclassed, out-smarted, and eventually out-gunned by Ali, who watched as Zach Clayton counted Foreman out. The loss would go on to psychologically scar Foreman, who stated that it took years to live down the fact that he was no longer the heavyweight champion of the world. Three years later, when George was beaten by Jimmy Young, Foreman, only 28 years old, retired from the fight game.

At that time, a ten-year-old Michael Moorer was about a year away from taking his first steps in a boxing ring. Eventually relocating from the hard knocks of western Pennsylvania to the Kronk Gym in Detroit, the legendary trainer Emanuel Steward helped guide him to amateur boxing prominence, his prodigious talents allowing him to dominate seasoned pros. With Moorer’s immense potential, Steward and Michael decided to bypass any attempt to make the 1988 Olympic team and instead Moorer turned pro.

Amazingly, that same year Moorer won the WBO light-heavyweight title in only his 12th professional fight. After nine successful title defenses, all by knockout, he moved up to heavyweight where he won the WBO heavyweight title in a knockdown, drag-out slugfest with Bert Cooper. However, by this point, Steward had lost his grip on Moorer, claiming “Double M” lost an interest in training and he eventually parted ways with the promising heavyweight. In essence, Moorer, like a young Foreman, was developing an autonomy and an insistence to dictate his career on his own terms that made it very difficult for others to connect with him.

Moorer was not the crowd pleasing, amicable heavyweight champion that Holyfield was, nor did he have the firepower of former champion Mike Tyson. By and large, Moorer was viewed by many as something of a placeholder champion, temporarily holding the belts while the likes of Riddick Bowe, Tyson, and Lennox Lewis awaited their opportunity to seize the throne. What made things worse for Michael was he was something less than charismatic, often repelling people with his curt, angry responses. Clearly, these circumstances gave the champion something to prove in his first title defense against George Foreman. However, Moorer found himself in a lose-lose situation against an aging legend who was coming off more than a year of inactivity following a disappointing loss to Tommy Morrison. Getting the public’s respect was never an easy task for Moorer.

On the other hand, Foreman had transformed from the reclusive mystery that once defined him in the first phase of his career into the jovial minister turned celebrity fighter who everyone loved. However, whether or not fans still took Foreman’s comeback seriously at this stage was becoming increasingly questionable, especially given the unimpressive performances against lower tier heavyweights Tommy Morrison and Alex Stewart. But regardless of what the public made of his chances against the younger champion, Foreman entered the MGM Grand as the same kind of sentimental favorite that Muhammad Ali had been back in 1974. The “good guy” on fight night was “Big George”; the bad guy was Moorer. 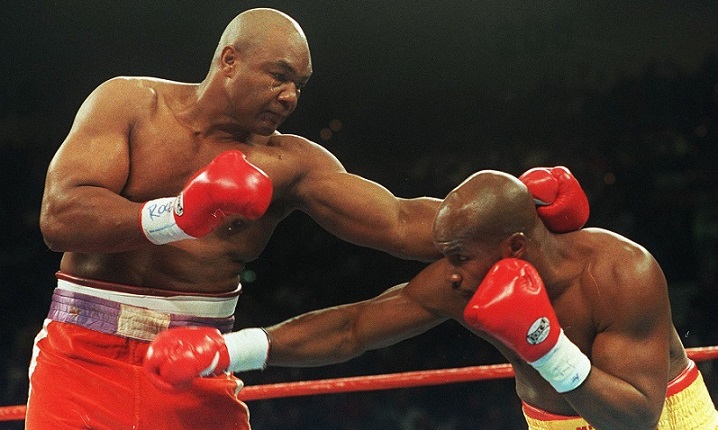 While the fight itself is often recalled as an astounding, come-from-behind one-punch knockout win, I have never viewed it that way. Despite Moorer’s best efforts to shift the narrative of the fight to how George simply “got lucky,” Foreman, now 20 years older than he was in Zaire, also appeared to be 20 years wiser, even as his physique had become a caricature of his old self. Although Moorer out-punched Foreman for much of the contest, it was George who remained the ring general, applying constant pressure, subtly keeping Moorer inside his front foot, and slowly but surely drawing him into the range of his still-potent right hand.

Perhaps Moorer’s biggest mistake was the way he underestimated Foreman’s power. In fact, many boxing experts did as well. HBO commentator Larry Merchant remarked during the fight that the “myth of George’s power” was being exposed, and fellow commentator and veteran trainer Gil Clancy spent much of his commentary casting doubt on Foreman’s viability as a legitimate threat. But despite losing round after round to the younger man, Foreman stayed focused and determined and faithful to his strategy, which was as simple as it was clever. And which banked on exploiting the natural advantages an older and wiser fighter possesses over a younger one. 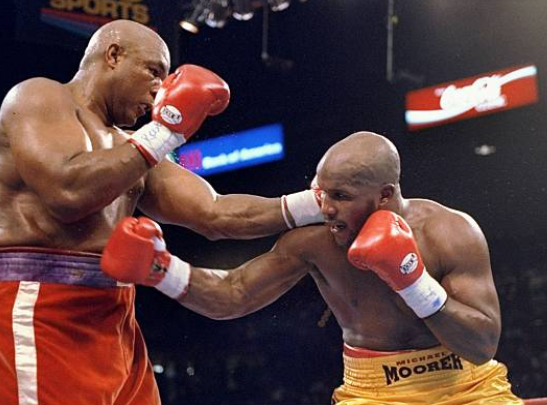 Not many realized it at the time, but Moorer was being slowly broken down by Foreman’s constant pressure. And in fact, the champion was stunned more than once prior to the knockout, most notably in rounds three and six when George managed to land some hurtful blows. And if Moorer was establishing a clearcut lead on the scorecards, he was also becoming increasingly flat-footed. In short, the young man was following the lead of the older, wiser man. Despite himself, he was acquiescing not to the counsel of Teddy Atlas but to the persistent persuasion of George Foreman. And the toll of the constant punishment and pressure was growing. Even Moorer, who afterwards was too proud to admit he was knocked out by anything but a lucky punch, eventually conceded that he was basically out on his feet before the dramatic finale.

Early in the tenth, Foreman landed a stiff right hand that appeared to stun Moorer. Foreman followed up with several more lead rights and even a wild left hook that connected cleanly. And just when it appeared as though the champion had weathered the storm, Foreman followed up with a hard right to the forehead. No one knew it at the time, but the punch stunned Moorer, froze him. 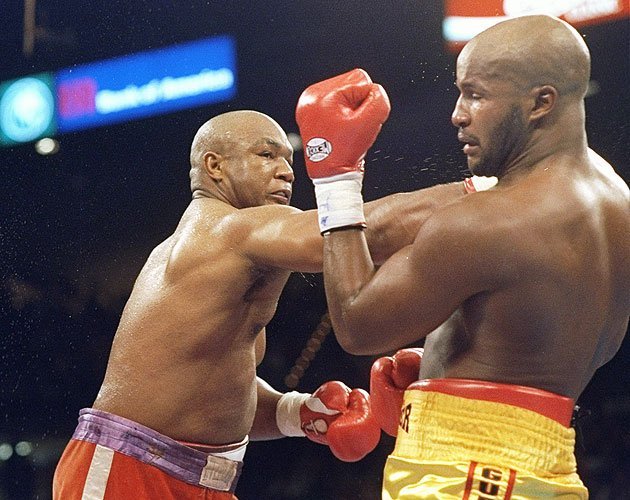 “It was just a little too high,” Foreman would later say. So George adjusted his aim and fired again and thus gave us one of the biggest shocks in pugilistic history. The shot connected cleanly to Moorer’s chin and sent him to the floor where he lay for some seconds gazing with glassy eyes at the ceiling of the MGM Grand. What no one at the time realized was how that one huge punch was in fact just the final “coup de grâce” for a younger fighter who suddenly found himself hurting and overwhelmed. Joe Cortez yelled “Ten!” and waved his arms and HBO’s Jim Lampley vocalized the emotion of the moment in one simple phrase: “It happened! It happened!”

And then a brief silence descended upon the HBO commentary staff, whose partner George Foreman had finally regained the heavyweight championship that he had lost 20 years before. Foreman, instead of exulting in celebration of his landmark accomplishment, was seen in the neutral corner kneeled in prayer as he had just beat Jersey Joe Walcott record to become the oldest heavyweight champion in history. Foreman also became the oldest man to win a world championship.

They say a fighter’s power is the last thing that leaves him, but in the case of George Foreman, it was every bit his will and his guile as it was his punching power that secured his great victory on this night. He was no longer the disturbed young heavyweight champion in Zaire who caved in under the pressure of thousands of African fans yelling “Ali Bomaye!,” or the over-anxious heavyweight vulnerable to the ring wiles of Jimmy Young. Now it was he who was the wise veteran of the ring teaching the younger fighter a painful lesson, who conned Michael Moorer into fighting his fight, breaking him down both physically and mentally en route to one of the greatest achievements in sports history.            — Alden Chodash 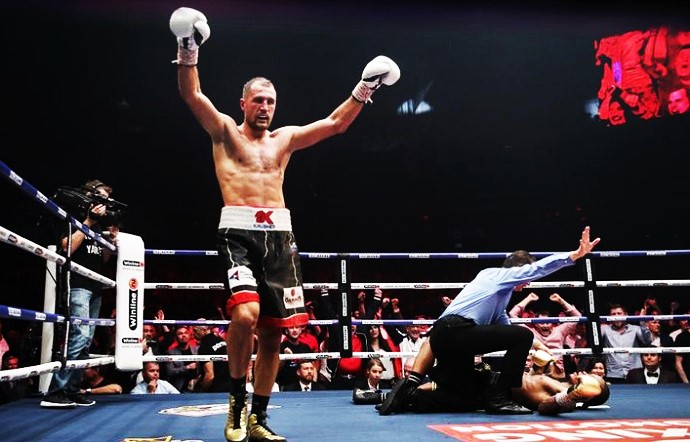 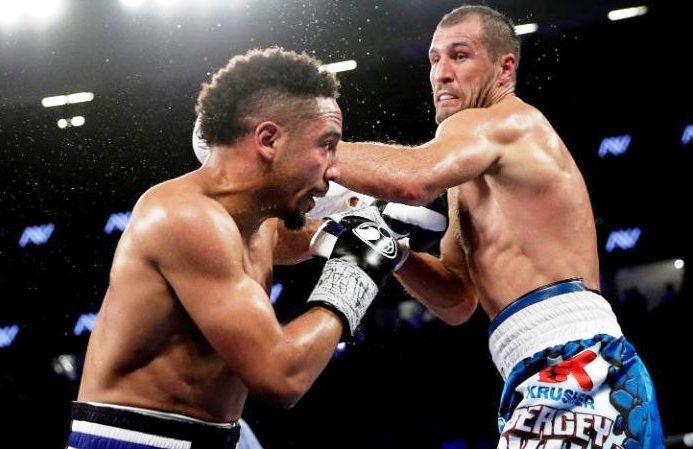 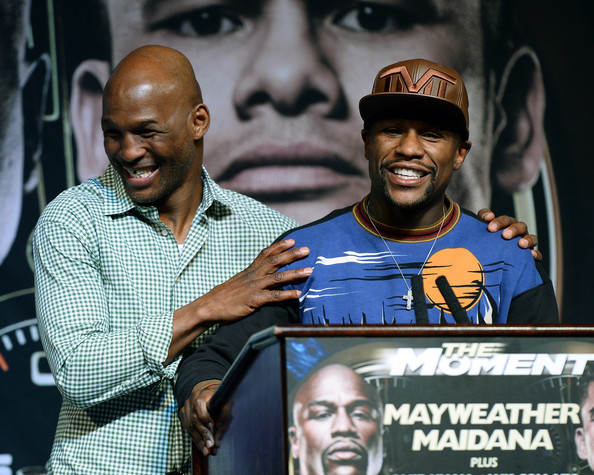 Bernard & Floyd: Who Did It Better?

3 thoughts on “More Than Just One Punch”