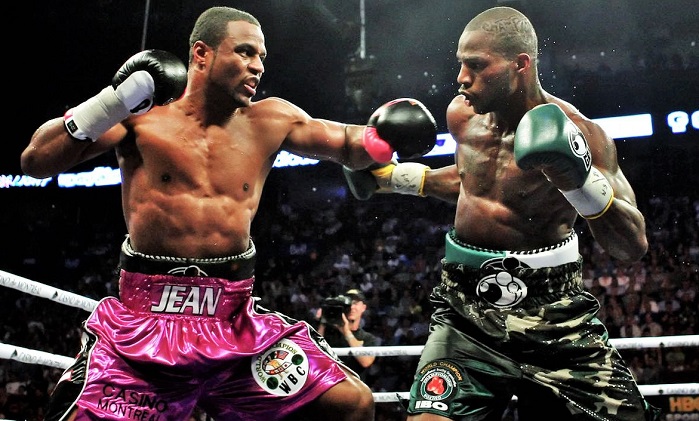 It doesn’t seem that long ago but the time has gone so fast. And so much has changed. Eleven years later, we’re still in the midst of a pandemic and combat sports in Montreal are fighting to survive. But even without COVID-19 and mandatory lock-downs and quarantines, sadly, it’s been several years since Montreal hosted a truly major fight.

How different it was a decade ago. In 2010 boxing was on fire in Montreal, the city home to at least two elite-level boxers, Lucian Bute and Jean Pascal, not to mention a long list of viable contenders and rising prospects, including Joachim Alcine, Herman Ngoudjo, David Lemieux and Adonis Stevenson. The inspiring comeback of Otis Grant was still fresh in everyone’s minds, and in addition to frequent cards at the Montreal Casino and the former Uniprix Stadium, ESPN and HBO were making trips north to cover big shows at the Bell Centre, the still new and shiny home to the Montreal Canadiens, one of the most successful franchises in sports history. At the time that same winning spirit seemed to have rubbed off on our fighters, especially with Bute’s series of championship victories and a recent high-light reel knockout of Edison Miranda.

And so, on this date back in 2010, Pascal vs Dawson was the main event in Montreal, not to mention on HBO, and the boxing world looked forward to a high-stakes match-up for supremacy at 175 pounds. There was no denying this was a legit “best vs best” showdown: Pascal had twice beaten Adrian Diaconu to secure a title belt, while Dawson boasted wins over Glen Johnson and Antonio Tarver. Local fight fans were stoked at the prospect of seeing one of their own triumph on the big stage, but, despite the fact that this keen observer happens to be a lifelong resident of Montreal, I couldn’t share in the excitement in quite the same way. Simply put, I was no fan of Jean Pascal.

From the early stages of his career, the talented Haitian-Canadian had adopted a cocky persona, reminiscent of a young Muhammad Ali or, Jean’s idol, Roy Jones Jr. His flashy ways and big mouth turned me off for the simple reason that I didn’t see how Pascal had either the technical skills or the record to justify his boasts. He had lost to Carl Froch in 2008, albeit in a very competitive fight, but otherwise had yet to face a truly elite-level opponent. And while his style of neglecting the jab in favor of winging haymakers was, up to this point at least, effective, it was far from aesthetically pleasing. Frankly, I thought he was overrated. As fight night approached, I might have been the only boxing fan in Montreal quietly rooting for “Bad” Chad Dawson to put Pascal in his place. 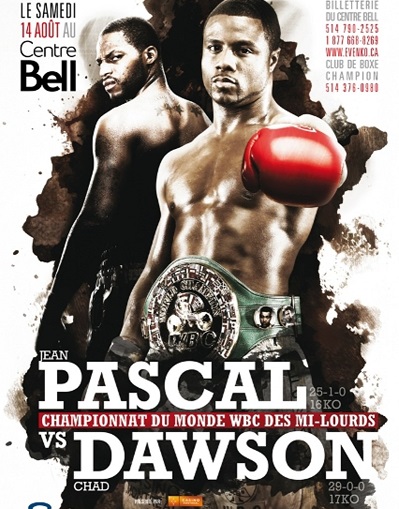 But then a most unlikely circumstance: a few days before the big match I happened to bump into Dawson in downtown Montreal, near the intersection of Saint Mathieu and Sherbrooke, an otherwise nondescript corner of apartment buildings and hotels. I was headed to the metro station when I noticed a group occupying a nearby bench. I instantly recognized Dawson and decided to approach. How could I not? How likely was it that I would ever get the chance to meet him again, face to face? I remember introducing myself and telling him I was a fan, adding how not all of Montreal was against him, that come Saturday night there would be those rooting for a “Bad” Chad victory, myself included. But instead of a few words of appreciation, I got a surly and dismissive reply and the clear message I should take myself elsewhere.

Maybe he felt uncomfortable in an unfamiliar city; maybe he was still cutting weight; maybe he and his crew were laser-focused on the task at hand and only concerned with fight-related matters. Even so, it only takes a few seconds of enthusiasm to make a fight fan’s day. And it’s not as if Dawson was getting mobbed by people. Despite his impressive record, he was recognizable in Montreal only to hard-core boxing fans. But while disappointed with his unfriendly response, I was still rooting for him because I appreciated his educated jab and solid fundamentals. And I was still eager to attend what was sure to be an exciting battle for the lineal light-heavyweight crown.

That anticipation reached its peak when Dawson made his ring walk in the Bell Centre to the strains of “Not Afraid” by Eminem, still one of my favourite songs. Hearing that motivational anthem had me convinced the American was entering the ring with the right mentality: he wasn’t intimidated and he was ready to accomplish his mission. But when the bell rang and the fight got underway in earnest, my intuition quickly proved incorrect. It was not Dawson, but an energized Pascal, who seized the initiative, his quicker hands allowing him to beat his opponent to the punch and land sharp, powerful blows. And even when Pascal’s shots didn’t connect, the crowd erupted as if they had, the noise reinforcing the electric atmosphere and the sense that the energy and momentum were with the hometown fighter.

Still, because he put everything behind every shot, Pascal could only fight in spurts, which gave Dawson all kinds of time and space to initiate and generate some momentum of his own. But the American lacked a sense of urgency and just wasn’t throwing enough punches to take advantage of those opportunities. Conversely, Pascal maintained his aggressive approach and showed he was ready and willing to do whatever it took to earn the victory. As the duel progressed, it was Pascal landing all the eye-catching shots and out-hustling his foe. Dawson had his moments in the middle rounds, but they were sporadic and he was never able to sustain a consistent attack.

Pascal stunned his opponent with hard right hands in round seven, the blows appearing to wake Dawson up and push him to exchange, but another right stunned Dawson in the eighth. And with every clean shot landed by Pascal, the crowd erupted, which spurred their hero on even more as he continued to set the pace. And as the loud chants of “Pas-cal! Pas-cal!” reverberated in the arena, I couldn’t help but switch allegiances and start rooting for my fellow Canadian. I was impressed by Pascal’s indomitable spirit and his willingness to do whatever it took to emerge victorious. He was proving that purpose and determination can offset technical flaws and, in the process, he was earning my respect and admiration. 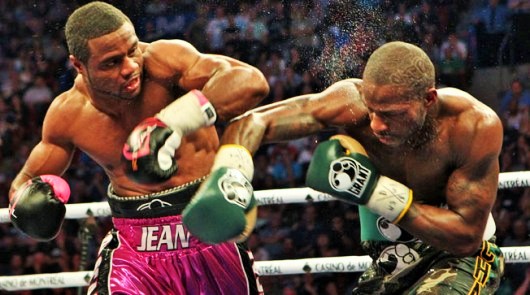 With the fight slipping away, Dawson finally showed some urgency in round eleven, unloading a series of hooks and straights that forced Pascal to backpedal, cover-up, and hold on for dear life. Halfway through the round, Dawson landed a jolting left uppercut, his best punch of the fight, the shot buckling Pascal’s legs and clearly stunning him. Sensing his opportunity, Dawson pursued in search of a finishing salvo, but his attack led to an accidental clash of heads and a deep gash above Chad’s right eye. The referee summoned the ringside doctor and, after a brief inspection, the match was halted, rescuing Pascal from further punishment. The bout went to the scorecards, and the judges were unanimous: Jean Pascal was the new undisputed light heavyweight champion of the world.

Like everyone else in the Bell Centre that night, I felt proud of Pascal for having pulled off the victory, especially since I had viewed him as a clear underdog to Dawson. And while I am not exactly the patriotic type, in that moment I also felt proud to be Canadian. With one of our own besting a top American fighter on HBO, it felt good to remind everyone south of the border that Canadians can fight too. A decade later I can vividly recall that positive energy as I drove home that night and it was Pascal who gave me that good feeling.

And he’s given me more good feelings in the ten years since, more than anyone had a right to expect. The man has been written off more times than one can count, but as recently as last year world title belts were again in Jean Pascal’s hands. Despite tough losses to Sergey Kovalev, Eleider Alvarez and Dmitry Bivol, this born warrior refused to listen to the doubters and put himself back at the top after scoring a massive upset over undefeated Marcus Browne.

In fact, that match was uncannily similar to Pascal vs Dawson as it featured another gutsy performance from the veteran before a clash of heads opened a severe cut on the younger man. The bout was stopped and the scorecards gave Pascal a most unlikely points win. But then even more good feelings came our way when Pascal gave us a Fight of the Year contender against Badou Jack and, after twelve grueling rounds, the judges again rewarded the Canadian’s tenacity and heart.

And it’s that same kind of courage that’s going to be required from all of us to overcome this pandemic and bring boxing back to The Fight City the way it was in 2010, but make no mistake, it can be done. Montreal fight fans, after all, have a proven track record of showing up in droves to support one of their own, and we still have more than our share of top talents and blue-chip prospects honing their craft here, including Kim Clavel, Steven Butler, Yves Ulysse Jr., Marie-Eve Dicaire, Arslanbek Makhmudov, Saddridin Akhmedov, and Lexson Mathieu. Jean Pascal came all the way back; so will Montreal.          — Jamie Rebner 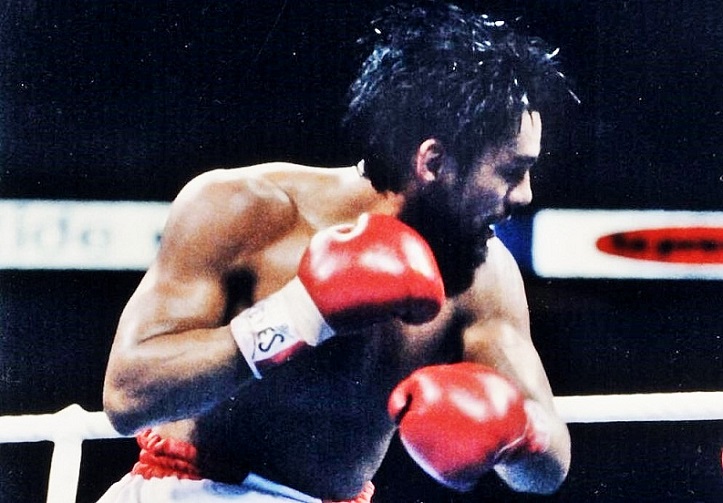 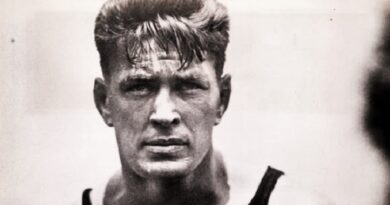