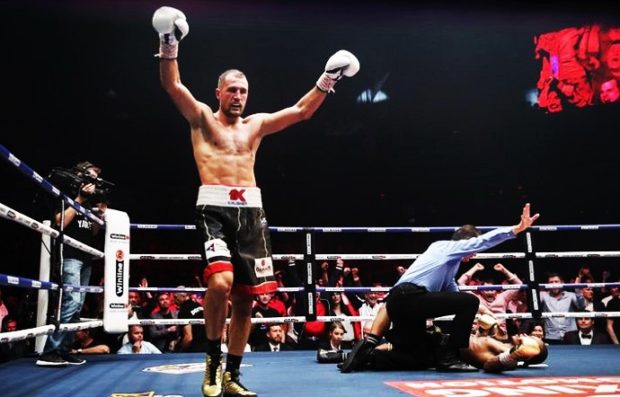 Kovalev vs Yarde. A veteran champion defending in his home nation of Russia against an undefeated British upstart. An intriguing match-up on paper and one that brought out the full spectrum of predictions. Some asserted Yarde, at 18-0 but with precious few recognizable names on his record, had no business taking on Kovalev and would be badly exposed. Others, swayed by a mixture of Yarde’s obvious athleticism, his team’s confidence, and the chinks apparent in the Russian’s armour, insisted the Englishman was about to pull off one of the great British upsets on away soil. 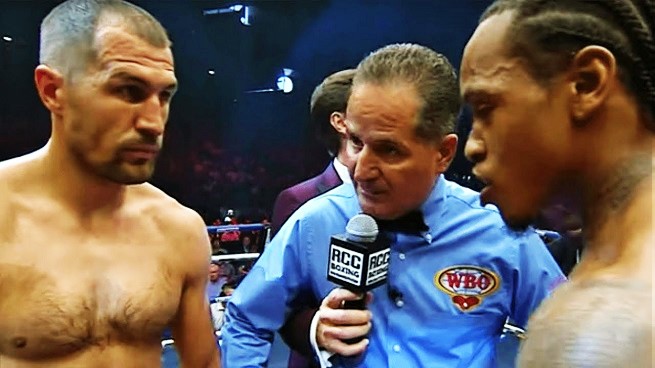 Before the opening bell: both fighters had their backers.

With punters confidently banking on either extreme – the championship pedigree of the Russian vs the unknown limits of Yarde’s potential – a chorus of smug “I-told-you-so’s” appeared likely to follow, regardless of the outcome. But in the end, those who had boldly placed their faith in Yarde, and those who banked against him, were both vindicated. Kovalev’s superior skills and ring savvy proved decisive, but anyone who bet big on “Krusher” and doesn’t admit their heart-rate went through the roof before all was said and done is being less than honest.

The action started with both jockeying for position in ring center. Yarde stood in his distinctive “Mayweather-esque” stance, left hand dangling low, and sought to counter with fast left hooks. Kovalev was simply more effective with his higher guard and busier, accurate jabs, though Yarde did get through with a right hand to the body towards the end of the first, indicating a possible avenue to victory. 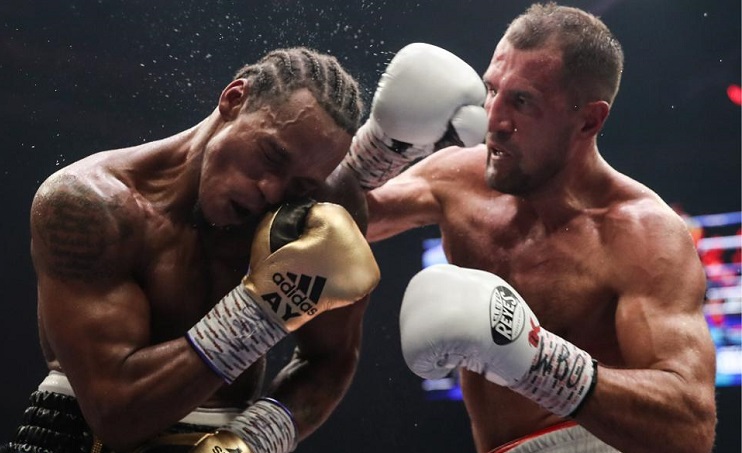 In the second, as Yarde mostly missed the target with counter hooks and neglected his right, Kovalev continued to edge forward and land the jab. “Get your rhythm,” urged Buddy McGirt, Kovalev’s trainer, between rounds. “Don’t force the right hand.”

The action heated up a notch in the third and fourth. Yarde came with a bit more intent and began letting the right hand go now and again. The challenger was keeping things competitive, and despite never pulling ahead, he displayed glimpses of the raw talent that had led many to predict an upset. In the fourth Kovalev also began to let his right hand go more, unleashing some impressive two-fisted salvos, and while he hadn’t established a truly dominant position to this point, the champion’s accuracy and work rate were scoring in every round.

Between the fourth and fifth McGirt again advised Kovalev to focus on his most effective weapon, the jab, cleverly reminding him to make full use of the target area, aiming for arms, shoulders, the chest, whatever was available. “Hit him anywhere [with the jab],” said McGirt. “Don’t worry about the head.” 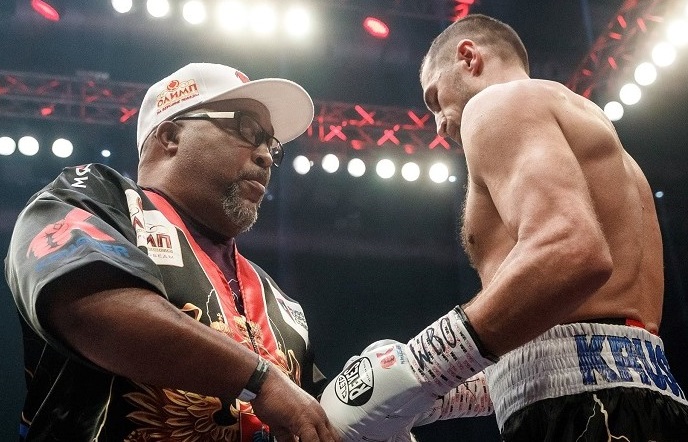 Yarde finally began to make more use of his own right early in the fifth, landing a couple of decent shots and pressing the action, and the first tell-tale signs of fatigue appeared as both widened their mouths to suck up extra oxygen. A determined Yarde found limited success towards the end, throwing out some snappy body shots and right hands, but Kovalev, taking McGirt’s astute advice, had worked the left up and down beautifully to control the majority of the round. In the sixth the champion really started to find his groove, timing more and more shots and dictating the range as the challenger’s movements became more lethargic. Yarde just couldn’t do anything to get out of the way of Kovalev’s jab and ended the session six to zip on my card.

Desperately needing to re-assert himself, the Englishman started positively in the seventh, landing a good counter left. In his best round thus far, the Brit pushed forward, still catching some on the way, but busier with the right hand and finding a home for some strong, eye-catching hooks to the body. For the first time in the fight Kovalev exhibited subtle signs of distress and looked the more tired of the two. 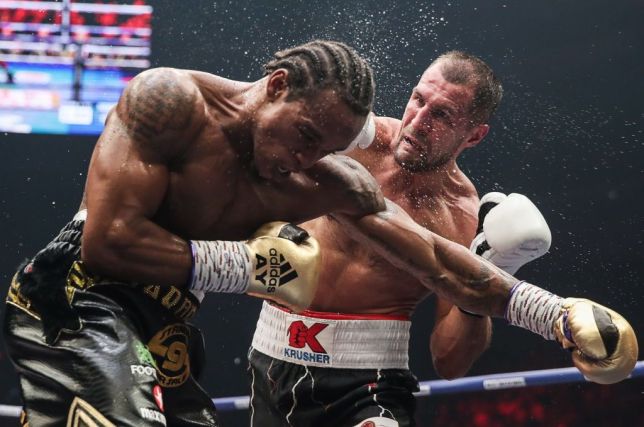 Then came a wild, pivotal eighth round. Just under a minute in, Yarde landed a thudding left hook to the body that got the champ’s attention. Pushing Kovalev back, the challenger suddenly found some pep in his step, rolling and ripping home left hooks and right hands. Two minutes in and Yarde cracked home a big right, and Kovalev was hurt. Yarde sensed his moment and unloaded a volley of left and right hooks as the champion swayed and rocked around the ring, surviving rather than fighting back.

With twenty seconds left, Yarde threw a huge left hook, missed, and almost tumbled over the top rope under the weight of his own momentum, a clear indication of just how much energy he’d expended. Seconds later the bell rang to end the round and it must have sounded like a Hallelujah chorus to Kovalev’s ears. In the corner McGirt left no room for doubt about the seriousness of the crisis unfolding. “If you take more shots like that this round,” he shouted, “I’m stopping it!” 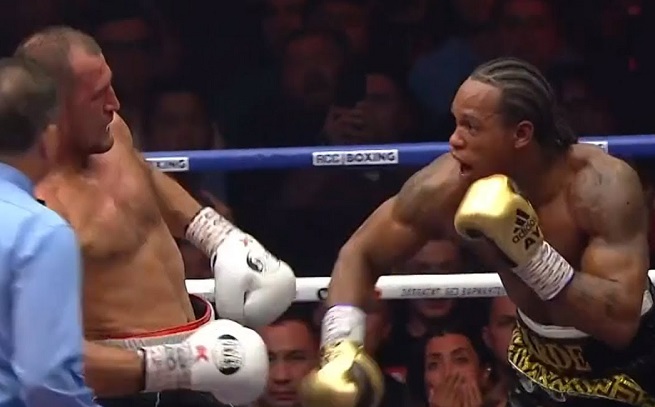 Sergey on his heels in round eight.

Kovalev had faced this kind of adversity before against Andre Ward and Eleider Alvarez, but on both occasions, had failed to regroup and lost via stoppage. But Yarde had never been beyond seven rounds, and every other opponent he’d had in such dire straits had been quickly finished off. Here was the single most critical moment for both men. Experience coupled with guidance from the corner was vital, but the contrast was stark.

“The ninth round I said ‘just go out there and empty the tank,'” said Yarde’s trainer, Tunde Ajayi. “It wasn’t a thing where you start thinking of a game plan midway through the fight. You revise for the exam, you take the exam, and then it is what it is.”

Tiring and maybe a bit drunk on his own success, Yarde seemed to forget he still had a live world-class boxer in front of him. He neglected the body work that had been so effective in the eighth and followed Kovalev around the ring, looking for a jackpot punch instead of probing for openings and luring Kovalev into traps.

Meanwhile, Kovalev appeared to have learned crucial survival lessons from the Ward and Alvarez fights and once again benefited hugely from McGirt’s guidance. Staying on the outside as instructed and boxing from a distance, soon Kovalev couldn’t miss with the jab, tattooing Yarde with fast combos and boxing masterfully to regain the ascendancy. Yarde’s big chance had passed him by.

In the tenth, you could almost see Yarde’s legs growing more leaden by the second. Still haplessly following Kovalev about, there was no finesse or flair anymore and the veteran, while clearly fighting the effects of exhaustion, stuck to the tactics he needed to win the fight. This time it was Yarde, running on fumes, who was saved by the bell as a resurgent “Krusher” snapped his head back over and over again.

A solid argument can be made that Yarde should have been pulled out at this juncture. He was clearly exhausted and shipping punishment and hopelessly behind on points, but then again, in fairness to his corner, having had Kovalev so badly hurt and on the brink of defeat, it was not in the realm of the impossible that another big shot could turn the tide again. But it was not to be. 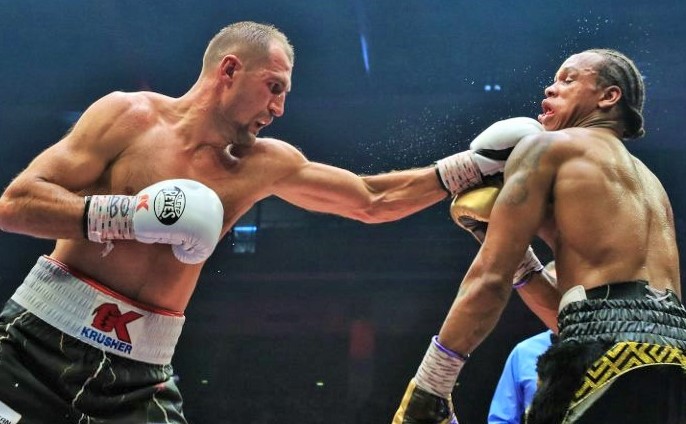 As the fighters mauled on the inside in the eleventh, Kovalev pushed and Yarde fell over, heavily. He rose, eyes swollen and lungs burning, but he was completely drained and Kovalev was finding him with virtually everything he threw. Bouncing up and down in attempt to summon some life back to his weary legs, Yarde went to throw a wide left hook, but it was too slow and he was easily beaten to the punch. Fittingly then, it was Kovalev’s left jab, the key punch of the match, that crashed into Yarde’s jaw and sent him onto his back, as much from sheer exhaustion as the weight of the shot itself. Referee Luis Pabon began to issue a count, but the challenger was completely spent. Kovalev walked away and raised his arms in a mixture of celebration and relief.

This has to be an especially satisfying victory for Sergey Kovalev.  Given his history and how close he came to defeat in round eight, it’s undeniable that he doesn’t take punishment nearly as well as he dishes it out. That said, this performance dispelled the notion that he lacks heart. On this night, both men showed real mettle, but the Krusher’s combination of will to win, educated aggression, and ring generalship came out on top. 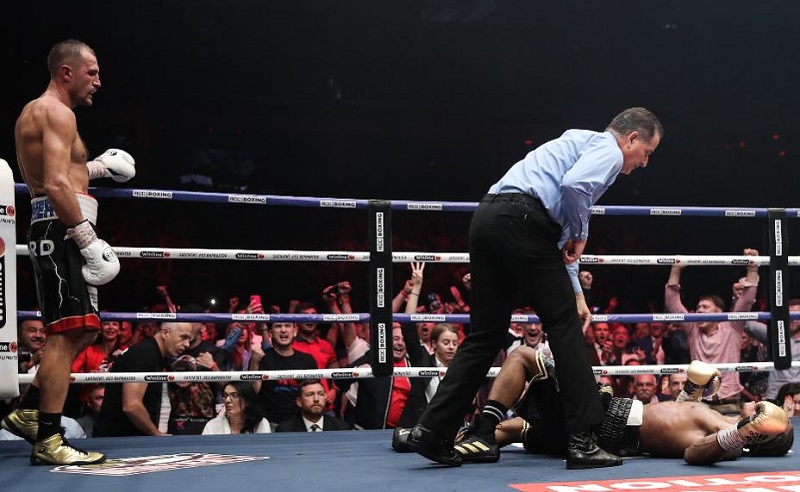 Yarde down and out, but his reputation was only enhanced.

“Experience played a big part,” admitted Yarde. “I feel like he paced himself a lot better.” A gracious Kovalev then interjected and congratulated the challenger on a great performance.

In the end, both boxers received some much-needed vindication. Kovalev demonstrated the kind of character in the heat of battle he’d previously lacked when the going got tough, while Yarde was competitive against a legit world champion and showed he’s capable of much more than fancy pad work. Bottom line: the argument can be made that the Kovalev vs Yarde showdown was each man’s most impressive feat to date, as both exited the ring with their reputations enhanced. Give it some time and maybe, just maybe, Kovalev vs Yarde II will be a major attraction in 2020. My guess is fight fans who tuned in on Saturday would welcome that development.           — Matt O’Brien