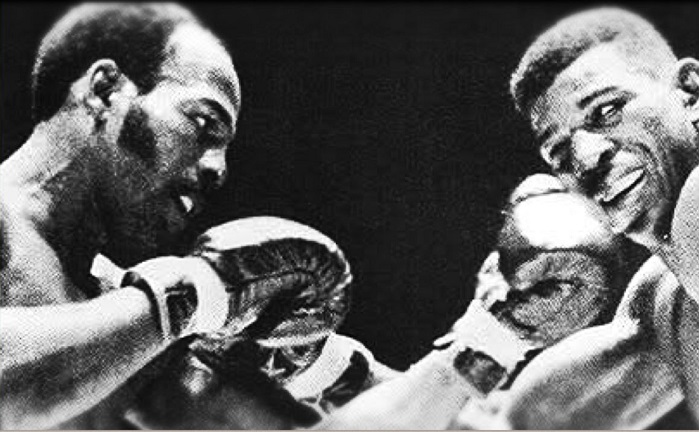 Their first meeting, in July of 1977, was a thrilling war, called one of the most sensational fights in the history of the Philadelphia Spectrum. As any knowledgeable boxing fan knows, there is no higher praise than that. After eleven rounds of furious action, an exhausted Marvin Johnson collapsed after absorbing a prolonged battering in round twelve and Matthew Franklin was the new owner of the North American Boxing Federation light heavyweight championship.

Johnson wasted no time returning to the ring, going 6-1 before taking a world title belt from Mate Parlov in 1978, while Franklin scored big wins over Richie Kates and Yaqui Lopez. The stage was set: a Johnson vs Franklin rematch for the world title, held in Johnson’s home city of Indianapolis and broadcast on live national television. But could the second meeting live up to the amazing action of the first?

In short, yes, it could. And it did. In fact, one suspects Marvin Johnson and Matthew Franklin (who would later change his name to Matthew Saad Muhammad) could have been matched up any number of times and the result would have been the same: a grueling, crowd-pleasing, non-stop slugfest, both warriors more than happy to trade big shots at close quarters.

At the opening bell, the southpaw champion chased after Franklin, looking to impose his will and put the challenger on the defensive as he unloaded big left hands and uppercuts on the inside. For his part, Franklin, known for being a slow starter, took his time and waited for openings to throw his powerful right. In round two Johnson shook Franklin with a big left cross and the hometown crowd roared, but a minute later a powerful uppercut buckled the champion’s legs, before Johnson landed a series of heavy lefts. And so it went: toe-to-toe slugging between two game and powerful warriors.

The action only intensified in round three, neither man willing to back down, both happy to hold their ground and trade and see who could withstand the greater punishment. Johnson worked to find the proper distance for his dangerous left uppercut and mid-way through the round he hit pay dirt, stunning Franklin with the best punch of the match thus far. More uppercuts and big left hands followed and despite a last second rally from the Franklin, round three clearly belonged to the champion.

The irrepressible Johnson got his right hook going to both body and head in the fourth, and while there was still a long way to go in this fifteen round battle, increasingly it appeared that Johnson simply had Franklin’s number. Quicker, more aggressive and more accurate, the champion was having things his way and punishing Franklin with a steady barrage of heavy blows. Johnson looked sharp and was fighting with confidence, while the man from Philadelphia appeared listless and easy to hit.

But Franklin came alive in the fifth behind his left hook and a determined, two-fisted body attack. Johnson suddenly couldn’t find the range for his uppercut as the challenger, for the first time, forced Marvin to give ground. This led to a change in tactics for the champion, using his southpaw jab to keep Franklin at a distance, but if that nullified Franklin’s body attack, it also created openings for Matthew’s most dangerous weapon: the right hand. A minute into round six he nailed Johnson with it and followed up with two big right uppercuts and suddenly the tables were officially turned: now it was the champion who was wilting as the challenger took command with left hooks to the body and right hands to the head.

Johnson tried to reassert himself in round seven by being the busier fighter, picking up the pace and snapping home his right jab with the left behind it. But it was all for naught as just seconds before round’s end Franklin struck with a vicious right hand to the chin that took all the fight out of the champion and almost put him down. The challenger unloaded with both hands, but the bell saved Johnson from certain doom, his cornermen grabbing him before administering smelling salts and dousing him with water as he almost fell off his stool in his corner.

To start round eight Franklin showed more snap in his jab than he had in any of the previous rounds as he looked to set up the big right hand again, but amazingly it was Johnson who struck instead with his overhand left: once, twice, three times, the crowd cheering him on as he knocked Matthew back on his heels. What followed was an amazingly intense toe-to-toe exchange as Franklin, his face covered in blood, unloaded everything he had, while Johnson kept throwing the big left, but the challenger was just too strong, too powerful, too determined. A series of heavy blows drove the champion to the canvas. He beat the count but the referee took a hard look at the incredibly brave but wounded warrior in front of him and waved his arms. The ferocious battle was over.

Matthew Franklin was the new WBC light heavyweight champion of the world. He would soon change his name to Matthew Saad Muhammad, and in the span of a few short years leave an indelible mark on the brutal sport of pugilism. His thrilling clashes with Johnson, Yaqui Lopez, John Conteh, Dwight Braxton, among others, would cement his legacy as one of the bravest and most exciting champions in boxing history. But his inspiring triumphs in his two violent wars with Marvin Johnson will always be among his greatest performances.           — Neil Crane