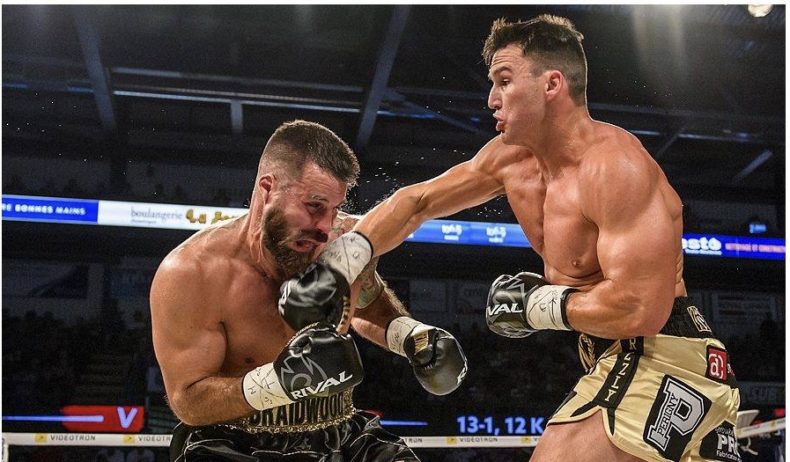 Camille Estephan and Eye of the Tiger Management pulled out all the stops in promoting Simon “The Grizzly” Kean vs Adam “The Boogeyman” Braidwood, a rare all-Canadian heavyweight showdown of genuine consequence. With a pre-fight tailgate party at the Centre Gervais Auto, home of Shawinigan’s beloved QMJHL franchise, the country’s leading promotional outfit harnessed something delightfully Quebecois: a blend of the familial, debaucherous, carnivalesque, and patriotic.

The festivities began at 5:00 p.m. adjacent to the arena and included a charismatic local band playing the kind of shit-kicker rock music Quebecers adore (and know every English lyric to), a boxing exhibition, multiple beer tents, and larger than life-sized cutouts of the evening’s principal combatants. The raucous atmosphere and pre-fight event — a must for bouts in niche locations going forward — served as the perfect prelude to what turned out to be a surreal evening.

It’s no great insight that money and marketability rule boxing, and the contrast between that and the even more substantive talent on the undercard made this gala a unique study in contrast that affirmed one thing: Eye of the Tiger is developing boxers via a multifaceted approach, tapping into a seemingly endless well of Eastern European talent, as well as charismatic local fighters. And it’s clear that both avenues of the business feed each other.

Simon Kean vs Adam Braidwood, the main event that had been brewing for the better part of a year thanks to Braidwood’s tireless and often hilarious social media campaign against the more heralded Quebecer, lived up to expectations — for the most part. The fight was violent and viscerally satisfying for Kean (15-0, 14 KOs) and his rabid supporters. It ended with a third-round TKO for the former Canadian Olympian, who proved that he’s indeed an intriguing heavyweight with the potential to be more.

By the time the main event started, the dangerously drunk crowd (even by live boxing standards) in Shawinigan seemed to collectively conjure the violence that was to come. And my goodness, was it violent. When Kean started unloading on Braidwood (13-2, 12 KOs) in round two after a tense and tight opening stanza, the roughly five thousand fans fans in attendance rose in unison, shouting for the British Columbian’s demise. There was ample taunting of the brave but outgunned Braidwood and a “too real” desire to see Kean bludgeon him.

So what did Kean vs Braidwood teach us? First, the challenger: Adam Braidwood is an improving boxer. The former football star is a natural athlete, and he can eat a punch. He’s made tremendous strides since Quebecers were first introduced to him during a bloody, sloppy, and wildly entertaining win over Eric Martel Bahoeli. Braidwood now possesses a stiff jab, which he employed effectively against Kean in round one, and the man can bang. However, once Kean, a superior technician, started to tag him with straight right hands and his own power jab, Braidwood began to unravel, relying on his toughness and instinct as opposed to the more controlled approach he started with (easy to say from ringside, mind you).

Although he’s 34, this feels like the start of something for Braidwood. He’s motivated and has some natural ability. He has charisma you can’t teach. He also seems to be the kind of fighter who sees the value of truly testing oneself, even if that results in a brutal defeat. For now, Braidwood should focus on re-establishing himself as a top domestic heavyweight through activity. And don’t be surprised if several consecutive wins leads to “Grizzly” vs “Boogeyman” II after Kean gets the comeuppance that may await him at world level.

As for Kean, he did what he was supposed to do. It’s easy to get carried away after his comprehensive dominance of Braidwood and the way a clubbing right hand had the British Columbian skating about the ring before he draped himself over the ropes in the most dramatic, theatrical, and climactic KO scene this writer has ever witnessed live. Sure, Kean was sharp with his jab, pinpoint with his straight right, and dialed in for a career-best performance, but that was the bare minimum he had to show. This was a fight where the swashbuckling Braidwood had everything to gain and Kean had everything to lose.

But there’s plenty to admire in Kean’s performance. He managed distance expertly behind a stiff jab, and he refused to be drawn into a street fight. Kean made the most of his superior amateur pedigree, landing sharper, straighter punches and staying disciplined to avoid Braidwood’s hammer fists. He was also surgical, cutting Braidwood with a laser right hand that ended up signalling the beginning of the end. A cracking left hook was the punch that buckled Braidwood, and Kean’s follow-up barrage was clinical. A+ work, truly, especially when you consider that Kean could have succumbed to an emotional desire to punish Braidwood for his antagonism and trolling.

Kean cannot be ignored as a heavyweight prospect, but now it’s time to try to establish him as a contender. No more opponents with welterweight heights and heavyweight guts. (Braidwood, built like a brick shithouse, definitely does not belong in that category.) Braidwood was a logical step in Kean’s development and marketability, but it’s time to try to add even more meaningful scalps to his ledger; Eye of the Tiger should be eyeing “washed” name heavyweights with recognizable losses on their record — the types of guys that can serve as modest measuring sticks for Kean.

What’s more likely to happen is that we’ll see Kean milk his popularity in Quebec for a bit longer. He’s an attraction, and he can indeed fight. That’s a valuable commodity in a heavyweight, especially a Francophone. By 2019, though, there will be a reckoning for Kean. If he’s fighting Braidwood again in that span, it’ll be because things haven’t quite gone as scripted. For now, though, let’s rally behind Kean. Why not, right? Quebec is not known for producing viable heavyweights, and since we have one in our midst, we should enjoy the beer-soaked ride for as long as it lasts.

The co-featured bout of the evening was far more important for Eye of the Tiger’s short-term plans, and in it, Yves Ulysse Jr. held serve with a steady, workmanlike decision over the supremely awkward and gangly Ernesto Espana. It was Ulysse’s second win in a row since his controversial loss to Steve Claggett, and while it wasn’t at all reminiscent of his masterclass against Cletus Seldin on HBO, it was important in its own way.

Ulysse (16-1, 9 KOs) was at a serious height disadvantage, but the only real consequence of that was that the flashy Canadian probably wasn’t able to punch as fluidly or voluminously as fans expected. Still, there was plenty to like about Ulysse’s win, such as his methodical discipline as he kept his hands high and guard tight, saving one burst of low-handed showboating for the final 20 seconds of the match. Otherwise, from ringside, it was difficult to say whether Espana (25-1-1, 20 KOs) landed a single flush power punch, despite throwing plenty.

A thought on the opponent: It’s easy in the aftermath of this fight to ask what in the hell Eye of the Tiger was thinking with this opponent selection. Espana towered over Ulysse, switched stances, and was busy. However, Espana’s supreme awkwardness had a substantive benefit for Ulysse: it forced him to deal with multiple looks in a single bout against an opponent who clearly came to win. Ulysse showed versatility by banging Espana’s body and working the inside, and he rocked the Venezuelan on multiple occasions.

The fight, though, was not sensational, and that’s where the small downside comes in. How might interested executives at HBO view this performance with major fight dates looming? Ulysse is world level and belongs on marquee TV broadcasts, but his Shawinigan foray was a nuts and bolts-type preparation, not a “roll out the red carpet” grand entrance to bigger things. Here’s hoping this, combined with the Seldin fight, work collectively to get Ulysse what he deserves.

The undercard was largely a developmental showcase for some of Eye of the Tiger’s brightest talents. Sadriddin Akhmedov (3-0, 3 KOs) is, simply put, special, and one also gets the sense that he knows it, which might be the only knock against him at this point in his career. Nurzat Sabirov (7-0, 6 KOs) is a versatile counter-puncher who exudes the wisdom of a veteran fighter. And Artur Ziyatdinov (6-0, 5 KOs), a crowd pleasing, talented cruiserweight, has a unique understanding of how to embrace and participate in Quebecois culture that all foreign fighters entering our market should observe. All three won their fights and are progressing nicely.

The lighter weights also got some love, with Andranik Grigoryan (7-0, 1 KO) boxing his way to an easy unanimous decision win with his exceptional balance and combination punching on full display. The only concern with Grigoryan is whether he can overcome an apparent lack of power as he steps up in class. The card also featured another all-Canadian showdown with Francois Pratte Bernard (7-0) winning a ho-hum decision over Albertan Eric Taylor (8-2-2, 4 KOs). Both can grow from this fight, but the most encouraging part of it was seeing two early-career Canadians fighting each other. We need more of this.

A parting thought on how Kean-Braidwood ended: It was damn confusing. Ultimately, the call to stop the fight was the correct one, as Braidwood was out on his feet. However, Braidwood getting draped over the ropes wasn’t clearly ruled a knockdown, and referee Mike Griffin (Canada’s best, it should be noted) was actually trying to break up the fighters when Kean landed his final blow, and he was far away from Braidwood when the British Columbian was teetering on the ropes. As Braidwood righted himself, a stool came into the ring, and Griffin only seemed to wave off the fight after Braidwood had sat down. Frankly, it was a chaotic mess.

Lastly, it’s worth reiterating how this Shawinigan card was uniquely Quebecois. To fully understand that, you simply need to experience it for yourself. Part of that was terrifying, especially the parking lot atmosphere after the fights, where shooting someone the wrong look seemed like it could start an all-out brawl, but it was also thrilling. That was made clear by seeing the event through my partner’s eyes. She’s a native New Yorker, and a confirmed Ulysse Nation member after he humiliated her Long Island compatriot Cletus Seldin. Her enthusiasm and excitement — along with the inroads Adam Braidwood has made in La Belle Province — was a small snapshot of how the boxing scene in Quebec needs to continue to embrace influences and talent from abroad. So far, so good. 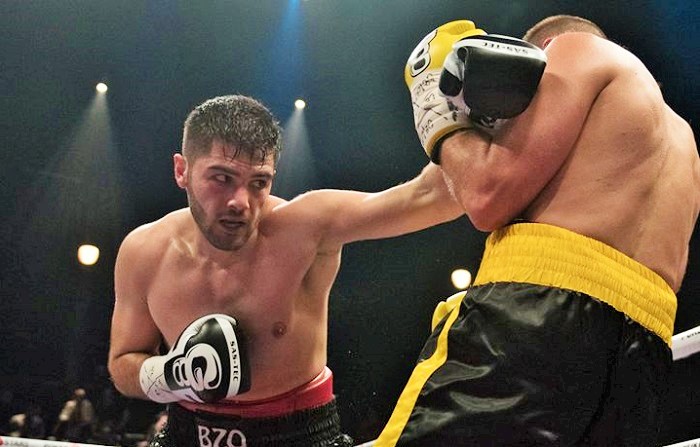 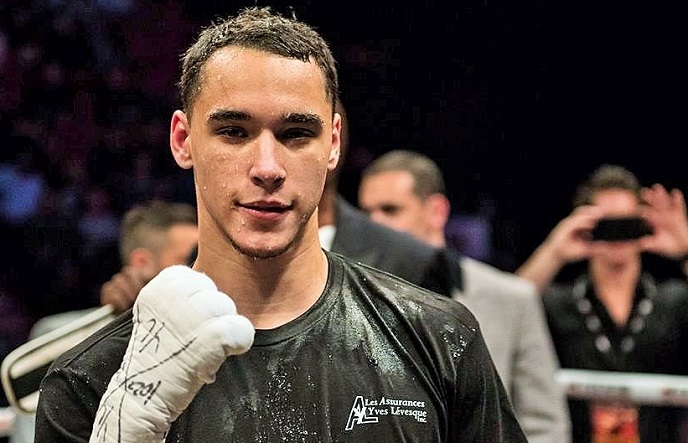 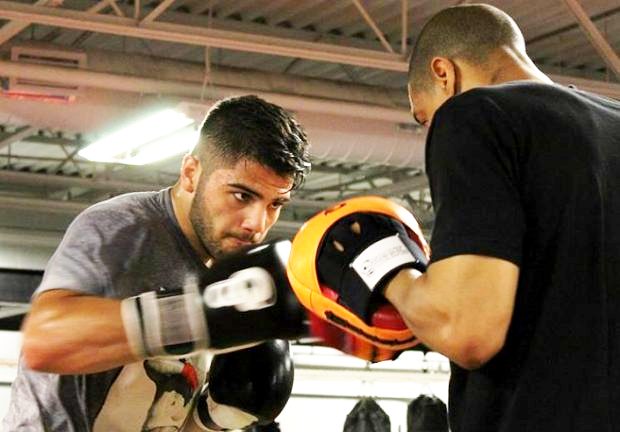