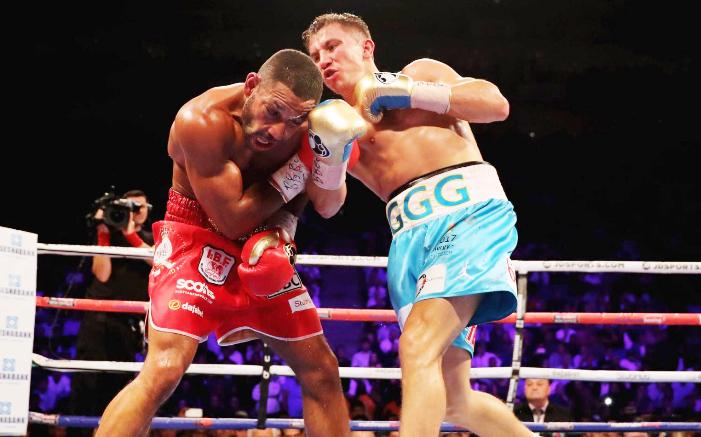 Reporting on a Gennady Golovkin fight mostly requires writing about why that fight came to be, with lots of speculation–most of it pointless–about what could possibly come next. This is because the fight itself is usually a perfunctory execution, performed with disturbing efficacy by a merciless, blood-thirsty creature that should at all times be chained to the wall and far away from anything with a pulse—whenever he’s not required to perform his duties inside a boxing ring, of course.

The match between Golovkin and career welterweight Kell Brook, fought at the full middleweight limit, played in almost the same manner as other recent GGG “fights,” this despite the considerable efforts from promoters and TV networks in trying to paint the meeting as anything other than the mismatch it appeared to be from the moment it was signed. Despite all the hype pumped into the promotional balloon, Hagler vs Leonard we did not get, this despite Golovkin vs Brook being the second match this year for which a boxing promoter made such a comparison. Then again, the moment you buy into the words of a boxing promoter is the right moment to start questioning your lucidity. 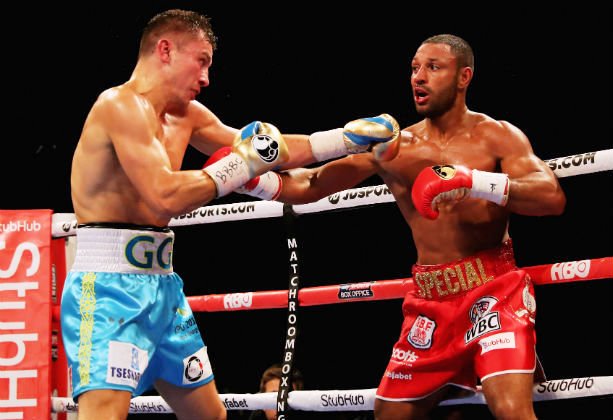 And yet, the atmosphere at London’s O2 Arena, conjured by a rabid sell-out crowd of around 20,000, clearly proves marketing muscle and nationalism are an infallible combination for selling boxing in the UK. This is one of the two reasons Golovkin accepted to face a welterweight in Britain, the other being that Brook was eager to sign his name on a contract next to Golovkin’s when every other top middleweight conveniently misplaced their pens. For a 34-year-old uncrowned middleweight king running out of time to make his mark in the sport, the choice between facing a top welterweight on a UK pay-per-view extravaganza and not fighting—or even worse, fighting Erislandy Lara—was no choice at all.

Let the record also state that Kell Brook—who himself had been waiting a long time for the chance to perform on a stage worthy of his talents—fought valiantly through most of five brutal rounds. ‘Special K’ even landed some leather on Golovkin, most notably a roaring uppercut in the second round, and tried as best he could to match the champion’s offensive output. In the end, however, Kell was simply overmatched: Golovkin was not only significantly more powerful, he also landed the sharper punches, just as he was better at cutting off the ring than Brook was at moving out of harm’s way. 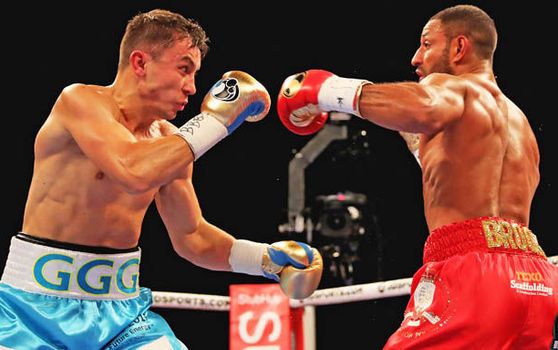 Fighting with refreshing vigor and, by his standards, even a measure of abandon, Golovkin employed his left hand often, hammering Kell with hard jabs and threatening hooks. The occasional lead right also made an appearance, but the footwork is what really made Golovkin all the more lethal. No matter what unoccupied segment of the ring Brook tried to retreat to, GGG always knew where to find him and then punish him.

Still, Brook proved competitive in spots, landing a few quick combinations, and at times engaging fire with fire. He did enough to steal at least one stanza from the champion, but the contest might have been decided as early as the second round, when Golovkin broke the Brit’s right eye socket, probably thanks to one or more of those nefarious left-hooks. The Brit endured valiantly until the fifth, when his corner threw in the towel, thus awarding Golovkin a TKO victory.

That being said, there were moments during the fight in which Golovkin looked more vulnerable than usual, getting hit with surprising frequency, absorbing some big shots from Kell, and even appearing wobbly at one point. Depending on where your allegiance lays, you will either determine those moments prove Golovkin’s not all he’s been made out to be, or you’ll say he absorbed more shots in the interest of putting on a Big Drama Show. Perhaps the more interesting question is whether such vulnerability will grant an incentive to potential opponents—Danny Jacobs, Billy Joe Saunders, Canelo Alvarez—to actually get in the ring with the Kazakh champ. 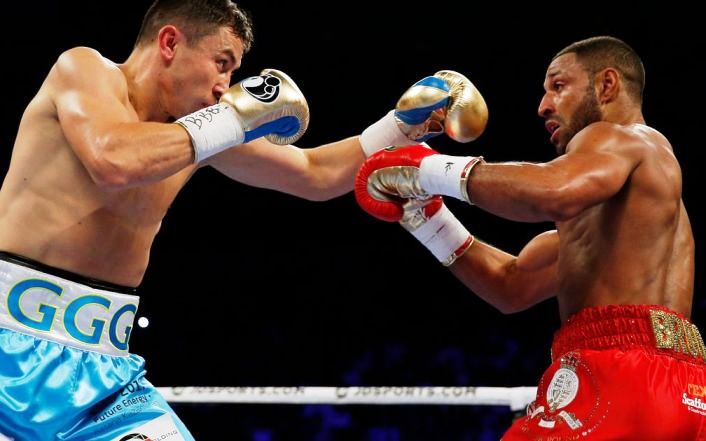 Social media stayed abuzz during and after the fight, signaling that the efforts of promoters and networks to inject intrigue into a bout that played out the way everyone expected it to when it was first signed, paid off to some extent. It’s true Kell Brook has the attributes of a very good welterweight, but it’s equally true that he was also unproven as the cream of the crop in that division, not to mention as a competitor at a weight above 147 pounds.

So what purpose, then, did Golovkin vs Brook serve? For Brook, the bout represented a long shot at greatness, denied as he has been of a signature win beyond his title-winning effort against Shawn Porter over two years ago. For Golovkin it represented the chance to stay active, earn a sizeable paycheck, and augment his brand value in a country filled with boxing fans. For other stakeholders, it was little more than a chance to fill their pockets with pounds sterling. For fans, it was another mismatch pumped to the point of bursting thanks to the participants’ names, and little else.

Thus, we must now ask: what next? For Kell Brook, it will be a move down the scales to junior middleweight, where his name recognition should blend nicely with his recently exposed vulnerability to entice champions and challengers to face him in his home country. And kudos to Brook’s corner for stopping the contest earlier rather than later, as it prevented Brook from absorbing unnecessary punishment that might have turned an already grave injury into something truly regrettable. It also guarantees Brook will face the challenges awaiting him at 154-pounds in the best possible shape. 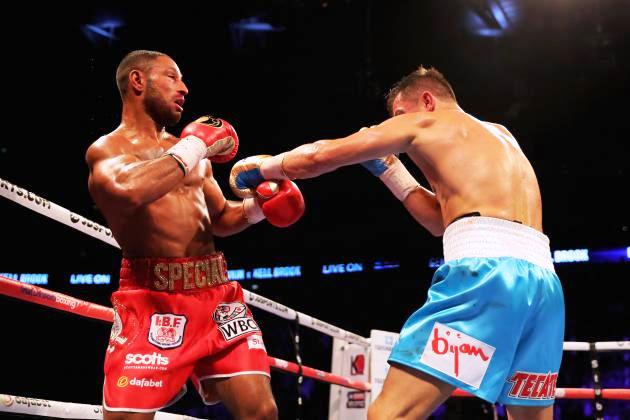 For Golovkin, what the future holds is surely lots of sitting by the phone and hearing other top middleweights bitch about money. Gilberto Mendoza, head of the WBA, has reportedly given Golovkin—the organization’s middleweight champ—and Danny Jacobs—the organization’s other middleweight champ—30 days to come to terms to a fight and 120 days to actually fight. If you think that sounds authoritative enough to guarantee Golovkin vs Jacobs happens next, you’re either a newcomer to the world of professional boxing or you need a refresher on mamadas.

Team Golovkin have repeated ad nauseam that their intention is to unify the middleweight crown before considering moving up in weight. This means that if Team Golovkin have their way, fights with Danny Jacobs, the reclusive Saunders (holder of the WBO belt), and un-middleweight Alvarez—who Forrest Gumped his way to the lineal middleweight title last year—are in the offing. Then again, team Golovkin are not used to getting their way, given that their charge’s fearsome reputation far outweighs the financial reward for fighting him. 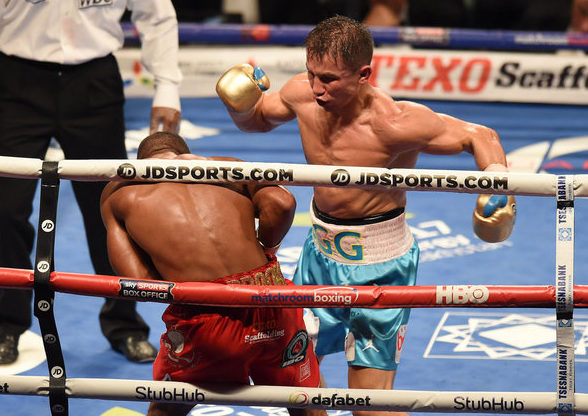 But perhaps a single number will be enough to get Golovkin at least one of the fights he craves: sixty. That is the number of power punches Kell Brook landed on Golovkin, only fifteen fewer than the Brit absorbed. That single number shows the Kazakh beast can, indeed, be touched. A welterweight barely made him blink, but what would a full-fledged middleweight do given five dozen opportunities to land leather on him?

Fans would surely be more willing to pay to know the answer to that question than for yet another mismatch featuring a wacky size differential. If Golovkin vs Brook taught us anything, it’s that weight classes exist for a reason, and matchmakers disrespect them at a cost. Kell Brook—a star welterweight—deserves better than to have his orbital bone broken by a natural middleweight, just like Gennady Golovkin deserves the chance to test himself against the best opposition available.

And if there’s a silver lining to Golovkin vs Brook, it’s that the early stoppage Golovkin scored guarantees the talented Brook lives to fight another day. On the other hand, the Brit’s valiant effort and relative success might just help Golovkin get a significant fight next. For once, what comes after a Golovkin fight might actually be interesting enough to justify his latest annihilation job. Or so we hope.          –Rafael Garcia 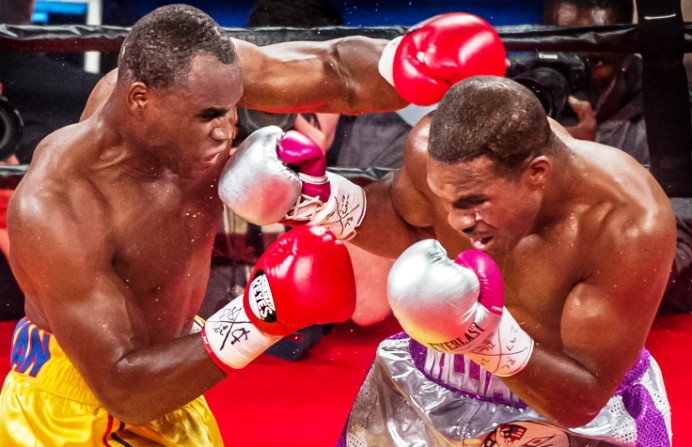 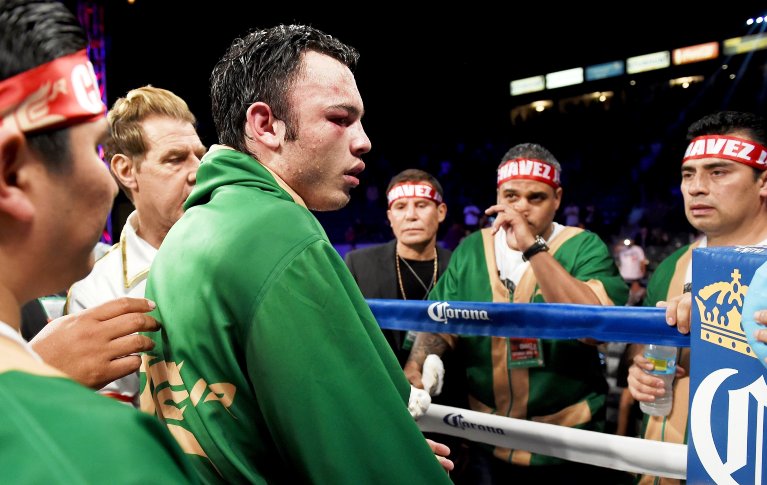 The Long Journey Back 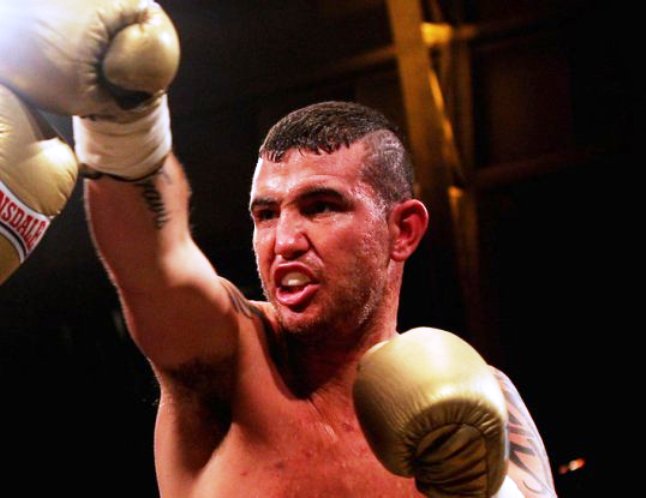 5 thoughts on “Live To Fight Another Day”