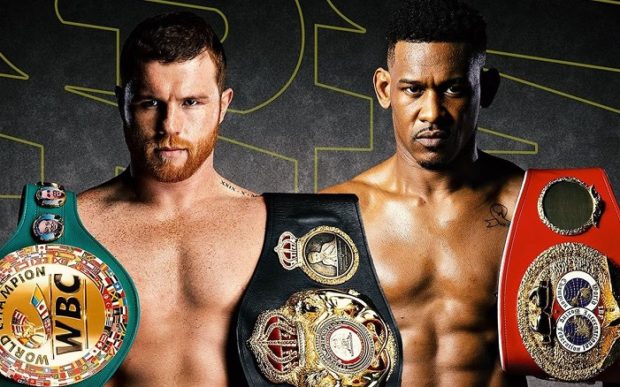 We’re almost half-way through 2019 and boxing fans can pretty much count on one hand the number of truly compelling, high-profile and legitimate best-vs-best contests we’ve been able to enjoy this year. Which only makes Saturday’s showdown between two of the finest active middleweights in the world a truly must-see match-up. Saul “Canelo” Alvarez vs Danny “Miracle Man” Jacobs is a top-shelf tilt as no one questions either man’s credentials. So naturally, when it’s a big fight between top talents, the crew at The Fight City offer up their picks and here they are. Check ’em out:

Whether or not you regard Canelo Alvarez as the legitimate middleweight king after his controversial bouts with Gennady Golovkin doesn’t really matter now. Either way, he’s a top fighter and on Saturday he faces the third best middleweight in the world, not to mention someone who supersedes Canelo’s own capacity to put on pounds between weigh-in and opening bell. With both also being judicious punchers who pack legitimate power, we can expect a tension-filled standoff that occasionally explodes into bursts of firepower. That said, both proved their chins against Golovkin, so it’s hard to envision a premature ending. In fact, Canelo and Jacobs are so well matched that the three-to-one margin with which the bookies favor Canelo probably speaks more to the Mexican’s pull with Vegas judges than anything else. But, all else equal, go with the house fighter: Canelo by decision.  –Rafael Garcia 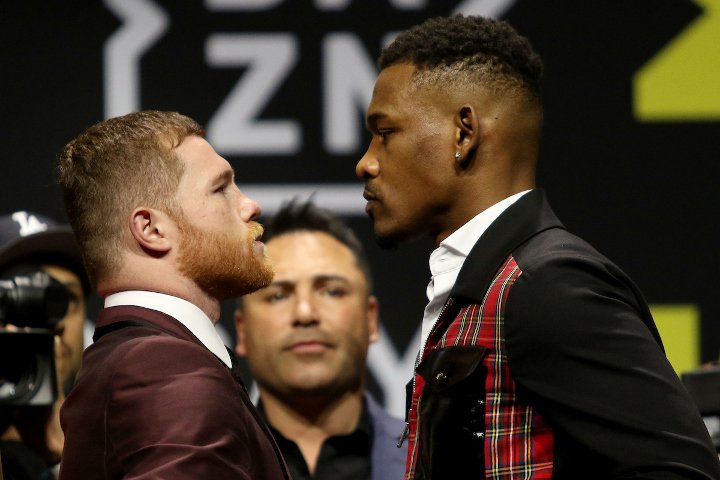 Jacobs, a fine boxer with decent power in both hands, will enjoy a considerable height and reach advantage over Canelo. Given the Mexican’s star power, it’s unlikely Danny will win on the cards, but if he can utilise his jab along with lateral movement to control range and keep Canelo off balance, he may get Alvarez to commit more to his attack so he can be lured into a right hand. Canelo has a solid chin, but any man hit correctly can be knocked out.

Canelo has, however, developed into one of boxing’s most well-rounded fighters. The shuffling footwork that enables him to close the gap without jeopardising his defense or offense is impressive, as is his ability to sneakily out-jab taller opponents. And as far as counter-punching in the pocket goes, Canelo stands alone. But perhaps the greatest concern for Jacobs is how Canelo masterfully sets traps and misdirects an opponent’s defense to create openings. Jacobs has proved vulnerable to indirect, body-head attacks in the past, so look for Canelo to fake a jab to the body and then follow up with an overhand right (kryptonite for a taller boxer), or to dip and then wind a left hook around Jacobs’ right glove.

Styles make fights, as do body types, and I suspect Jacobs’ height “advantage” may work against him. If Canelo establishes a body attack, rest assured the head won’t be difficult to find. Canelo by TKO.      — Lee Wylie 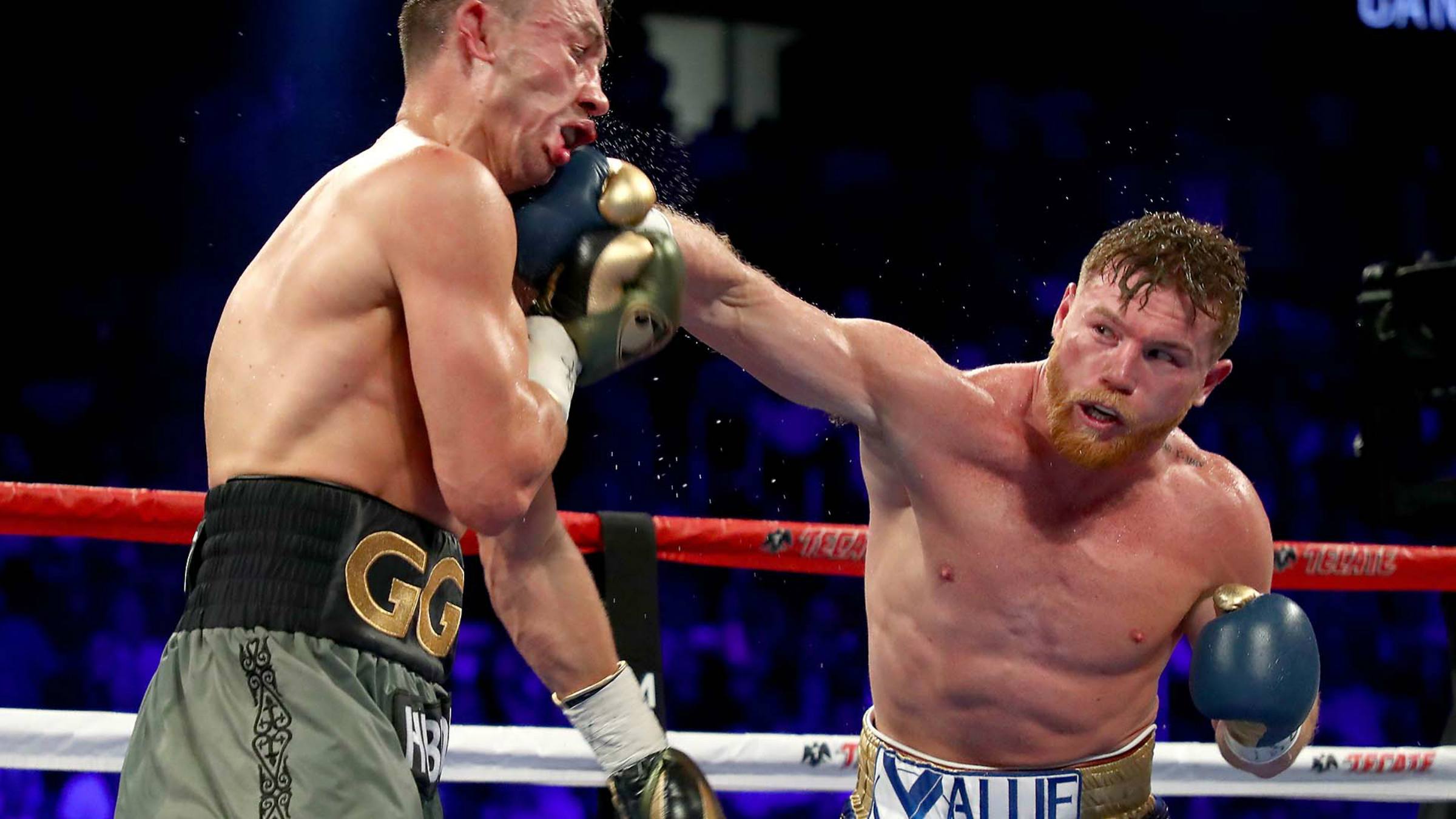 Canelo-Jacobs has all the makings of a technical war, similar to Canelo-GGG and Canelo-Cotto. Jacobs brings a lot of the athleticism to the table that GGG doesn’t, and certainly has the punching power to keep Canelo on his toes. However, what we haven’t seen from Jacobs on the biggest stage is the ability to elevate his game to the highest level. Against GGG, he had the then unbeaten Kazakh in an uncomfortable position for much of the middle rounds, yet couldn’t crank it up to another level and close the show. I expect Canelo to start slow and maybe drop some of the early rounds, but ultimately close the distance and start to carry the fight in the latter rounds, maybe even hurting Jacobs in some of the exchanges. I am picking Canelo by a competitive but clear-cut unanimous decision, by about 116-112 type margins.        — Alden Chodash

The fact that this fight has a mandatory max rehydrating weight is already troublesome as Jacobs is rumored to weigh as much as 180. Add to the fact that Canelo is a nasty body puncher, a pressure fighter and that Jacobs likes to dink around with different styles, makes me concerned for Jacobs. Canelo gets the finish and starts focusing at 168 pounds. Canelo TKO 10.      — Chris Connor

Although I’d love to see Jacobs get the win here, I don’t know if he has what it takes to impose his will on Canelo for the full twelve rounds. Both are at the top of their games with excellent skill-sets and I see this being a hotly contested battle. I believe in both guys’ stamina and toughness, which is why I see it going the distance. As much as I’d rather it not be the case; Canelo wins a close, controversial decision.         — Jamie Rebner 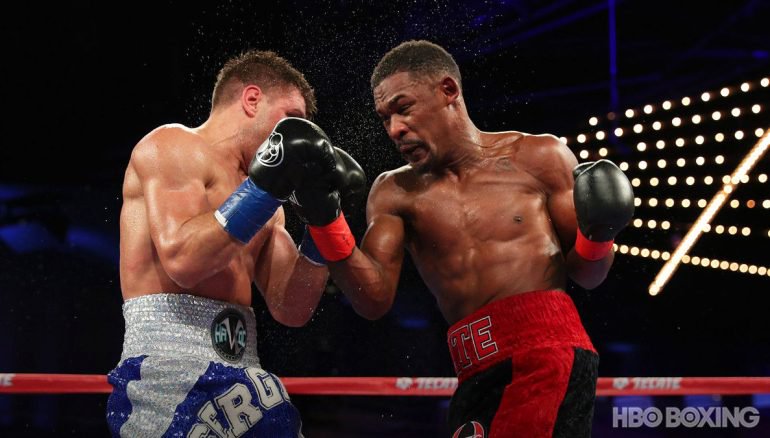 I love this fight. First off, I’m glad too see Jacobs get another crack at glory. I was at the GGG bout and remember not being the only person there who felt Jacobs had pulled it off, though it was certainly very close, so it’s nice to see the Miracle Man back in the spotlight. I’m also glad to see Canelo challenging himself on a regular basis. But having said that, I find it very hard to say with confidence that anyone can get a fair shake against Canelo. This isn’t his fault. Judges just love the guy and that’s all there is to it. Throw in the fact that the man can take a shot with the best of them, and it’s hard to imagine Jacobs walking away with the win. If the Jacobs who faced Golovkin steps into the ring on Saturday, Canelo will get a real run for his vast amount of money. But if another Jacobs shows up, it will be a one-sided affair. Either way, I think it’s Canelo by decision.       — Sean Crose

Canelo is all wrong for Jacobs and this will not be a particularly competitive match, unfortunately. Jacobs is a good boxer, no question, but at some point the Mexican is going to set him up for the big shot and get it home. If Jacobs survives that, he will then retreat and stay on the defensive and from there on it will be a one-sided beat down. Canelo by late stoppage or unanimous decision.      — Robert Portis

I’ve waffled on this one. I thought Canelo lost both fights to Golovkin, though both were certainly close. His toughest non-GGG bouts have been against quick, mobile boxers and Jacobs has the tools and skill-set to give Canelo a long, frustrating night. And yet, Alvarez has improved significantly in recent years, and has also enjoyed the benefit of rather generous scorecards, a tough combination to overcome. I’m thinking Jacobs builds a lead early with his jab and movement but Canelo will then close the gap enough in the later rounds to make it close. Call it a narrow victory on the cards for Canelo, where a draw or a close Jacobs win appears fair.            — Hunter Breckenridge

Jacobs is a very capable middleweight that can pose a serious threat to Canelo. Unfortunately, Canelo will receive the decision. He is the next golden boy and unless Jacobs can pull off a KO  I see Canelo counter-punching his way to a unanimous decision.  — Jeffrey Fuss

As good as Jacobs is, I feel Alvarez is superior. His control of pace, distance and rhythm is superb, and he’s become an incredibly well-rounded fighter in the last two years. Jacobs will have moments of success, particularly in the first half, but I see most of the eye-catching and hurtful shots being landed by the Mexican as he pulls away down the stretch. Canelo by unanimous decision.        — Ronnie McCluskey 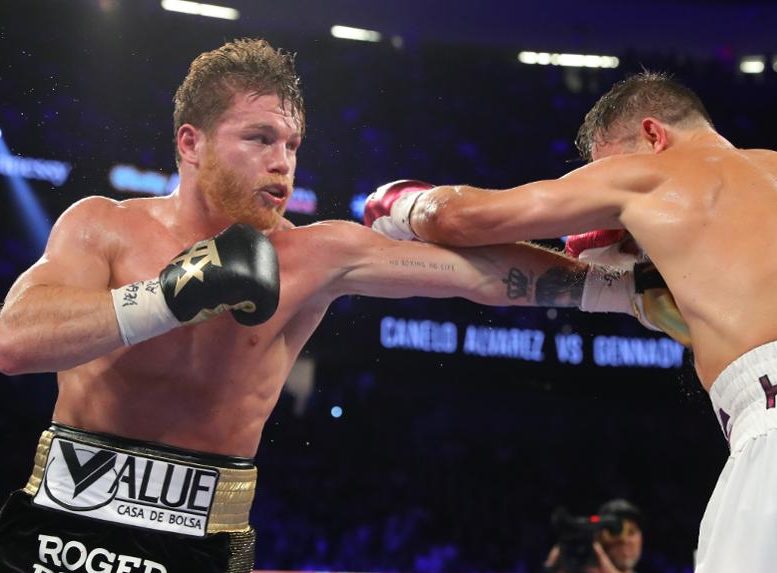 I’ve got Canelo by a slim, controversial decision. I thought Jacobs fought well against Golovkin, and while I had GGG winning I can see an argument for Jacobs. Meanwhile, I think Canelo lost both his fights with GGG, though the second was closer. Jacobs is a huge middleweight with good skills and big reach, the latter of which will allow him to use his jab and keep Canelo fairly distant, much like GGG did in that second fight. But Canelo will land the flashier punches and even if Jacobs performs well, I suspect the score cards will go Canelo’s way.      — Joshua Isard

Jacobs has alluded to the fact that he sees his size and strength giving him a significant advantage, while his trainer, Andre Rozier, claims his fighter’s “skill set and ring generalship” will prove too much for Canelo. All of these factors will present the Mexican with problems to overcome, but none that he can’t overcome. Regardless of what you felt about the decisions in the two Golovkin fights, Canelo showed he is a very strong middleweight. And while he will have to overcome disadvantages in height and reach, I think Canelo’s superior ring generalship will be a deciding factor here. He’ll be patient, counter and jab when it suits him, using his upper body movement and strength to nullify Jacobs’ attacks, but then close the distance and land more accurate and eye-catching punches as the fight wears on. Canelo wins by decision. And this time it won’t be controversial.             — Matthew O’Brien

This will be an entertaining and competitive match as Canelo is an aggressive fighter who brings it and so is Danny, but Canelo is bringing a little more. Also, factor in that Canelo took Golovkin’s best shots and didn’t go down and Danny is no GGG in terms of punching power. Mexicans can take it; that is a signature trait of the Mexican boxer. I witnessed many a fight south of the border in which two Mexican warriors would pummel one another’s brains out, with no stoppages by the refs, until one man is completely unconscious. Canelo’s jaw is Mexican steel and while Danny will be in this fight, he isn’t hitting hard enough to hurt Alvarez. Stoppage or points, the hand the ref raises in the end will be Canelo’s.        –Ralph M. Semien 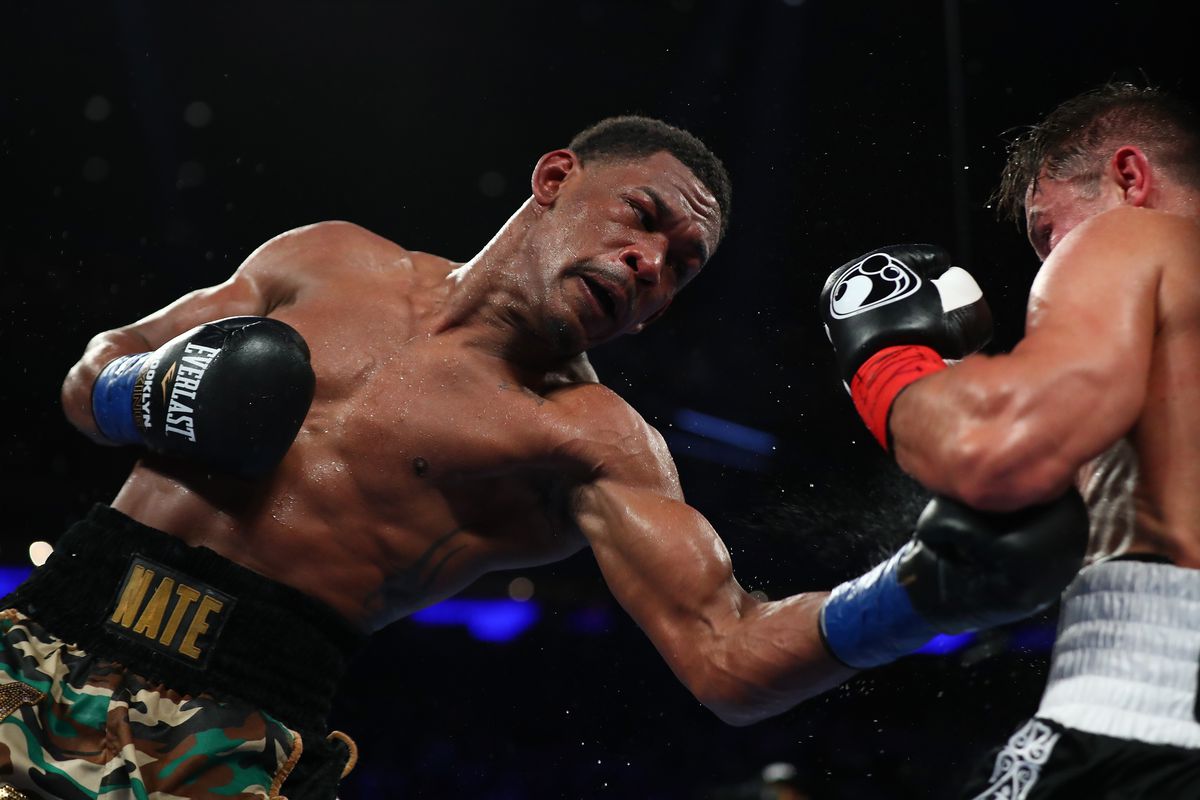 While this is a high level match-up between two very good fighters, it’s difficult not to favor Canelo. The Mexican star is far more likely to shade a decision; he’s shown a sturdy beard against several hard punchers, and he’s clearly improved as a fighter in recent years. Jacobs’ opening is that Canelo tends to not be very active from round to round and does a lot of posing. Jacobs isn’t really a volume or pressure fighter, however, and he can perform inconsistently. Add in potential weight hindrances and this loses a bit of its intrigue. Canelo Alvarez by decision.             — Patrick Connor

This is a relatively even match-up, so while Jacobs has the length, power, and footwork to box from the outside to perhaps outpoint Canelo in the eyes of fans, he’s realistically going to have to take chances to separate himself from Alvarez in the eyes of the judges. The problem for Jacobs is that a relatively close-quarters battle favours Canelo, who is an exceptional counter-puncher with deft upper body movement. I see Jacobs taking a slight lead into the fight’s second half, after which Canelo starts to dictate the geography of exchanges, leading to a clear-cut points win for the Mexican.           — Zachary Alapi

If you wish to better comprehend the phenomenon that is Saul “Canelo” Alvarez, just read Rafael Garcia’s excellent essay, “The Rainmaker.” Once you do, you will understand why Alvarez losing by points in Las Vegas is an unlikely proposition right now, so to pick against him is to advance the idea that Danny Jacobs can dominate the Mexican or batter him into submission. But if a truly dangerous puncher like Gennady Golovkin couldn’t buckle Alvarez or put him down, how can Jacobs? And if the American attempts to out-box Canelo by sticking and moving, how many rounds can he hope to win on the official cards? And so what should be an intriguing match-up between two top middleweights becomes an anti-climactic proposition and trying to imagine a Jacobs victory seems more trouble than it’s worth. Canelo by unanimous decision.      — Michael Carbert