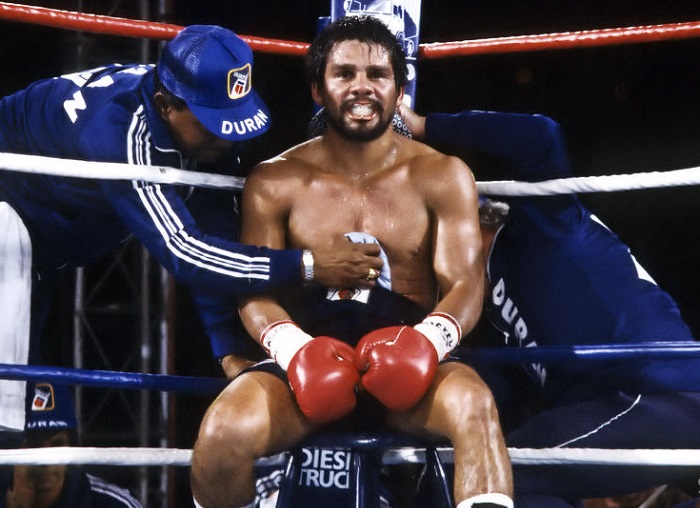 If you want to have a special tribute to Roberto Duran, then you have to do it in June. It just so happens that, with few exceptions, Duran secured his most glorious and pivotal triumphs in the month given to the queen of the gods.

In June of 1972 he won his first world title against Ken Buchanan. After dominating the lightweight division, he moved up to the welterweights and scored one of the most impressive victories of his entire career in June of 1979 when he dominated former champion Carlos Palomino. Then in 1980 he cemented his status as a true all-time great when he outpointed Sugar Ray Leonard in June of that year. And following the disgrace of the “No Mas” fight, he redeemed himself and won his third world title when he battered Davey Moore in Madison Square Garden in June of 1983. In fact, that crucial win took place on Roberto’s birthday, June 16, so there’s that to consider as well.

There’s also the added significance of the fact that June 20, 2015 marks the 35th anniversary of one of the most eagerly anticipated and significant boxing matches of all time, Duran vs Leonard I, aka “The Brawl in Montreal.”

In short, there’s plenty of excuses in the month of June for serious fight fans to indulge in some nostalgia and relive one of the most singular careers in the long history of boxing, that of the legendary “Manos de Piedra,” Roberto Duran.

With the exception of Muhammad Ali, possibly no pugilist in the last 50 years has inspired more adulation and passion than Mr. Hands of Stone. Why is this?

On one level, it’s easy to explain: for more than two full decades, the name Duran meant excitement. He was that rare boxer who was almost always fun to watch. Even when on an off-night, or when blowing out of the ring a hopelessly overmatched opponent, Duran gave fans reasons to pay close attention. He combined explosive aggression, crippling power, canny defensive moves and clever counter-punching with a certain bravado, a cockiness, which most other champions simply lacked. Duran didn’t just win rounds and win fights; with few exceptions, he won with dramatic flair and style, exhibiting a natural talent for both fighting and performing which those who follow boxing know is exceedingly rare. 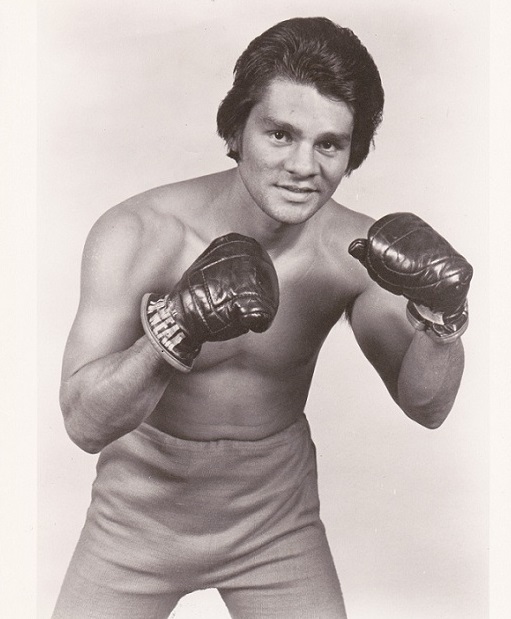 There was also the fact that fans recognized in Duran a true competitor and a fighter who, with one glaring exception, gave his all in the ring every time out. Unafraid of men bigger or stronger, and willing to compete anytime and anywhere, Duran took on all challenges, and such was his reputation and character that even the most ignoble defeats did not undermine his reputation or the love of his most ardent fans. Part of what attracted them was the sheer joy Duran exhibited in the ring when he was at his best. Duran was that rare boxer who truly loved to fight, who in fact expressed himself through his ringcraft in the same way a skilled artist does with a paintbrush, or a gifted musician with a violin or a piano. Boxing was the medium for Duran’s passion and defiant spirit, and his exuberance and originality inspired passionate fight fans to love him all the more.

There was something old-fashioned about Duran, something timeless. The fearless and ferocious way he fought, and the attitude and bearing which he brought to the ring, linked back to boxers of yesteryear, to a perhaps semi-imagined Golden Age when the sport was somehow simpler and purer. One sensed that Duran, like the warriors of old, didn’t care who he fought or how often he stepped into the ring. He let his manager and trainers decide such things while he was content to simply dispatch the next opponent and notch another win. Reinforcing this was the fact that his trainers, Ray Arcel and Freddie Brown, were in fact relics from another time, men who had worked with greats of the past such as Benny Leonard, Ezzard Charles and Rocky Marciano.

Then there’s the stories and legends, some true, some exaggerated. Either way, it takes a special person to inspire such tall tales. But it is a fact that Roberto had a pet lion and used to take it for walks in Panama, causing people to panic and run for safety. And that when in a surly mood he sometimes took his venom out on sparring partners, scoring knockouts in the gym. Then there are the legends about him knocking out a horse with one punch, and surviving a plane crash in the ocean and swimming to shore. True? False? Who knows? But it is a fact that Duran loved to hang out with his fans, without bodyguards or a security detail. A talented musician and dancer, he played the bongos with the Latin bands and partied with the Latin folk in New York City, Miami or Panama. Duran always had the common touch, was always accessible. He was a star and a legend but also someone to whom the common person could easily relate.

In the time following the “No Mas” disaster and his glorious win over Davey Moore in 1983, easily the most difficult period of Duran’s career, he unsuccessfully challenged Wilfred Benitez for the super-welterweight world title and for that match his entourage wore baseball caps and t-shirts inscribed with the simple statement, “Duran is Duran.” What other fighter — indeed, what other athlete — could be referred to in such a manner? But the odd catch-phrase worked because it spoke to the many who had fallen in love with a unique public figure and an exceptional fighter, a boxer with a strange mystique and style that was his very own, that blend of savage aggression and sublime artistry which one witnessed only when Roberto Duran was firing on all cylinders. 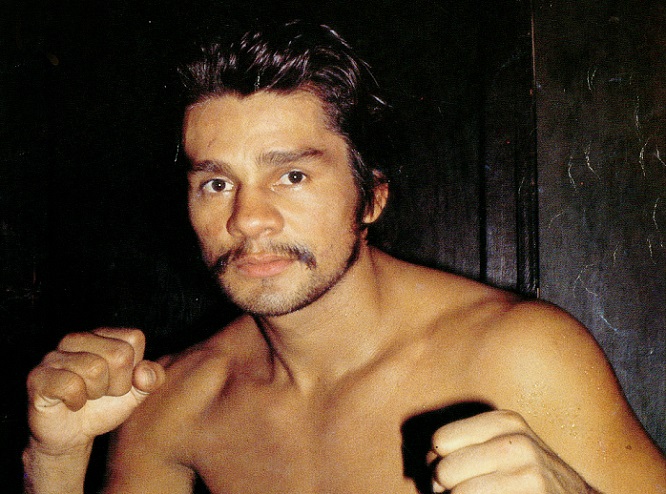 Duran’s ring achievements are familiar to most boxing fans. In twelve years, 1968 to 1980, he fought 72 times, losing only once, and in 71 victories he notched 55 knockouts, earning his nickname, “Manos de Piedra.” The vast majority of his wins up to that point were dominant and, at times, frighteningly brutal. His only rivals for status as Fighter of the Decade for the 1970s were legendary champions and all-time greats Muhammad Ali and Carlos Monzon; most serious pundits tabbed Duran as the best of the three.

Having avenged his lone defeat to fellow lightweight titlist Esteban DeJesus twice over, he moved up to the welterweight division and capped his extraordinary run with one of the greatest victories in the history of boxing, a 15 round decision over exceedingly gifted champion, Ray Leonard. The new “Sugar Ray” was bigger, younger and faster, but he could not overcome a truly extraordinary performance by his veteran opponent. Duran surprised many with his clearcut win over the sport’s biggest star and now assumed for himself the status of both the best fighter in the world, pound-for-pound, as well as arguably the first true boxing superstar from Latin America. Even though Duran spoke little English, his natural charisma transcended cultures and countries and his huge victory won him legions of new fans.

The rest of Duran’s amazing career was a roller-coaster, huge highs and dispiriting lows. And indeed, part of what makes Duran so special was his ability to resurrect himself, again and again, even after everyone had buried him. Having inexplicably quit against Leonard in their New Orleans rematch, many thought Duran was all washed up right then and there. In 1982, after losing to Benitez and then to an unknown in Kirkland Laing, the verdict was unanimous: Duran is finished. But the universal dismissal of “Hands of Stone” only made his subsequent comeback and world title win over Davey Moore that much more dramatic and extraordinary.

His defeats to Marvin Hagler and Thomas Hearns appeared to bring a conclusive finish to an extraordinary career, but less than two years later he returned. A close decision loss to tough middleweight contender Robbie Sims had everyone begging Duran to walk away, but Roberto persevered and to the delight of his most loyal fans he redeemed himself once again, scoring another historic win and his fourth world title with a most unlikely victory over tough Iran Barkley in 1989.

Even in his 40s, long after his reflexes and natural gifts had faded away, he continued to compete and continued to sell tickets. Indeed, Duran never really lost his marketability, that mystique, that unique allure which inspired such astonishing loyalty in fight fans around the world. He never wanted to retire and, in truth, he never did until it was forced upon him, injuries from a car accident in October 2001 compelling him to finally stop fighting. Just a few months previous he had competed for the final time, at the age of 50, dropping a decision to Hector Camacho.

Duran’s status and popularity have never waned in the years since. He remains a legend and a figure of fascination for boxing fans and historians alike. Few boxers have been more celebrated and he remains part of a very elite group of champions who are always mentioned when the discussion turns to who are the greatest boxers ever, pound-for-pound. Of fighters who have competed since say 1970, perhaps only Muhammad Ali is more loved.

So with all that in mind, we’ve decided it is entirely appropriate to set aside seven days in the month of June to further celebrate the legacy of “Manos de Piedra” and to remember, 35 years after that glorious night in Montreal, his greatest victory, indeed, one of the greatest victories ever, for any fighter. Thank you, Roberto Duran, for all the excitement and all the memories. And welcome, boxing fans, to “Hands of Stone Week.”           — Michael Carbert 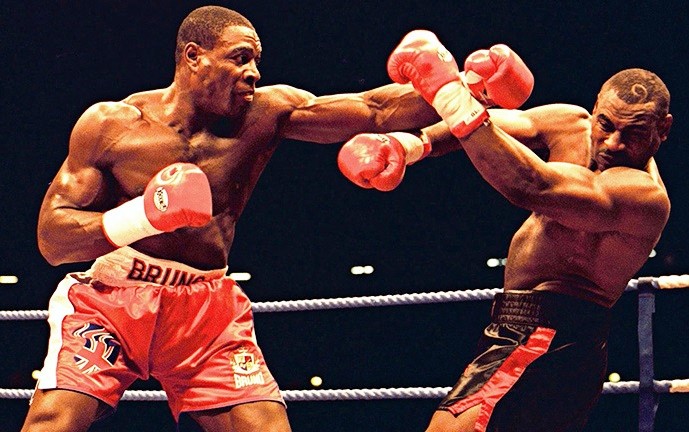 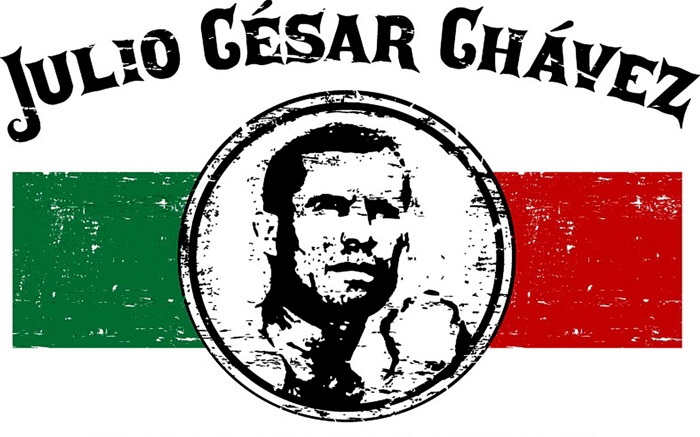 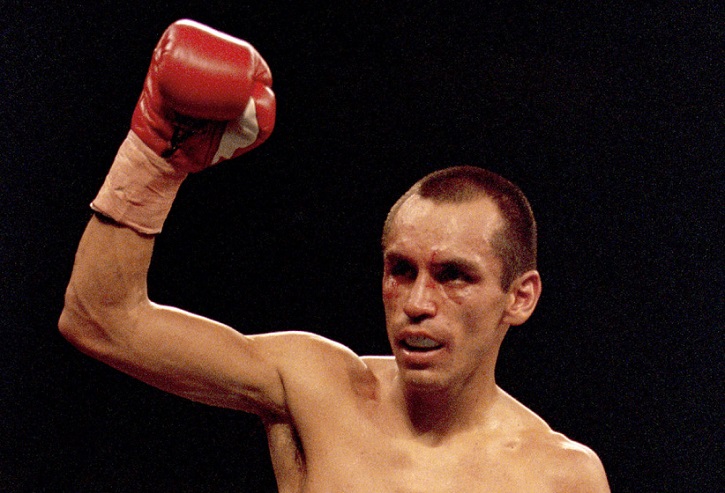 Sugar Ray Robinson, regarded by many as pound-for-pound the greatest boxer of all time, rarely found himself the underdog, but

Tony Canzoneri was already a lock for the Hall of Fame, not to mention an all-time great lightweight when he