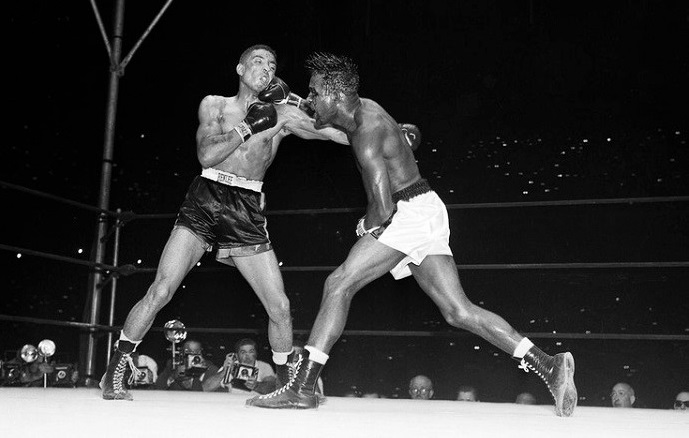 The first Robinson vs Turpin battle took place in London, England just two months before the second, and it will forever stand as one of the greatest upsets in the history of fisticuffs, but no one could call it a fluke. Apologists for the man many regard as the finest boxer of all-time point to Sugar Ray not taking the match seriously, the bout one of a series in an extravagant European tour for Robinson and his massive entourage.

Despite the fact that Ray did engage in six matches in just seven weeks, it had been an excursion light on serious combat and more about publicity, prestige and living the high life. Now a genuine crossover star, Robinson traveled through Europe with his own personal hair dresser, a dance instructor, a golf pro, a singing coach, his famous pink Cadillac, and a dwarf nicknamed “Arabian Knight.” The match against Randolph Turpin was to be the finale of the tour, a title defense at Earl’s Court in London against a legit, if little-known, contender. The tilt went fifteen rounds and at the final bell, to everyone’s astonishment, there was no doubt as to who deserved to have their hand raised by the referee.

“I have no alibis,” said Robinson. “I was beaten by a better man.”

What else could he say? It wasn’t even close. The challenger, seven years younger than Ray, was in charge from the outset before Robinson attempted a late rally. But the final three stanzas were all Turpin and ringsiders found it impossible to score more than four or five rounds for the American.

As skilled as Robinson was, he was also accustomed to enjoying certain advantages. Generally taller, longer, and more mobile than his opponents, these attributes, along with his formidable punching power and blazing hand-speed, combined to neutralize whatever his adversaries brought to the ring. But naturally strong and sturdy opponents who applied non-stop pressure could trouble him, as demonstrated in his tough battles with Jake LaMotta, and as would be the case in the future against Carmen Basilio and Gene Fullmer.

Turpin may not have been in Robinson’s league in terms of experience, smarts and technique, but he was younger, fresher and exceptionally strong, his muscular frame more than substantial enough to allow him to take Ray’s shots and keep driving forward. Constant pressure and excellent stamina allowed the Briton to out-work Robinson and bring the world middleweight title back to Albion’s shores. And considering how the bout was meant to be the climax of Robinson’s European tour, the impact on Sugar Ray’s reputation was nothing short of devastating. Then again, Ray was now 30-years-old and a veteran of 132 pro bouts. Maybe the glory days were finally over for the great Sugarman. Maybe it was time for Ray to say goodbye.

But before that could happen there was the rematch, with everything Robinson had built up over the last two decades at stake, including the star power he had put on display during that ill-fated tour, pink Cadillac and all. Sugar Ray Robinson was more than a boxing champion; he was a legitimate attraction, a celebrity, a most rare talent, and something close to a living legend for the millions of black Americans who suffered the indignities of being second-class citizens in their own country. But another defeat to a contender few had previously heard of would put an end to all that. In short, no fight up to this point was more critical to Robinson’s career.

Sports fans well understood the gravity of Robinson vs Turpin Part II and a huge crowd of over sixty thousand set a new record for a non-heavyweight gate at the Polo Grounds in New York, with a gallery of glittering celebrities at ringside. What they all saw for nine fast-paced rounds was a grueling, tightly contested battle. Robinson was more assertive than in the first meeting, bringing his power to bear from the outset with two-fisted flurries to Turpin’s body. He hurt the Englishman with right hands in both the second and third rounds and in the fourth he scored with some vicious uppercuts. But in the middle rounds Ray began to slow down and started missing while Turpin muscled him around in the many clinches. 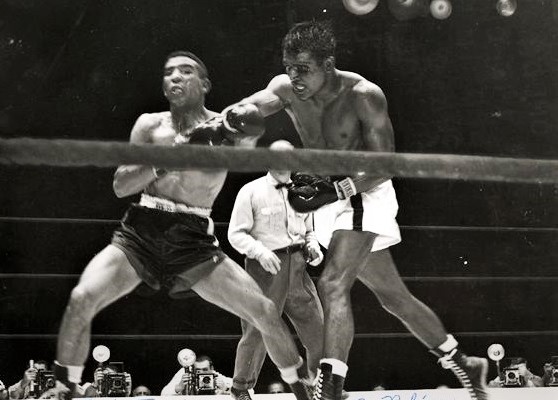 By round nine it was clear the momentum had shifted; a tiring Sugar Ray was again struggling with Turpin’s greater strength and seemingly boundless stamina as the contest devolved into a messy affair with plenty of wrestling and rough stuff. There was no doubt Ray was ahead on points, but there also no question that Randolph was the stronger and fresher man. Robinson’s fans grew increasingly tense as Turpin appeared to be closing the distance and making it his kind of fight.

In London Ray had suffered a bad cut over his left eye and in round ten the wound re-opened, possibly from a clash of heads, and if things weren’t already going south for Robinson, suddenly the American’s face was bathed in blood. Sugar Ray didn’t hesitate; showing more energy than he had for several rounds he opened up with his big guns, gambling on his power. An overhand right thudded home on Turpin’s jaw and the Briton’s legs buckled. Hurt, the champion alternately retreated and hung on as a desperate Robinson pursued and worked to find punching room. The referee separated the fighters and the Briton, seeking to clinch again, came straight at Ray, wide open, and the Sugarman didn’t need to be asked twice: he blasted Turpin with a huge right hand that put the champion on his back. 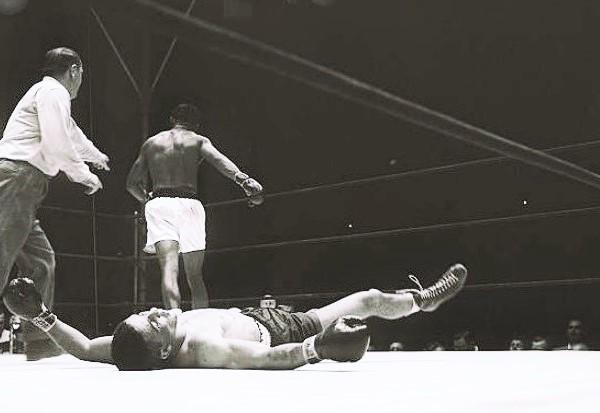 Turpin beat the count but Robinson knew he couldn’t let him off the hook. As he would put it afterwards, it was “do or die.” Determined to decide the contest before the cut and the ringside doctor could, Ray stalked Turpin, forced him to the ropes, and then unleashed a fearsome barrage of power punches. The dazed champion had no reply; his legs were gone and he couldn’t get off the ropes. He tried to bob and weave and slip the bombs exploding all around him but Sugar Ray’s attack was relentless. Robinson, his face covered in crimson, held nothing back, and after five clean blows landed in quick succession referee Ruby Goldstein, with eight seconds left in the round, stepped in to halt the one-sided battering. 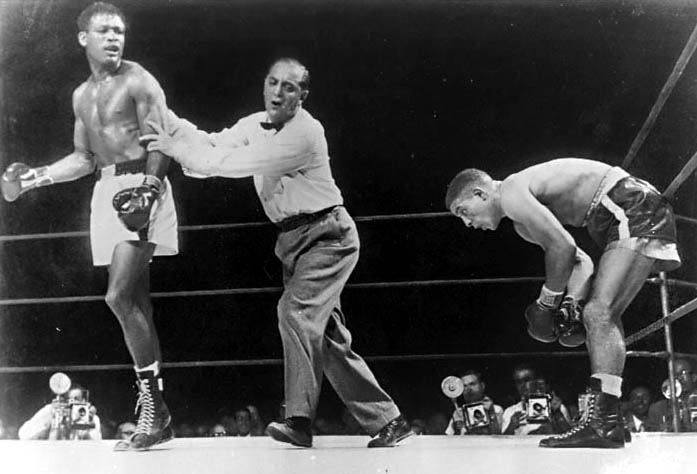 Turpin protested the referee’s decision. “I was rolling with the punches and my head was clearing,” he declared. “There were only seconds remaining. I didn’t want to go down because I knew they would end it.” But what Turpin neglected to note was that he had failed to defend himself as Robinson teed off. By staying on the ropes and taking shots, he had left Goldstein with little choice. Simply put, he had blown it. The middleweight crown went back to Sugar Ray and America. And there would be no Robinson vs Turpin Part III.

Meanwhile, in the nick of time, the great Sugar Ray Robinson had not only regained the world title, but he had saved his career in one of boxing’s most famous and dramatic stoppages. Clearly, he wasn’t quite ready to say goodbye.      — Robert Portis 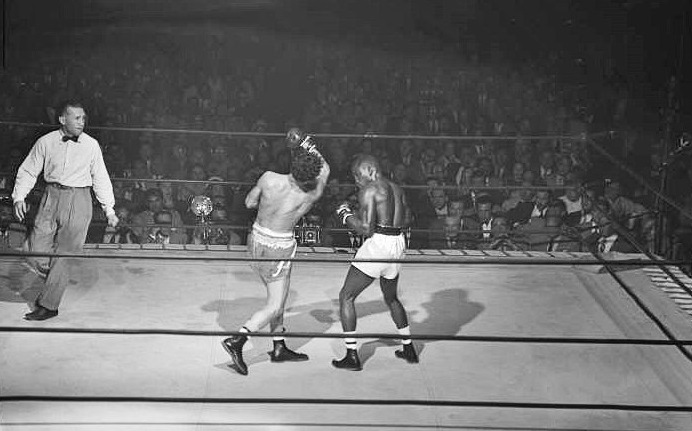 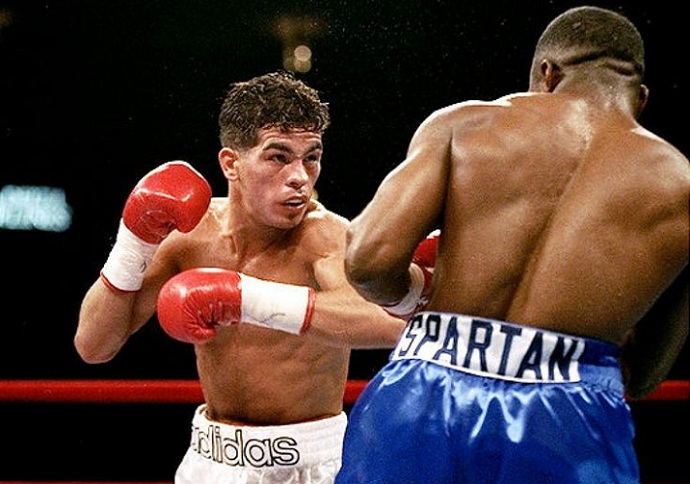 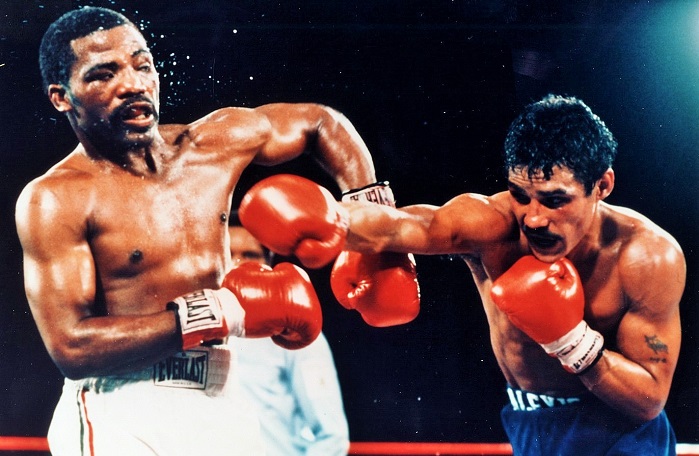