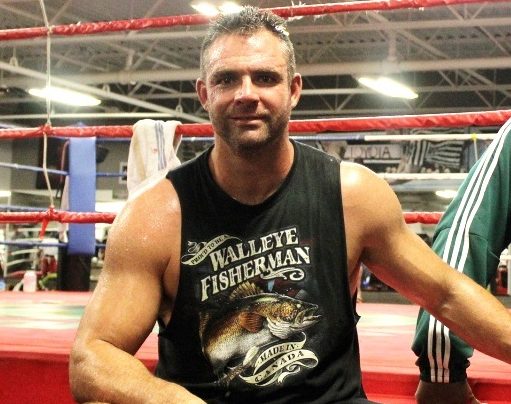 “Joël Thériault, he’s probably the toughest guy I’ve ever seen. NHL, AHL, it doesn’t matter. He’s not only a good fighter, he’s intimidating, with his eyes, with everything. Everybody’s afraid.”    — Martin Lariviere, a veteran of 420 hockey fights and Theriault’s teammate in Thetford Mines.

This Saturday, a man who’s brought order and anarchy to arenas across Quebec will make his professional boxing debut at La Tohu theater. A product of Montreal’s south shore, Joel ‘The Animal’ Thériault is one of the most fabled heavyweights in minor professional hockey history and only last year ran roughshod over the Ligue nord-américaine de hockey (LNAH), a boisterous Quebec circuit where ice spawns fire. For anyone who’s watched him patrol the wing in person, and seen his convulsive, menacing style firsthand, it’s an experience they’re unlikely to forget. This makes Thériault’s venture into professional boxing fascinating news.

To watch Joël Thériault play hockey is to cede your attention to him at every other player’s expense. At 6’4 and 250 pounds, he is usually the largest man in uniform and always the most intimidating. The audience’s collective pulse quickens when he steps onto the ice because anything can happen, and often does. Impressively mobile for his size, “The Animal” hits and fights with uncommon wildness, and those skeptical of the impact fear provokes should witness the demure body language he fosters in opponents. Thériault has this effect because two decades of work substantiate his reputation. A staggering 413 bare-knuckled fights against hardened fellow heavyweights—most of them staged with a violent, quick-fisted abandon—forge a daunting resumé.

Thériault’s popularity alone should ensure a fine turnout on Saturday, and he knows promoters are interested partly so they can reach new fans. His opponent, a Pole named Kamil Kulczyk, is 1-0 and little known to the fighter or his handlers. While Thériault likely won’t face a destroyer in his debut, Kulcyk is a challenge he’s taking seriously. “I see him as a professional boxer,” he says. “I’ve got to keep my hands up, be quick. I’m working on my counterpunching. I’m getting mentally ready to go to war.”

In technique and strategy, a boxing match is nothing like a hockey fight and Thériault draws a sharp distinction between the two. “In a hockey fight you put your head down because you know you’re going to get hit and you keep throwing. I don’t have that much strategy in hockey. I’m emptying the tank: it’s pure balance and pure aggression, but in boxing you have to be more composed. In a boxing match, if you empty the tank you can get really hurt, so you have to be calmer, more patient, and manage your energy.”

Thériault earned a spot on Saturday’s card, which is headlined by rising prospect Erik Bazinyan, after being brought to Rixa Promotions by a matchmaker familiar with his hockey past. (It should be noted that he’s not completely done with hockey, and Thériault says he’ll return to the LNAH this year.) Rixa’s Max Fortin says the company is taking a fight-by-fight approach with “The Animal”, who has had a short, successful amateur career, and if things go well the company is interested in future opportunities.

“There’s a buzz. People want to see him. You never know what’s going to happen with Joël. He’s explosive. He’s got a little something.” That ‘something’ is a charisma, better experienced than explained, in which belligerence and danger alchemize appealingly, and it remains with one long after the performance is over.

Because his boxing career is starting at an age when most end, the nearly 40-year old fighter has realistic objectives. He dreams of someday appearing on a pro-am event with his son, who is also an aspiring fighter, or on the undercard of an arena show. Otherwise, Thériault’s motivation is simply to entertain the people whose workmanlike ethos he embodies.

“I want fans to say I gave everything I had,” he says. “Tickets are from $60 to $100 dollars. I have a lot of friends who work for $15 to $23 an hour, and I want them to get their money’s worth. I’m going there with the heart of a day journeyman, and I’m going there to work. This is what I do. The people pay to have a show and they want fighters who put their balls on the line. I want ’em to say, ‘When I go to see Joël Thériault, he always brings his fuckin’ balls to the ring.’ I want ’em to remember me as a guy who respected the ones who paid for the tickets.”

While ‘The Animal’ isn’t delusional about his long term prospects, there’s no reason he can’t draw successfully on a local level. There is a paucity of heavyweight talent in boxing and the Canadian pool is no deeper. None of his early opponents will enjoy the same notoriety or support, nor should they exceed his physical advantages. If undertaken properly, Thériault’s nascent career could be a marketer’s dream. He is one of the few athletes whose style can monopolize a fan’s attention and entice them to return. If he’s matched well and promoted creatively—marketed, perhaps, as an experience—‘The Animal’ may enjoy a successful second act in sports.

Thériault has a justly fearsome reputation on the ice, but he is an easy man to speak with. Affable and forthright, he answers questions directly and in detail, demonstrating impressive powers of self-expression while communicating in English, his second language. He knows precisely why he fights, and approaches boxing as a life-affirming act whose vitality he’s addicted to. “I think every warrior has something different in themselves than the rest of their community,” he says, accenting the latent individualism in every combatant. For Thériault, fighting is a drug, in which time stops and the external world is reduced to him, his opponent, and their mutual resolve to push personal limits.

Though his reasons for fighting remain the same, Thériault approaches boxing with a slightly different mindset. “What I want to bring is humility. Just the humility of being really, really real. The dog that doesn’t bark when he’s cornered is always the dangerous dog,” he says dismissing the effectiveness of tough guy posturing in boxing. But his aggressive mentality remains, and “The Animal” promises that he will never coast to victory and by doing so rob fans of the visceral experience they seek. To this end, he maintains that success in boxing can’t be measured in victories, but whether his appearance is profitable for fans and promoters alike. This is a philosophy traceable to his hockey roots in the spectacle-oriented LNAH, in which mounting a memorable ‘show’ is the ideal.

In places like Thetford Mines, Jonquière, Rivière-du-Loup, and Sorel, Joël Thériault is one of the hockey’s last alphas: an overwhelming presence whose power and fury gesture to a different state of being. Now he returns to the mythological Québécois fight culture that sprung his legend to impose himself in a new way. It is from this culture that he cast a style so inimitable to be worth the price of admission alone. And by all accounts, tickets are going fast.                              — Eliott McCormick 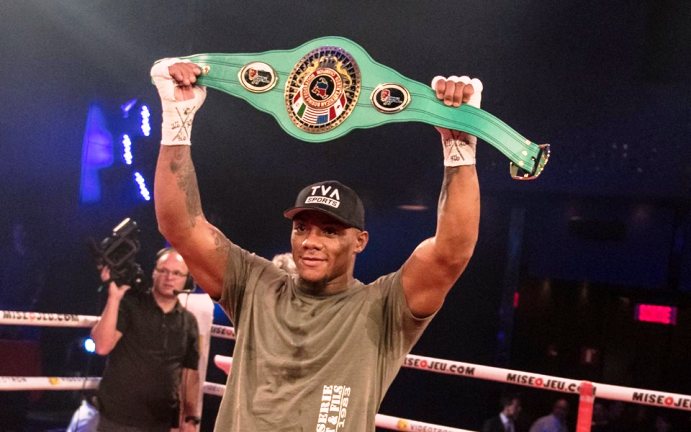 Rivas And Phinn On The Rise 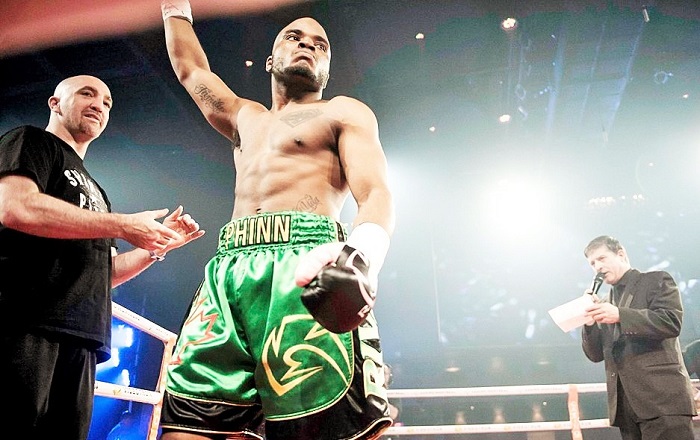 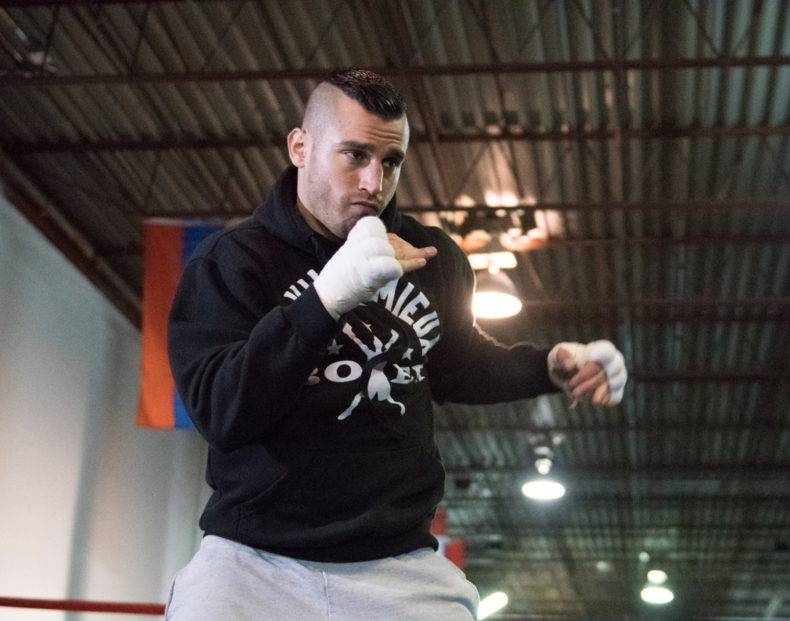 Can David Lemieux Reinvent Himself?