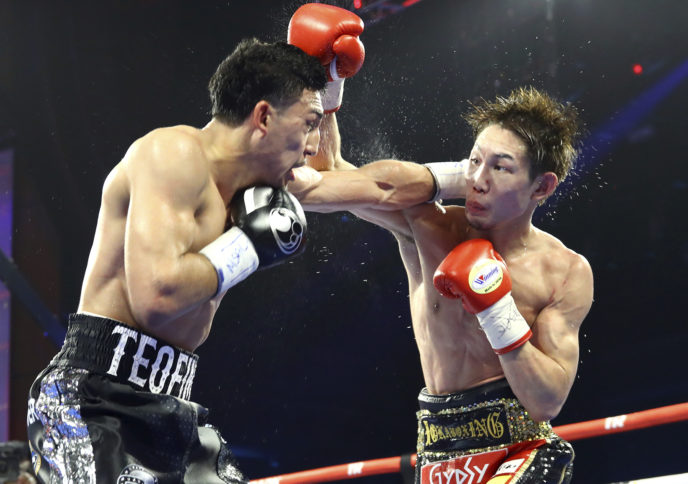 The only thing better than highlight reel knockouts are highlight reel knockouts delivered on a regular basis. At age 21, Teofimo Lopez finds himself at the precipice of stardom for that very reason; he’s a regular performer, and he plays to the fans. Fighting for the third time in 2019, Lopez headlined his second ESPN/Top Rank card, and did so for the right to challenge for the IBF lightweight championship later this year against Richard Commey.

His opponent, Japanese 135 pound champion Masayoshi Nakatani, was all too eager to steal the show at the MGM National Harbor in Oxon Maryland. The taller Nakatani’s jab immediately became a factor in the fight, touching Lopez upstairs frequently and offseting “The Takeover’s” rhythm. Lopez’s power began to stand out in the fourth, as he rocked the Japanese contender with combinations but Nakatani continued to bring the fight to Lopez, walking him down and closing the gap to land solid right hands.

The Japanese champion began to carry the fight in the middle rounds, backing up Lopez and using his ranginess to prevent Teofimo from effectively countering. Nakatani had perhaps his best round of the fight in the tenth, landing several huge right hands but he failed to hurt Teofimo, who rolled with the punches and held effectively to thwart Nakatani’s attack. Lopez closed strong as he went for the knockout in the final round, but Nakatani gamely weathered the storm and made it to the final bell.

The Fight City saw the action 116-112 for Lopez, as the youth’s ring generalship and clean punching carried the fight for most of the rounds. However, the three official judges hardly saw it in accordance with most of the viewers, as two had it 118-110 and one had it 119-109 for Teofimo. Not a huge surprise given the pressure to turn Lopez into a star, but Teofimo nevertheless gave an honest assessment of his performance following the decision.

“I just need little tune-ups. It’s part of the process … my first main event. It was twelve rounds. Am I proud of it? No, but I’m proud that I showed everyone I could go twelve rounds.”

Going forward, Lopez is looking for his first world title shot against IBF lightweight champion Richard Commey sooner than later. “We’re going to make the fight happen with Richard Commey, and then after that, we’re getting all four belts with Lomachenko,” said Lopez, who didn’t appear deterred by the adversity he faced against Nakatani. And while Lopez didn’t put forth his most spectacular performance to date, promoter Bob Arum still expressed satisfaction.

“It was a good performance,” said Arum. “I wanted him, when he had the guy going, to put the pedal down. [But] the good thing that comes from this is that we know he can go twelve rounds.”

The co-feature saw two extremely hungry 13-0 junior-welterweights square off in a crossroads battle. A terrific see-saw affair throughout, the perpetual aggression and work rate led Puerto Rico’s Subriel Matias to win the war of attrition after Maxim Dadashev‘s corner signaled surrender before the final round. Dadashev used his movement and boxing ability to win rounds, but ultimately appeared to break down under a withering body attack from Matias, who had Dadashev hurt downstairs as early as round five. 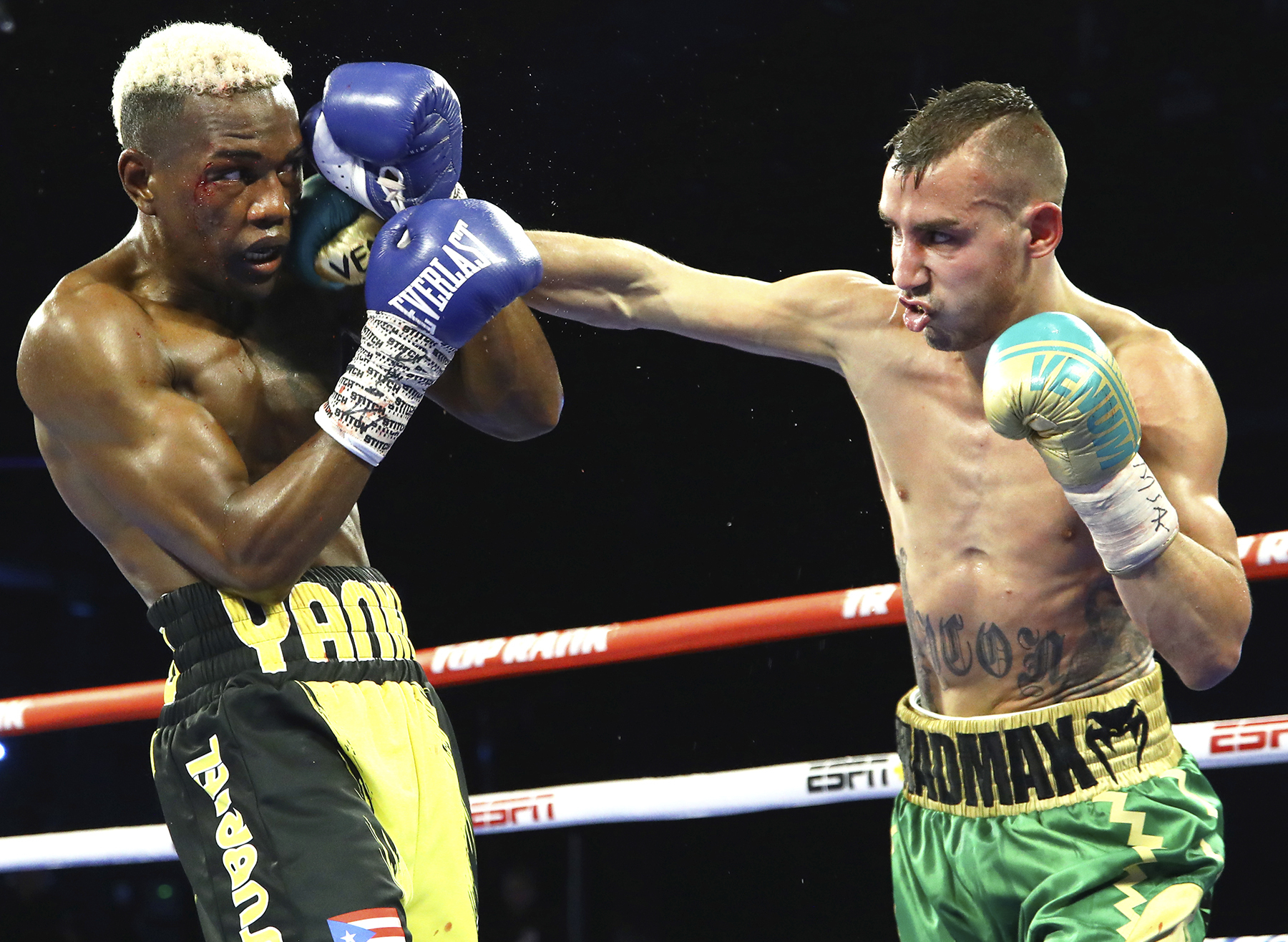 A war broke out in round nine as both men, clearly winded and battered, engaged in a furious exchange and in round eleven Dadashev appeared finished as he staggered about the ring and could barely make it back to his corner at the bell. Trainer Buddy McGirt then stopped the contest between rounds.

“Now that I won, I am focused on becoming a world champion,” said Matias who improves to 14-0, all stoppage wins. “I hope that Maxim is alright. He is a great fighter and a warrior.” Dadashev had to be carried out of the arena on a stretcher following the fight and was taken to the hospital where he underwent brain surgery to reduce swelling and combat a subdural hematoma. More news to follow on Dadashev, but on behalf of The Fight City, we wish this warrior a speedy recovery.

Hometown favorite Dusty Harrison continued his campaign on the comeback trail with an impressive seventh round stoppage over Columbian journeyman Juan De Angel. Harrison, who told The Fight City earlier this month that he intended to use this match as an opportunity to get some rounds under his belt, did exactly that early on, boxing intelligently behind his jab. In round five Harrison began to string his punches together and close the gap, punishing De Angel with looping right hands and painful body shots. Harrison was purely on the hunt by round seven, walking down a battered De Angel and eventually knocking him down with a straight right hand. De Angel got to his feet, but was in no shape to continue, and the referee called a halt to the action accordingly. Harrison improves to 33-0-1 (19 KOs), with his third appearance in 2019 after more than a 30 month hiatus since 2016.

In the night’s first swing fight, Rolando Vargas improved his record to 3-0 (3 KOs) with a second-round stoppage over Nathaniel Davis. The taller southpaw Davis wasn’t able to keep Vargas at bay, as Vargas leveled him in round two with a series of left hooks and straight lefts before the referee called a halt.

In a farcical, short-lived heavyweight affair, unbeaten Cassius Chaney (16-0) harpooned Joel Caudle in one round after knocking Caudle out of the ring. Caudle somehow made it back into the ring before the count of twenty, but soon after the referee called a halt to the mismatch.

Unbeaten Tennessee native Tyler Howard won a hard-fought unanimous decision after eight rounds against Philly journeyman Jamaal Davis. Howard landed crisp, flush punches upstairs all night, but failed to get much of a reaction out of Davis, who mounted a comeback of sorts in the late going.  Howard made it to the finish line though and won the decision to improve to 18-0 (11 KOs).

In a very close fight, Tyler “The Golden Child” McCreary (16-0-1) held onto his unbeaten record via a split decision over the game Jessie Cris Rosales. Rosales was coming off a knockout defeat to Shakur Stevenson earlier this year, yet showed little reluctance to take the fight to McCreary and set the pace. But it was McCreary who was effective with his jab and appeared to land the more meaningful punches as he took the close points win.

And in the first fight of the night, Brazilian middleweight prospect Esquiva Falcao scored an eighth round stoppage of Jesus Gutierrez. Falcao had the upper hand throughout, and scored the first knockdown in round eight with a one-two combination. Gutierrez barely beat the count, and was pummeled in his corner until referee Dave Braslow saved him from further punishment. Falcao improves to 24-0 (16 KOs).           — Alden Chodash 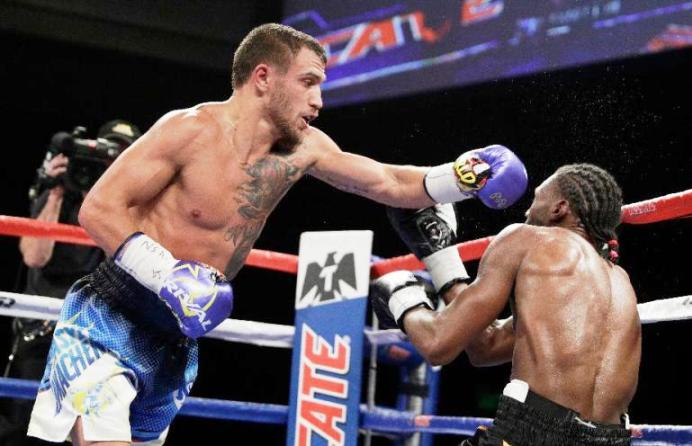 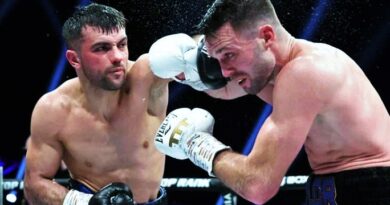