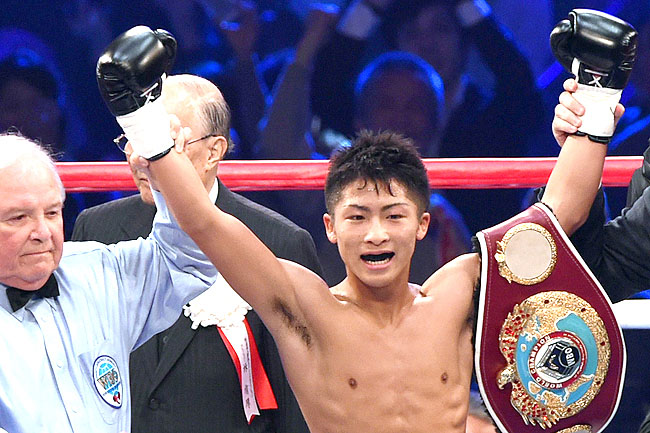 After a year largely devoid of compelling, high profile match-ups and public anticipation, it shouldn’t come as a great surprise to realize few boxers really made a huge impact on the sport. Ideally, a Fighter of the Year is someone who has not only achieved something remarkable, but also surprised us in some way and altered the boxing landscape.

Mauricio Herrera came very close to doing so. Danny Garcia, fresh off an impressive victory over Lucas Matthysse, appeared poised for stardom and Herrera was supposed to be just a stepping-stone for his Puerto Rico homecoming. Instead the crafty “El Maestro” spoiled the party. And while the ringside judges tried to follow the A-side/B-side script, those at ringside saw the challenger as the more effective boxer, most scoring him the winner by a clear margin.

That should have been the Upset of the Year which would have set up an immediate rematch and a huge payday for Herrera. Instead he fought Johan Perez for a fraction of what a champion should earn before being robbed a second time in his bout with Jose Benavides in December. But we refuse to let crooked judges distort reality, not to mention our sense of fairness. Mauricio Herrera is on our Fighter of the Year shortlist because he earned the distinction and we don’t want anyone to overlook the injustice done to him. His nomination is both an endorsement of his talent and dedication, and a protest against the putrid cesspool that is boxing politics.

Our other nominees offered something in the way of surprises as well. Sergey Kovalev startled many with his dominant performance against Bernard Hopkins. His wins over Cedric Agnew and Blake Caparello count for little; what does is the fact that Kovalev defeated Hopkins and did so in dominant fashion when most pundits were reluctant to pick against “The Alien.” All three wins by Amnat Ruenroeng’s could be viewed as upsets as the inexperienced yet long-in-the-tooth Thai fighter knocked off one big name after another, his run culminating in a huge win over two-division titlist Kazuto Ioka. And Roman Gonzalez surprised us less but continued to impress us, as the Nicaraguan maintained his run of excellence, moving up in weight to stop highly-regarded Akira Yaegashi.

But perhaps the most amazing surprise of the year came near its very end, on December 30. And similar to Kovalev’s shutout of Hopkins which won our Performance of the Year award, what startled us was not so much the fact that a relative novice moved up in weight to conquer an experienced champion, but more the dominant nature of Inoue’s victory. Because Inoue, in just his eighth professional fight, didn’t just defeat long-time titlist Omar Narvaez; he demolished him, with as impressive a body-punching performance as we have seen in recent years.

Simply put, no boxer in 2014 achieved as much as Naoya Inoue. And yet prior to his match with light-flyweight titlist Adrian Hernandez, few outside of Japan, where his moniker is “Monster,” had heard of him. Mexico’s Hernandez was a tough, proven champion with seven title wins to his credit, his only losses to fellow capable champions Oscar Ibarra and Kompayak Porpramook. And there was Inoue, in only his seventh professional boxing match, not just competing, not just winning, but dominating.

Like an unknown singer on The X Factor blowing everyone away the second she opens her mouth, Inoue, right from the opening bell, shocked everyone with his confidence and assertiveness. He swept the first four rounds with constant aggression, excellent timing, astonishing accuracy and damaging power. Like a pint-sized George Foreman, the heavy-handed challenger showed Hernandez no respect, landing thunderous blows and battering the champion from one side of the ring to the other. To his credit, Hernandez came back in round five, briefly seizing the initiative and connecting with some strong left hooks, but if anyone expected the inexperienced challenger to succumb to the pressure, they were mistaken. The 21-year-old responded to the attack, landing his own heavy shots in return.

And in the very next round, Inoue again took charge, deciding matters with another two-fisted assault, a powerful right hand finally putting the brave champion down, who rose but clearly could not continue. Amazingly, in just his sixth professional fight, Inoue was a world champion. In September he defended against Thailand’s tough Samartlek Kokietgym in Japan and while Inoue won with relative ease, he lacked the sharpness he had shown against Hernandez. Inoue blamed this on the struggle to make weight as he made it known this would be his final contest at light flyweight.

Despite Inoue’s impressive dismantling of Hernandez, no doubt many observers were wondering if the inexperienced power puncher was setting himself up for a boxing lesson and a major setback when he agreed to next face super-flyweight king Omar Narvaez. The signing shocked many boxing pundits in Japan, some wondering if the young Inoue was underestimating the experienced and capable two-time champion, a tough veteran of some 30 world title fights, his only loss a decision defeat to hard-hitting Nonito Donaire. Suffice to say, no one anticipated what took place this past December.

To say Inoue defeated or knocked out Narvaez would be a massive understatement; he demolished him. From the opening bell he dominated, his astonishing power and accuracy allowing him to control every aspect of the fight and keep the Argentinian on the defensive. It was a completely one-sided battering. Inoue’s body punches, unerring missiles of pain, landed again and again, setting up the blows aimed upstairs. A right hand to the head put Narvaez down just thirty seconds in. A left hook floored him thirty seconds after that. In the second a left hook to the body put Narvaez down again, and at the end of the round another left hook, this one to the liver, ended the fight. Narvaez collapsed and was counted out.

And right then and there, Naoya “Monster” Inoue became 2014’s Fighter of the Year. His accomplishments in 2014 are simply unmatched. His win over Hernandez was impressive enough, but his moving up two divisions to destroy Narvaez is akin to Manny Pacquiao moving up in weight to dominate and knockout Ricky Hatton in 2009 (in fact, arguably more impressive considering Narvaez’s record and experience). Except Inoue did it in just his eighth professional contest!

The simple fact is, Inoue has accomplished more in a span of just eight fights than any other boxer in the history of the sport, and that statement takes into account Leon Spinks who defeated the great Muhammad Ali in his eighth pro bout. So how can Inoue not be our Fighter of the Year? Don’t be shocked if we’re saying the same thing next year, because at this point in time it’s difficult to imagine who or what can stop this young warrior.              — Robert Portis 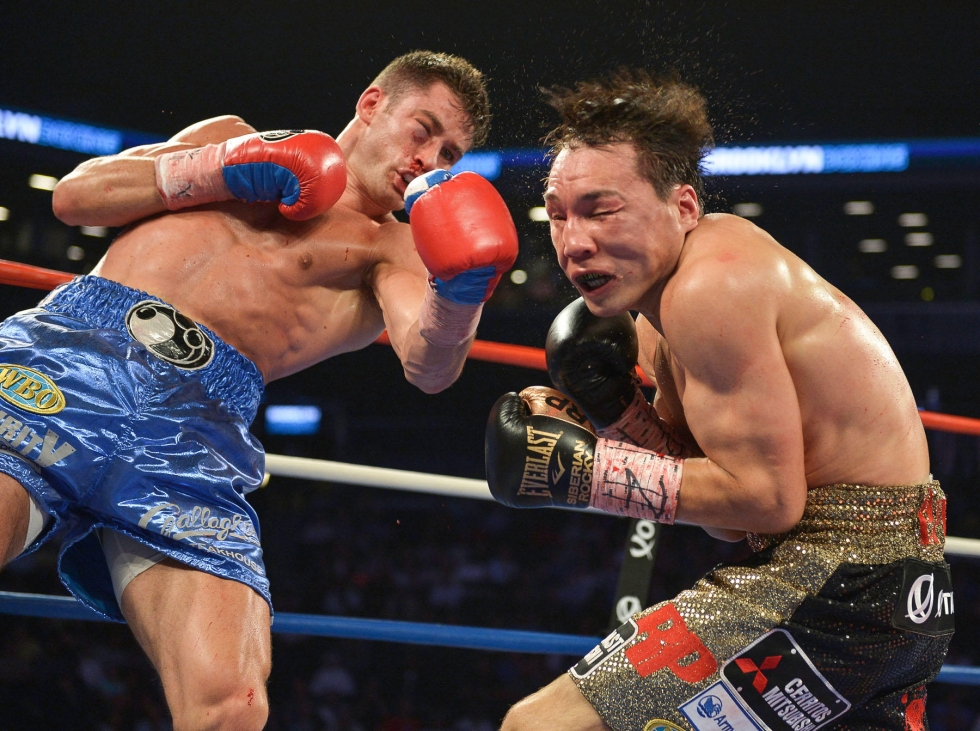 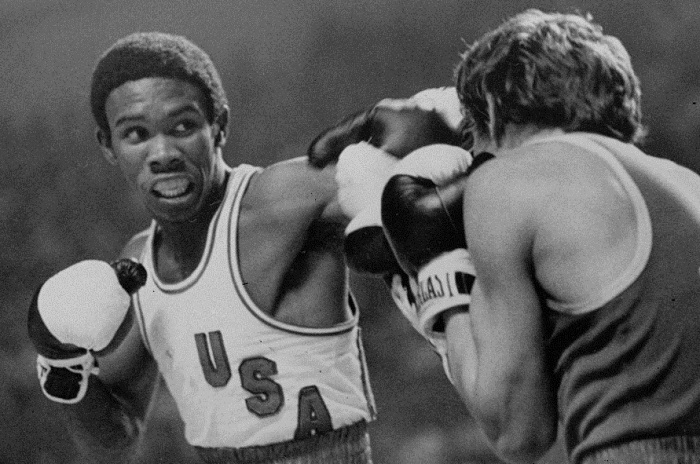