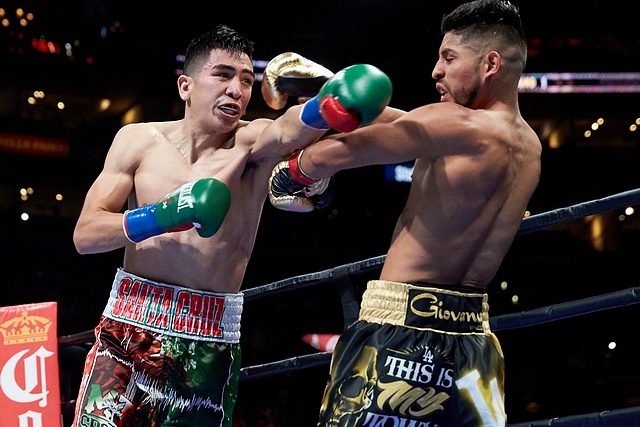 With Mexican Independence Day just weeks away, two fights served as timely fistic reminders of the violent splendor Mexico regularly contributes to boxing. The man who dared to reach the farthest, Leo Santa Cruz, gained the most in taking his record to 31-0-1 and 17 knockouts, earning a majority decision over Abner Mares at the Staples Center in Los Angeles.

As it turned out, odds-makers weren’t far off the mark in making Santa Cruz, Huetamo, Michoacan, a favorite to stay undefeated, though Mares, 29-2-1 with 15 knockouts, did his best to discourage the younger man from gaining much momentum. Both fighters collided with a thud to begin the fight and Mares immediately began pushing Santa Cruz around the ring, which also served to handcuff the latter as he appeared confused by the inside tussling and clinch fighting. It continued into rounds two and three, none of them clear rounds though Mares likely had the momentum with his scuffling, and both men were cut by a headbutt as they jockeyed for position.

The price of Mares insisting upon fighting his way was his stamina, which temporarily abandoned him in round four. Mares retreated and clinched not to score but defensively, and Santa Cruz seized upon that opportunity to land his jab. Not far behind the jab was a right hand, then a left hook to the body, and before long the fight’s entire dynamic had changed as Santa Cruz stalked, attempting to line up something dangerous. Mares’ inability to consistently get by Santa Cruz’s jab took away much of his effective offense, so it devolved to lashing out as he moved back.

In round eight Santa Cruz became the aggressor, physically pushing Mares backwards inside and absorbing the return fire to step in and land more, and at the bell Mares walked to his corner shaken up from an uppercut and right hand. Likely a result of the tough previous round, Mares got wild with his offense in the ninth and Santa Cruz jabbed him for it, confirming that he had assumed command of the match.

Throughout the contest and building to a sort of crescendo, the fighters squared up and traded combinations without much regard for what came back. It was as if the two boxers truly didn’t like one another, and Mares capitalized on that animosity to muck up the action in the closing round. It didn’t help him enough; the gnashing and pulling inside earned Mares another cut near his eye in the 10th and his punches weren’t landing clean.

Whether through hatred or just wanting to win badly, the final round saw both men hooking, trading shots inside and then outside before getting a brief rest in the clinch. The more than 13,000 in attendance cheered the fight to the bell, and Santa Cruz and Mares ended the fight punching.

One card scoring the fight 114-114 was overruled by two scores of 117-111 for Santa Cruz, who demonstrated a greater degree of control than expected over his best opponent to date. He had to fight hard to win his portion of the rounds, and he was made to work through being cut, his eye swelling up and an uncomfortable start. Santa Cruz has now shown he can succeed at this level, even if there doesn’t appear to be much for him in the Premier Boxing Champions stable at featherweight. A move back down to meet Carl Frampton, however, whets the appetite.

Biting down and swinging away wasn’t a sufficient game plan for Abner Mares once Santa Cruz started throwing his jab. A smaller featherweight without much punching power, Mares then has to find ways to get inside and stay there, not retreat against a rangier opponent, staying on the end of his punches. It’s unclear what revamping Mares can do after this loss, but unlike the Jhonny Gonzalez fight, this was not an embarrassing defeat.

Not to be overlooked, Julio Ceja got off the deck to halt Hugo Ruiz in the fifth round of what could have easily been the “Fight of the Year” had it lasted longer. After a slow start from both fighters, Ceja, 30-1 with 27 knockouts, found the proper distance and walked Ruiz into hooks in round two. With one minute remaining in the third, Ceja ate a left hook that collapsed him, and after beating the count he was trapped in the corner and getting tagged though trying to fight back. It was the first time Ceja had ever been knocked down.

Rather than press, Ruiz tried to counter Ceja in round four and it let the latter get his bearings back. In the fifth a devastating hook sent Ruiz down and robbed him of his legs. He got up, but was unsteady and tried to fight his way out of being hurt. His basic errors ended his night, and he was rocked back into the corner as the referee intervened. Ruiz falls to 35-3 and 31 knockouts. 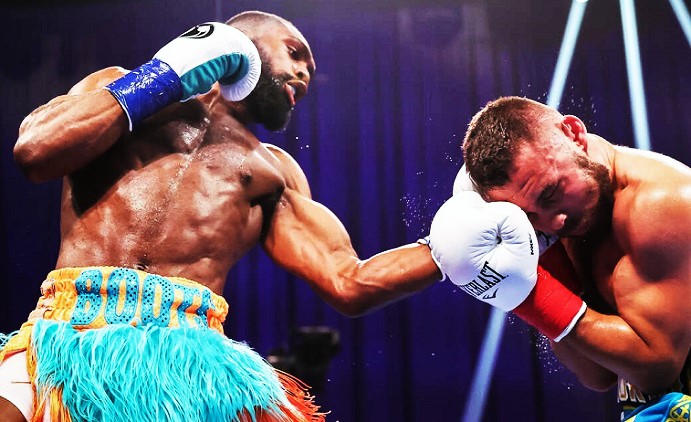 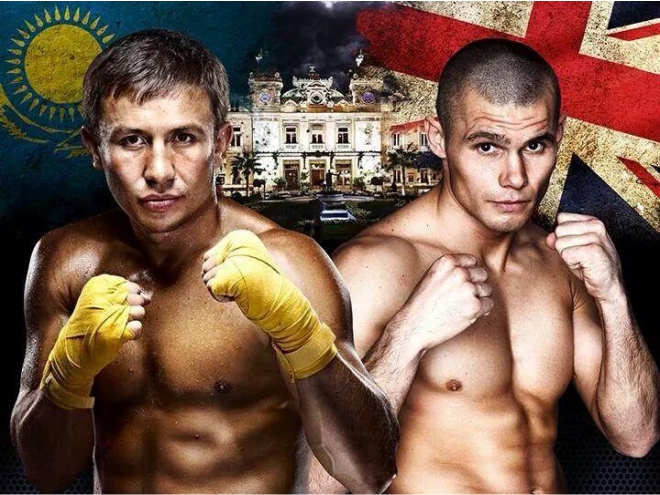 One thought on “Violent Splendor: Santa Cruz vs Mares”