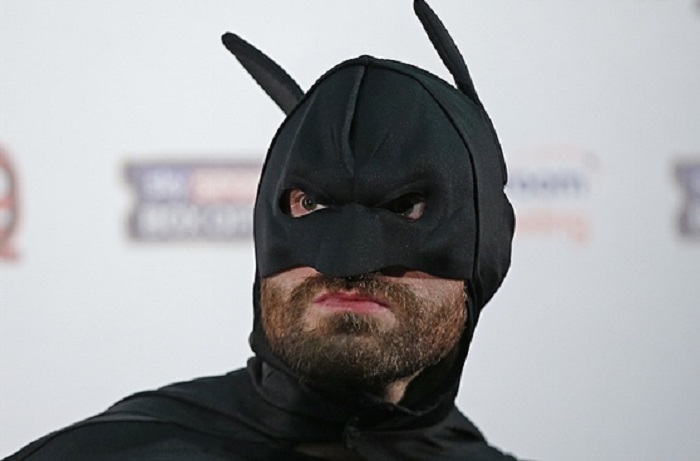 As noble and gentlemanly as the sport of boxing can sometimes be, one of the biggest draws in pugilism tends to be the spectacle. There’s just something about the circus and the tent revival aspects of boxing that captivate an audience; the sheer absurdity of it all entrances the masses like a witchy tune, as Tyson Fury’s recent superhero routine showed us. His antics inspired us to put together a list of the dozen most ambitious or wacky maneuvers ever pulled by boxers or their handlers in an effort to attract attention and hopefully increase ticket sales.

12. Dingaan Thobela’s green thumb: Before becoming “The Rose of Suweto,” South African lightweight (and later super middleweight) contender Dingaan Thobela was known as “Sanchez” Thobela, courtesy of his trainer Norman Hlabane, who thought his charge’s style was similar to that of the late featherweight champion Salvador Sanchez. It was a welcome nod to a great fighter but would do little for Thobela’s image, so his manager Jim Harvey and promoter Thinus Strydom found another way to gain attention: women. Thobela would dress in suits and tuxedos and pass out roses to the ladies sitting ringside, pushing the notion that he was a sort of ladies’ man. It worked, though Thobela actually fought his way to a shot at Tony Lopez’s title. He did, however, manage to piss Lopez off by handing the champion his last flower just before their rematch, which Thobela won.

11. Roy Jones Jr. channels a Disney Villain: It took a long time for Roy Jones Jr. to lose properly. Following his bogus loss in the gold medal round of the 1988 Olympics, Jones’ only loss in 15 years as a professional was to the tricky Montell Griffin by disqualification. The controversial defeat brought out Roy’s alter-ego, a character he called “R.J.,” who was far more cruel and vicious than the normal guy who sometimes carried over-matched opponents out of and apparent fear of harming them, and Griffin was demolished quickly. In 2009, Jones arrived to a pre-fight press conference dressed as Captain Hook, the “Peter Pan” villain. Apart from being bizarre, the metaphor actually fit as Jones was fighting fellow Floridian Jeff “Left Hook” Lacy on a card called “Hook City,” and himself had knocked out several opponents with his hook. Jones trotted the look out against a few more opponents, sometimes with a wig, sometimes not, but it was always disturbing.

10. “Tex” Rickard brings the lightweight title fight to Goldfield: Famed promoter George “Tex” Rickard was the kind of person who went where the money would be. While in Alaska during the Klondike Gold Rush, Rickard became friends with lawman and boxing fan Wyatt Earp, eventually reuniting with him in Goldfield, Nev. when gold was discovered there in 1902. Four years later Rickard headed up a “syndicate of mining men” who offered $30,000 to stage the first meeting between Joe Gans and Battling Nelson, mostly as a way to promote the booming Nevada town, which had grown to become to most populous in the state with 20,000 residents. With gate receipts totaling almost $60,000 the controversial DQ ending didn’t matter, and it quickly became clear to Rickard that fast money could be made in the fight racket.

9. Tami Mauriello hosts a stereotype-filled tea party: Prior to facing Yorkshire native Bruce Woodcock, heavyweight contender Tami Mauriello trained at Bobby Gleason’s Bronx gym. He sparred, he hit the bags, and then he slipped into a top hat and tailcoat and sat in the ring’s corner for what he called “a Limey’s crumpet and tea party.” Mauriello stirred his tea with effeminate irreverence, exaggeratedly raising his little finger when drinking. In mid-1946, with World War II still quite fresh in the global consciousness, one might not expect that an American would treat British custom with open mockery. But being that this is boxing and not much is held sacred, Mauriello did it with a wide grin on his face and then went on to stop Woodcock in front of 14,000 fans at Madison Square Garden.

8. Muhammad Ali raids the produce section: After four losses, and two in a row to Sonny Liston, former heavyweight champion Floyd Patterson was considered washed up in 1963. But after taking it slow on a comeback Patterson was set to face tough Toronto native George Chuvalo in early 1965. The new champion, brash youngster named Muhammad Ali who hadn’t yet caught on with much of the public, arrived at Patterson’s training headquarters in New York to heckle him. After repeatedly calling Patterson a “scared rabbit,” Ali then revealed that he had brought with him two heads of lettuce and a bag of carrots to feed “The Rabbit.” When Patterson turned to reporters and referred to Ali as Cassius Clay, the scene turned ugly and an actual fight almost exploded. Ali’s anger carried over into the fight, and he punished Patterson with a 12th round stoppage.

7. Nikolay Valuev tries cryptozoology: At 7-foot-tall and over 300 pounds, Nikolay Valuev was by far the largest heavyweight titlist boxing has ever seen, and as expected, cruel nicknames and comparisons followed him wherever he went. Valuev’s startling appearance made it easy to dismiss the Russian as a sideshow act, even if he demonstrated surprising skills for all his mass. After having been carefully guided to a WBA heavyweight belt twice, in 2009 Valuev geared up to face David Haye, who he outweighed by 99 pounds. When hunters in the Kemerovo region of Russia reported seeing “hairy humanoid creatures” two months before the fight, for some reason Valuev was very eager to join an expedition to look for them, even telling the BBC that finding them would be a miracle. However the only miracle in his midst was at his expense as Haye took the belt.

6. “Tex” Rickard one-ups himself in Jersey City: Even before Rickard got into promoting fights he was a keen businessman, albeit with a gambling problem. But it was really in 1919, when Jack Dempsey violently seized the heavyweight title from Jess Willard in Toledo, Ohio, that Rickard began to hone his promotional genius. After that he successfully promoted cards featuring bantamweight contender Joe Lynch and lightweight champion Benny Leonard, but “Tex” wanted bigger and grander, and he went after French star Georges Carpentier to make it happen. Said Ion Grumeza in The Gentleman Boxer, “After spending $325,000 for hiring 500 carpenters with 400 helpers who used 2.3 million feet of lumber, [Rickard] built an octagonal stadium of 300,000 square feet, with the ring platform in the center, ready for The Fight of the Century.” The construction alone took two months and was given regular newspaper coverage. Dempsey would topple the French idol in a hugely successful fight, and the arena at Boyle’s Thirty Acres would host several significant fight cards.

5. Shelby makes a costly miscalculation: Similar to Goldfield, Shelby, Mont. was sparsely populated until the discovery of natural resources to exploit in the area. An oil boom led to an uptick in the town’s population, but not its notoriety; nicknaming Shelby “The Tulsa of the Northwest” apparently wasn’t enough of a draw. So real estate speculators James “Body” Johnson and Mel McCutcheon made a half-serious offer to heavyweight champion Jack Dempsey’s manager Jack “Doc” Kearns to host a title defense against Tommy Gibbons. Kearns not only accepted the offer, he drove a bargain so hard it broke the town. The fight itself was a bust, as Gibbons’ style didn’t lend well to an entertaining fight, and the financial hit taken by the town set off a chain of bankruptcies in the state. The arena built by Johnson and McCutcheon was even torn down and sold for scrap lumber so as to lessen the damage. Ironically Shelby has indeed become known for hosting a Jack Dempsey fight, but also the ruin that came with it.

4. Cus D’Amato dabbles in hypnotism: Even before Floyd Patterson’s two losses in a row to Sonny Liston it was said that Floyd had been carefully protected by his trainer and manager Cus D’Amato. And it made sense, because Patterson wasn’t big for a heavyweight and could be knocked down rather easily, and Liston had been a contender for a few years by the time he got his shot in 1962. Two weeks before their first fight, D’Amato requested a special meeting with the Illinois State Athletic Commission, in which he charged that magician and hypnotist Jimmy Grippo had mistakenly sent Patterson’s camp a letter addressed to Liston offering hypnosis therapy. D’Amato, worried that a hypnotized Liston would be impervious to pain, brought actor Marshall Brodien in as his own hypnotist. The spectacle culminated in Brodien walking across a woman he had allegedly hypnotized in order to justify D’Amato’s concern. Patterson was unable to last a full round against Liston in two fights.

3. Joe Louis signs with Liverpool: If there was one fighter in 1944 who didn’t need any sort of promotional boost, it was Joe Louis. With WWII reaching a fever pitch, the heavyweight champion was overseas fighting in exhibitions for the U.S. Army. In early July Louis arrived in Liverpool and played golf, which was arguably his favorite thing ever, and the next day Louis was signed on as an honorary team member of the Liverpool Football Club before sitting in on a training session with them. Said the Liverpool Daily Post, “What a draw this would be should he be called upon one day to lead the Liverpool attack.” In turn Louis sparred his old training partner Sergeant George Nicholson in an exhibition for men in the armed services at the Liverpool Stadium.

2. Marvin Hagler and Thomas Hearns help the I.R.S.: For boxing fans, April 15th is the anniversary of likely the best three-round fight ever, Marvin Hagler vs. Thomas Hearns. If you’re everyone else in the U.S., April 15th is the last day income taxes can be filed. In 1985 Irving Rudd, a publicist then working for Top Rank, came up with the idea of having the fighters capitalize on the fight date and shoot commercials for the Internal Revenue Service, urging Americans to file their taxes before the big fight and then “relax” knowing they had met the deadline. The commercial happened to be shot at Maryland’s Sugar Ray Leonard Boxing Center, so there was plenty of irony to go around. But it was a brilliant idea, and the commercial ended with Hagler telling Hearns, “There’ll be no relaxing for you, buddy.”

1. Freddie Welsh writes royalty, gets response: Though he was born in Wales, Welsh had come across the Atlantic as a teenage and established roots on his career in the U.S. He still fought in the U.K. a number of times, however, and had changed his last name to reflect a portion of his identity. A failed title bid in 1910 against lightweight champion Packey McFarland in London sent Welsh on a tear over the next four years, during which he defeated Mexican Joe Rivers. Following the fight Welsh wrote to King George V, a supporter of organized boxing at the time. “I took a chance and cabled him,” Welsh told reporters. “I’m not going back anyhow and I knew he’d never have a chance to run me off the dock. And, my word, what does the old boy do but slip me an answer!” The King replied with a gussied-up “thank you” through his assistant Clive Wigram. 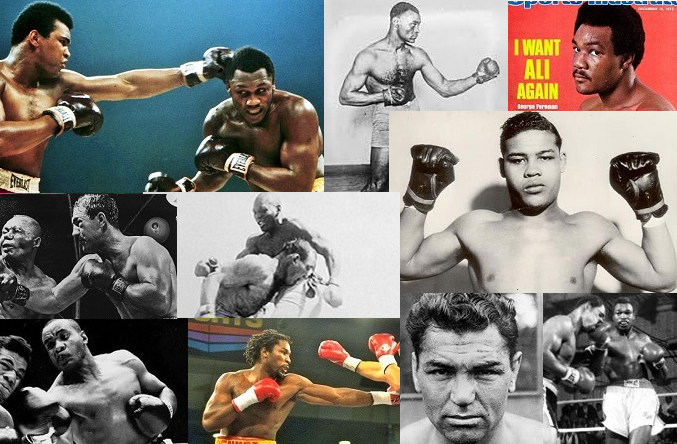 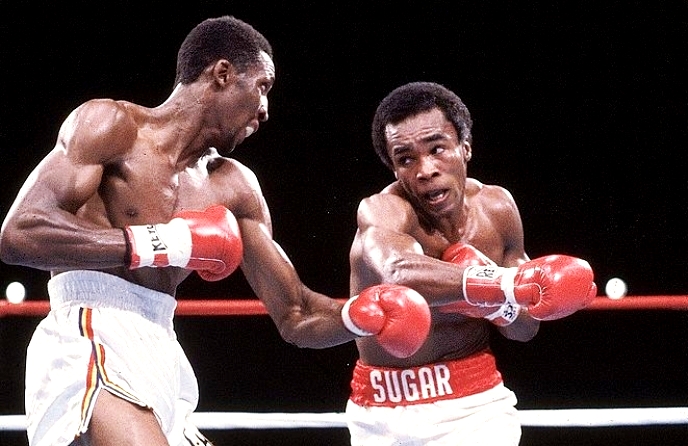