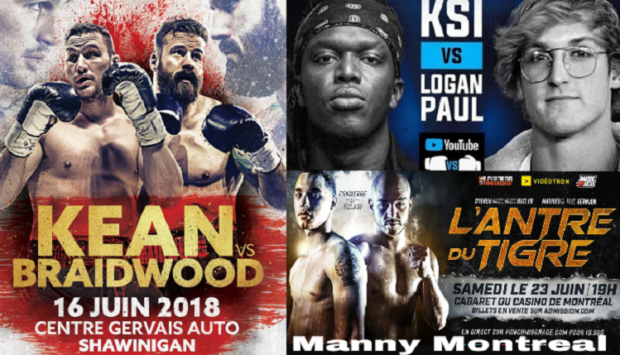 Welcome back to Manny’s Thoughts! Your weekly briefing on combat sports from Manny Montreal! Big thanks from Manny for those who made his journey to Shawinigan possible! Manny didn’t think he was going to make it but you people came through! Thank you! Congratulations to Eye Of The Tiger! Great show in Shawinigan! Manny had a great time! Amazing performance from Yves Ulysse! Simon Kean wins with that sharp jab! But Braidwood isn’t done! Will Ulysse find himself on the Golovkin vs Canelo II undercard? KSI vs Logan Paul! Manny’s talking about it because he wants more views! So: Logan Paul! Logan Paul! Logan Paul! Rumours of a schedule change for Pascal vs Bosse! Will Artur Beterbiev ever fight again? Will Adonis Stevenson actually face a mandatory contender? Logan Paul! Shakeel Phinn is heading to New Zealand! Check out all the photos on Manny’s Facebook page! Lots to watch on Friday and Saturday! Logan Paul! Garcia vs Murray! Postol vs Taylor! Steven Butler, Mathieu Germain and Ghislain Maduma in action at the Montreal Casino! Logan Paul! Please take a look at Manny’s Patreon page! Check it out:

“Who is Manny Montreal? Is he a journalist, a videographer, a hanger-on, or a bon vivant? Is he a professional photographer or just another Youtube personality, a glutton for attention, yet another internet diversion? Maybe all of the above, maybe none, but one thing we do know: the man has a deep and abiding love for one of the oldest cities in all of North America, the place they once called “Babylon on the St. Lawrence,” the city where he was born and raised, a city unlike any other. And the man knows his combat sports. He knows Montreal; he knows fighting. And he has a passion for both which few can match.”   From “The Legend Of Manny Montreal”