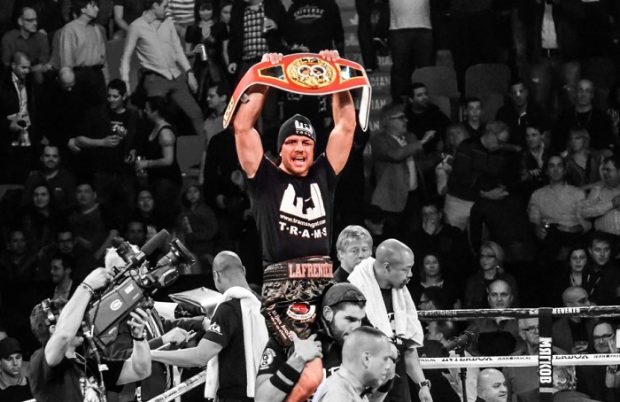 “Lafreniere appeared briefly stunned a couple of times by heavy power shots, but never looked badly hurt. He sustained a deep gash over his right eye, which the referee had examined by the ring doctor more than once, but which proved a minor factor, though by fight’s end both men were glossed in crimson. Every round was close and hard-fought but in the majority St Juste was outworked by a slim margin and at times staggered by the velocity of Lafreniere’s attack. It was a case of the more powerful and experienced boxer being overtaken by the unrelenting aggression of the younger man. Near the end of rounds nine and ten it appeared a stoppage win for Lafreniere was within reach, but St Juste refused to go down even as his legs bent and buckled.

At the final bell the two warriors embraced and the crowd rose to its feet and roared in a lengthy and thunderous ovation for both men. It was a thrilling battle, as well as a remarkable display of courage and physical sacrifice, and all present knew the chances of the main event matching it were pretty much zero. As it turned out, both Mikhaylenko vs Mayfield and Pascal vs Kovalev II were watered-down near-beer compared to the potent, cask-strength single malt that was Lafreniere vs St Juste. Their war stole the show, even if those watching on HBO had no idea, the network picking the wrong undercard fight to feature on their broadcast.”    — From From Lafreniere And St Juste Steal The Show