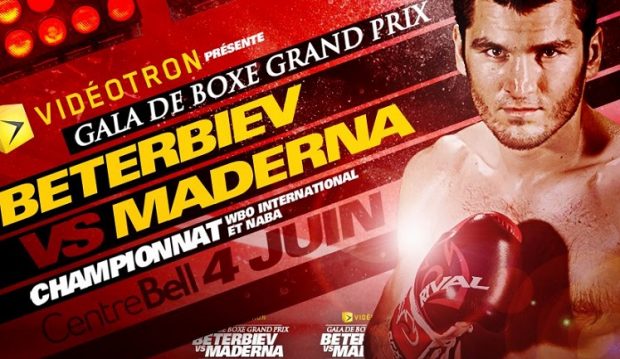 Time for Manny’s Thoughts! From Manny Montreal! Elephant in the room: positive PED test for Lucian Bute! No comment until we get the verdict on the ‘B sample’! Let’s focus on the good news! New pro prospect: Jordan Balmir! Congrats on his pro debut win! Big things ahead! Also, watch out for heavyweight Simon Kean; now 5-0! Great amateur gala at the Hard Knox gym with some fantastic fights! Manny Montreal to be on TV with Malik Shaheed and then taking photos at CHOM 97.7! Patrick Cote! Groupe Yvon Michel fight card Saturday night at the Bell Centre features the return of Artur Beterbiev!

The Return of King Artur!

Follow Manny on Facebook and Twitter to get up-to-the second updates on the weigh-in and the event. Manny’s run-down on everything to watch on TV: L.A. Fight Night! PBC on Spike: Rances Barthelemy vs Mickey Bey Jr! Cage Warriors: Marshman vs Arish! UFC 199: Rockhold vs Bisping! Get Manny’s pick! Don’t miss Tom Breese! Stacked undercard from GYM on Saturday! Don’t miss Dario Bredicean! Also Oscar Rivas! Grand Prix weekend in Montreal! Check out the vid: (Ed. note: nobody’s perfect! Manny definitely doesn’t want anyone to miss Francisco Vargas vs Orlando Salido on HBO! Make sure you DVR it! Potential Fight of the Year!)

“Some dismiss Manny as a “homer,” but they’re missing the point. They don’t get what Manny Montreal is all about. Because Manny is a fan, first and foremost, a passionate and knowledgeable fan, who, with a wing, a prayer, and some low-budget video equipment, is living every fight fan’s dream: hanging out at the gyms; taking ringside seats at the fights; following champion boxers to the ring and into their dressing rooms; having his say at the press conferences; shaking hands with people he admires, guys like Harold Lederman, David Loiseau and Bernard Hopkins. And representing the city he loves, the fighters he loves, to anyone who will pay attention.”