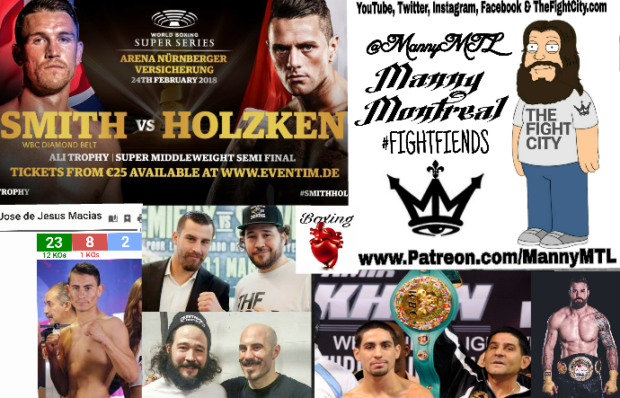 Time again for Manny’s Thoughts! Your weekly briefing on combat sports from Manny Montreal! This week: Congrats to Groupe Yvon Michel for another great show at the Montreal Casino! KO of the night from Bruno Bredicean! Fight of the night was the amazing slugfest between Jose de Jesus Macias and Mikael Zewski! Big congrats to Ray Beltran! He’s finally a champion! Adam Braidwood in The Fight City! Will we see David Lemieux vs Spike O’Sullivan on the Golovkin vs Canelo II undercard? Lots to watch this weekend! ACB 81! Busy Saturday: UFC on Fox! Superfly II! Rungvisai vs Estrada! Cuadras vs Arroyo! Smith vs Holzken on World Boxing Super Series! Take a look at Manny’s Patreon page! Check it out:

“Some dismiss Manny as a “homer,” but they’re missing the point. They don’t get what Manny Montreal is all about. Because Manny is a fan, first and foremost, a passionate and knowledgeable fan, who, with a wing, a prayer, and some low-budget video equipment, is living every fight fan’s dream: hanging out at the gyms; taking ringside seats at the fights; following champion boxers to the ring and into their dressing rooms; having his say at the press conferences; shaking hands with people he admires, guys like Harold Lederman, David Loiseau and Bernard Hopkins. And representing the city he loves, the fighters he loves, to anyone who will pay attention.”     From “The Legend Of Manny Montreal”  Take a look at Manny’s Patreon page!