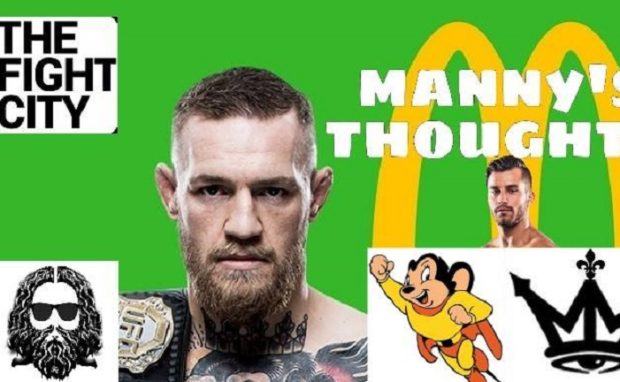 Time again for Manny’s Thoughts! From the one-and-only Manny Montreal! Congratulations to Conor Benn and Chris Eubank Jr.! Plus, major congrats to Demetrious Johnson! Amazing performance and he deserves way more respect! Tony Ferguson calls out Conor McGregor! “Defend or vacate!” Miguel Cotto set to fight Sadam Ali of all people! So David Lemieux is looking for a fight! Christian M’Billi in action on Thursday night! Tony “Lightning” Luis defending his belt in Cornwall, Ontario! Mohamed Soumaoro also on the card! Tons to watch this weekend! Maldonado vs Barroso! Bellator in Alabama! Glory 46! Marcus vs Pereira! Rico vs Bigfoot! Groves vs Cox! PBC on Fox! Showtime tripleheader from Barclays! It’s a great time to be a fight fan! Check it out:

‘See, Cotto learned the wrong lessons from his defeats to Pacquiao and Mayweather. Instead of hanging onto his integrity and the warrior ethos, he decided, “If you can’t beat ’em, join ’em!” I’m kind of shocked he hasn’t signed with Al Haymon, actually. Or gone to Vegas and just flat-out joined “The Money Team.”

‘Here at The Fight City, we talk about this thing called “Mayweather Disease,” which is when a boxer’s swollen ego so distorts his perspective that he believes a champion doesn’t owe anything to the fans or the sport, but instead boxing exists to serve him. Rankings? Mandatory title defenses? The best fighting the best? A champion competing more than once or twice a year? To hell with all that. “I’m the champion. I’m the A-side. And it’s about working smart, not working hard!”

‘[So Cotto] gave it all a long hard think and said: “What the hell am I doing playing by the old rules? Taking on the best. Listening to the fans. Listening to the networks. Actually giving a shit where I’ll end up in boxing history. Screw that. Look at Floyd! He never would have fought Trout! That guy knows what’s what! Minimize the risks! And embrace your inner diva! Manicures and pedicures! Take two hours to get dressed! After one day, underwear in the garbage! This is how you do it!”’             From “Greb And Robinson Are Spinning In Their Graves” by Robert Portis