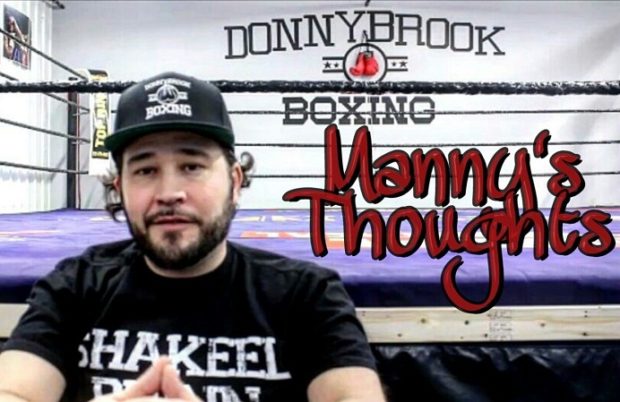 Welcome back to Manny’s Thoughts! From Manny Montreal! Congratulations to, among others, Jonathan Di Bella, “Monster” Miljas, Tom Vautour, and Miguel Cotto! Big Montreal Casino card going down tomorrow night featuring Shakeel Phinn and Jessica Camara! Patrice Volny in action in Toronto! Also Dwayne Durel and Chann Thonson! Adam Braidwood! Bogdan Dinu! Flavius Biea! Jean Pascal back in action in Florida! TKO MMA at the Bell Centre! Ryan “The Real Deal” Ford journeys to Russia on short notice to fight for a title! Luis Ortiz back in action! UFC: Swanson vs Ortega! Degale vs Truax! On HBO: Tevin Farmer vs Kenichi Ogawa and Orlando Salido vs Miguel Roman! And, of course, Lomachenko vs Rigondeaux! Solid undercard! Too much to watch! We are blessed! Support Manny and become a Fight Fiend! Check out Manny’s Patreon page! Watch the video:

Manny’s pick for Lomachenko vs Rigondeaux: “As usual the consensus will more than likely be with the Ukrainian, and as usual I have to buck the trend. I’m no fan of how Lomachenko got an easy ride to a title shot and the big money, whereas Rigondeaux got the complete opposite treatment. As usual, the smaller fighters don’t get the respect they deserve and, as usual, a great smaller fighter is forced to go up and battle outside his realm in order to reach the dollars and respect that the higher weight classes enjoy. The people picking The Jackal to win are true purists of The Sweet Science and in addition to that, I choose him out of respect. Rigondeaux by decision.”         —Manny Montreal